National hate group SPLC will fork over a huge sum to falsely accused, defamed anti-extremism activist. Is this the beginning of the end for this hate-promoting behemoth?

The Southern Poverty Law Center (SPLC) announced recently it would settle a lawsuit with a high-profile British Muslim politician and anti-extremism activist, who had sued the radical leftist organization late last year for defamation, a development this newspaper reported on at the time.

Maajid Nawaz, founder of Quilliam, which describes itself as the world’s first counter-extremism organization dedicated to promoting pluralism and combating extremism around the world, sued the SPLC after it labeled the popular Muslim reformer as an “anti-Muslim extremist.” In 2016, the SPLC included Nawaz and Quilliam in its widely disseminated and highly influential report on anti-Muslim activists entitled A Journalist’ Manual: Field Guide to Anti-Muslim Extremists.

Nawaz sued for defamation, and the SPLC eventually agreed to settle the lawsuit for a cool $3.375 million. Nawaz said the money would be used to bolster his organization’s mission of combating both “anti-Muslim bigotry and Islamist extremism,” according to a Fox News report.

“With the help of everyone who contributed to our litigation fund, we were able to fight back against the regressive left and show them that moderate Muslims will not be silenced,” Nawaz stated shortly after the lawsuit was settled. “We will continue to combat extremists by defying Muslim stereotypes, calling out fundamentalism in our own communities, and speaking out against anti-Muslim hate.”

Nawaz and his organization have been removed from the SPLC’s report and website, and the SPLC issued an apology to both Nawaz and Quilliam.

“Today, we entered into a settlement with and offered our sincerest apology to Mr. Maajid Nawaz and his organization, the Quilliam Foundation, for including them in our publication A Journalist’s Manual: Field Guide to Anti-Muslim Extremists,” Richard Cohen, the president of the SPLC, stated in an official apology to Nawaz following announcement of the settlement. “Although we may have our differences with some of the positions that Mr. Nawaz and Quilliam have taken, we recognize that they have made important contributions to efforts to promote pluralism and that they are most certainly not anti-Muslim extremists.”

The multi-million-dollar settlement marks the latest setback for the SPLC, easily one of the most subversive, dishonest, and tyrannical organizations operating in America today. Earlier this year, the SPLC was forced to issue an apology for publishing a blog post smearing a number of highly regarded progressive, anti-war journalists as white supremacists, fascists, and anti- Semites. The SPLC has a long history of defaming and slandering its political opponents, using its false credibility as a leading “civil rights watchdog” to discredit and marginalize its adversaries, as was the case with Nawaz.

“It’s appalling and offensive for the Southern Poverty Law Center to compare peaceful organizations which condemn violence and racism with violent and racist groups just because it disagrees with their views,” Jeremy Tedesco, senior counsel at Alliance Defending Freedom (ADF), stated in the wake of the settlement. “That’s what SPLC did in the case of Quilliam and its founder Maajid Nawaz, and that’s what it has done with ADF and numerous other organizations and individuals. This situation confirms once again what commentators across the political spectrum have been saying for decades: SPLC has become a far-left organization that brands its political opponents as ‘haters’ and ‘extremists’ and has lost all credibility as a civil rights watchdog.”

The SPLC’s dishonest and highly partisan tactics “have ruinous, real-world consequences for which they should not be excused,” Tedesco concluded. 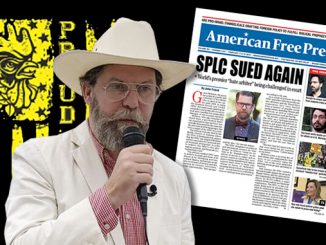