Professional hatemongering group has yet to release report promised in 2019.

In March 2019, the Southern Poverty Law Center (SPLC)—one of the most corrupt and biased non-profit organizations in the country masquerading as a benevolent, non-partisan charity and civil rights organization—fired its cofounder Morris Dees, a leading figure in the organization for decades.

At the time, Dees had been accused of a variety of offenses, including sexual harassment and racial discrimination, which he apparently let foster and spread within the SPLC. Additionally, the organization has a long track record of manufacturing “hate crime” statistics, hyping the threat of “racism” and “white supremacy,” and using its power and influence in the mass media and society more generally to target political opponents and advance its radical, left-wing agenda.

Following the accusations against Dees, who was the face of the SPLC for years, the entire organization was thrown into upheaval, with former employees exposing the operation as a scam and a con that exaggerated “hate” in order to solicit donations and maintain its status in the political and media sphere, where the organization and its spokespersons were often consulted as experts on a whole slew of topics. Others accused the organization of systematically promoting white staffers to the detriment of minorities, while others insisted sexual harassment and innuendo was commonplace throughout the organization, particularly at the highest levels.

SPLC leaders at the time vowed to investigate the allegations and review the internal dynamics within the organization to ensure it was living up to its avowed mission statement and purpose.

“As a civil rights organization, the SPLC is committed to ensuring that the conduct of our staff reflects the mission of the organization and the values we hope to instill in the world,” former SPLC President Richard Cohen stated following the announcement of Dees’s termination. “When one of our own fails to meet those standards, no matter his or her role in the organization, we take it seriously and must take appropriate action.”

Cohen went on to announce that an internal review conducted by an outside organization would be commissioned in order to provide “a comprehensive assessment of our internal climate and workplace practices, to ensure that our talented staff is working in the environment that they deserve—one in which all voices are heard and all staff members are respected.” Cohen resigned in disgrace shortly after making this announcement following criticisms that he failed to confront the problematic issues facing the organization, choosing instead to energetically cover them up.

Tina Tchen, Michelle Obama’s former chief of staff and a major figure in the #MeToo movement, which focuses on exposing sexual harassment against women, was eventually selected to lead the “comprehensive assessment” of the SPLC. Yet more than a year later, no review has been published or released.

Tyler O’Neil, a senior editor at PJ Media and author of the book Making Hate Pay: The Corruption of the Southern Poverty Law Center,* has covered the SPLC for years exposing its corruption and misdeeds in great detail. The SPLC refused to respond to O’Neil’s recent request for comment on Tchen’s internal review, casting doubt on the organization’s ability to hold itself accountable.

Following years of the SPLC’s exaggerating crime statistics, hyping and manufacturing “hate” and racial resentment, and targeting conservatives and right-wing political commentators, journalists, and organizations, the revelations brought forth by former employees should dispel the myth that the SPLC is a righteous, credible civil rights organization. It is and always has been a partisan, malicious hate group that smears and targets its political opponents, first and foremost. The fact that its internal review has still not been released should be the final nail in the coffin on this despicable organization. 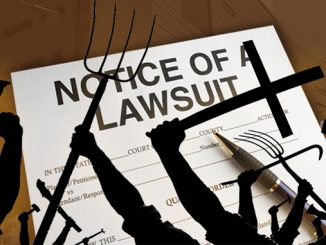