The 30-year president and longtime legal director of the Southern Policy Law Center have resigned following complaints of rampant sexism and racism within the organization, which led to the March 13th termination of cofounder and spokesman Morris Dees.

The infamous Southern Poverty Law Center (SPLC)—also known as “Hate Inc.,” is one of the most powerful radical left-wing activist organizations in America. Today, however, it finds itself in total chaos due to events that have transpired in recent weeks. Morris Dees, the SPLC’s infamous co-founder and leader for decades, was fired by the organization and several other high-profile executives have now resigned.

On March 13, the SPLC, which masquerades as a civil rights group, announced that it had fired Dees, as this newspaper recently reported. Few specific details have emerged regarding the subversive, anti-America organization’s decision to sack Dees. Top officials have said merely he was let go for “misconduct.” Ten days later, SPLC’s president, Richard Cohen, who was regularly consulted by various mainstream media outlets as an expert on “hate,” announced he was resigning.

“After more than 30 years at the Southern Poverty Law Center, I’ve decided to step down,” Cohen announced in a statement released on March 23. “Other legacy civil rights organizations have transitioned to a new generation of leaders, and I believe that we should, too.”

In his statement, Cohen announced that Tina Tchen, Michelle Obama’s former chief of staff, would be stepping in to lead a review of the organization’s policies and workplace environment. Tchen is a lawyer based in Chicago who focuses on gender and racial equality issues as well as sexual harassment in the workplace. The move was praised by Bryan Fair, the chairman of SPLC’s board and a law professor at the University of Alabama School of Law.

“The events of the last week have been an eye-opening reminder that the walk toward justice must sometimes start at your own front door and force you to look at your past so you can improve your future,” Fair said following Dees’s termination. “A key first step in that process for the SPLC is an immediate, top-to-bottom external review of our workplace culture and our past practices.”

Following the termination of Dees and the subsequent resignations of Cohen and Brownstein, employees at the SPLC have alleged that the organization is plagued by a “systemic culture of racism and sexism within its workplace,” according to an explosive report published by CNN which spoke with many employees on the condition of anonymity.

According to one source, a “pervasive racist” culture exists at the SPLC where women and blacks are not valued. A current employee told CNN that blacks are frequently passed over for promotions. “My boss only hires white people,” the employee stated to CNN.

The recent resignations have resulted largely from a workplace revolt taking place inside the organization, according to current employees.

“Employees asked the president to step down,” an unnamed SPLC employee explained to CNN. “He didn’t do anything to change the culture, and he left because of it.”

The explosive allegations and controversy currently surrounding the increasingly discredited left-wing activist group will surely linger on in the weeks and months ahead. However, given the organization’s massive multi-million-dollar endowment and seemingly unlimited resources, not only will the SPLC be able to continue promoting its radical leftwing agenda in America, but the fake news media will continue to promote the now-discredited organization as the “go-to expert” on racism and hatred as if it had not long inculcated a workplace environment rife with those very problems. 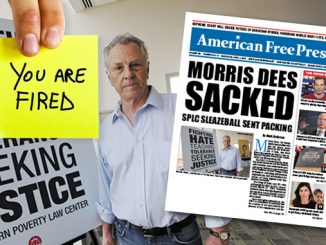 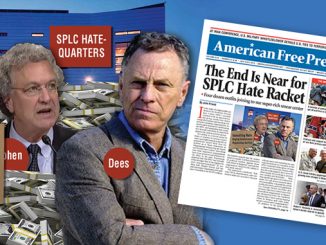 The End Is Near for SPLC Hate Racket