Bestselling writer exposes the “bullies” who rule schools, work places and society. Donald Jeffries, author of bestselling books like Hidden History: An Exposé of Modern Crimes, Conspiracies, and Cover-Ups in American Politics, Survival of the Richest, and Crimes and Cover-Ups in American Politics: 1776-1963, has turned his critical eye on yet another controversial topic.

In Bullyocracy: How the Social Hierarchy Enables Bullies to Rule Schools, Work Places, and Society at Large, bestselling author and political commentator Donald Jeffries offers a unique and helpful take on a subject more timely now than ever. Bullying has touched the lives of virtually every family in America. The author pored over countless tragic recollections from middle-aged men and women, still agonizing over, and forever scarred by their childhood experiences. Jeffries spoke to the parents of children who’d taken their own lives due to relentless bullying, which was ignored by indifferent teachers, principals, higher educational administrators, the mainstream media, and law enforcement. He discovered the disquieting fact that virtually all supposed “anti-bullying” activists and mental health “experts” actually defend the bullies, rather than the bullied.

Bullyocracy is filled with countless incomprehensible but true stories of even the youngest children being harassed and brutalized within our educational facilities. It’s difficult to pick the most heartbreaking tale. Was it the kindergartner who came home from school one day looking like she’d been through a prizefight, which school officials attributed to a “fall”? The young teen that killed herself, and her family watched in horror as the bullies responsible attended her funeral and laughed in their faces? The young girl knocked unconscious inside a classroom, with a teacher present? The teenager whose body was discovered rolled up inside a mat in the gymnasium, whose death was attributed to him falling inside while trying to retrieve a shoe?

While Jeffries found that officials at every school in the country (and most of the world) instinctively side with the bullies rather than their victims, in other ways schools are becoming virtual prisons. The author recounts the nonsensical drills in many school systems, which feature a mock shooter (almost always a politically correct angry homeschooler, gun “nut” etc.), and hired crisis actors to play the parts. These drills include blank shots and fake blood, none of which is disclosed beforehand to students (and sometimes teachers). Obviously, these are frightening, psychologically sadistic events, which have traumatized untold numbers of even very young grade school students.

In addition, Jeffries shows how the same school authorities that are oblivious to bullying in their direct presence, and fail to respond to parental concerns about it, are suspending kindergartners for hugging each other, or biting a pop tart into the shape of a gun or being caught taking an aspirin. In one case, a student with asthma had his inhaler confiscated, creating a potentially lethal situation. In another case, a kindergartner, who was dared by a bully to pull down his pants at recess, was charged with a sexual offense for doing so, while the bully went unpunished. As the author demonstrates with numerous examples, while even the most egregious physical bullying escapes the notice of teachers and other adults, even inside the classroom, the instant a victim fights back, every adult seems to notice and quickly responds. In such cases, the bullied child is always punished at least as severely, if not more so, than the bully.

Jeffries also shows how the troublesome police presence, a reality now in virtually all schools, has done nothing to quell the epidemic of bullying. As he notes, the bully personality is a characteristic of many police officers, so they may naturally sympathize with the bullies and not the bullied. The Orwellian security cameras that are also a reality on every school campus should seemingly capture bullying clearly, but officials have proven reluctant to even check the footage in many cases. While police officers stationed at schools have done nothing to stop the bullies, they have participated in the arrest of even very young children for ridiculous transgressions. Children have been arrested for burping, yawning too close to a teacher, or writing with a magic marker on a school desk (the graffiti was the opposite of obscene). They’ve even been tasered by officers in the hallways and cafeterias.

Jeffries concludes that the bullying problem revolves around the social hierarchy that exists in every school. As he notes, there can’t be popular students without unpopular ones. The author also provided some fascinating and startling research that shows a majority of the movers and shakers of adult society were jocks, cheerleaders, prom queens etc. in high school. He looks at how bullying pervades the workplace as well.

That’s right: Bullies go on to intimidate and harass others for the rest of their lives. Is there anything we can do to stop bullying? What strategies work to counter bullies? And what can we do to help those who are being bullied stop the abuse not only in school, but in the workplace and other venues?

In Bullyocracy, Jeffries exposes the truth about this important issue in a way no one ever has before. If you or your children or grandchildren are being bullied—or you have a friend dealing with this problem—Bullyocracy is must-reading.

Bullyocracy: How the Social Hierarchy Enables Bullies to Rule Schools, Work Places, and Society at Large is available from the AFP Online Store, as well as Jeffries’s other books. 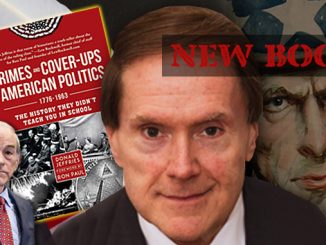