Donald Jeffries reveals “the history they didn’t teach you in school,” revealing the dark side of U.S. politics in his must-read new book.

The explosive new book Crimes and Cover-Ups in American Politics: 1776-1963—The History They Didn’t Teach You in School, which features a foreword from Ron Paul, tears the lid off two centuries’ worth of lies by the state-controlled court historians. In the words of the great George Orwell: “Who controls the past controls the future. Who controls the present controls the past.”

Few Americans realize how far-removed our present-day leaders are philosophically from the founding fathers and the system of government they carefully devised. Once-revered figures like Thomas Jefferson have been slandered and branded “racist” by virtue-signaling mainstream journalists and arrogant college professors.

In his new book, Crimes and Cover-Ups in American Politics: 1776-1963, AFP writer Donald Jeffries takes an in-depth look at numerous subjects spanning two centuries of U.S. history. These topics include, for instance, evidence showing DNA tests that allegedly established Thomas Jefferson fathered the children of his slave Sally Hemings were less than complete. In fact, they merely demonstrated that a male from the Jefferson family—with over 20 potential candidates—probably fathered one of Hemings’s children. While the author of the Declaration of Independence continues to be slurred as a “child molester” and “rapist,” the DNA tests actually proved that he could not have fathered the child who was born to Hemings when she was underage.

Jeffries also writes that Hollywood has never made a film, even in its early, patriotic days, about the life of George Washington. Or Benjamin Franklin. Or Thomas Jefferson. Or Patrick Henry. The only founding father who was given his own film was the bankers’ favorite, and the father of debt, Alexander Hamilton. While the other founders are dismissed now as “dead white men,” Hamilton has experienced a rebirth on Broadway as a hip, young black man. The entertainment industry does not want to focus on the circumstances surrounding the birth of this republic and all that radical talk about overthrowing tyranny, taxation without representation, and the right of people everywhere to have a government they consent to.

Readers will learn how the concept of consent of the governed was shattered forever by Abraham Lincoln during the War Between the States. Crimes and Cover-Ups exposes the dark side of Lincoln, revealing him to be a constitutional usurper, the first imperial president, and the greatest tyrant in the history of this country.

Lincoln locked up an unknown number of civilians in the North for their opposition to the war or to his suspension of the writ of habeas corpus. One of those imprisoned was Frank Key Howard, grandson of Francis Scott Key. In a fantastic historical irony, Howard was jailed in Fort McHenry, the same fort over which the majestic flag was flying when his grandfather described it in “The Star-Spangled Banner.” Lincoln also shut down more than 300 newspapers that dared to question his authority. He was even going to arrest the chief justice of the Supreme Court, who ruled that his suspension of the writ was unconstitutional, but his aides talked him out of it.

While Lincoln forever altered the balance of powers with his overreach, readers should come to understand that his assassination was the result of an “inside job,” orchestrated almost certainly by his mentally unstable secretary of war, Edwin Stanton. William T. Sherman, Philip Sheridan, Ulysses S. Grant, and other northern generals are exposed for what they were—bloodthirsty thugs who trampled upon the time-honored protocols of warfare. Under Lincoln, the “scorched earth” policy of Sherman and his cohorts resulted in the wholesale burning of houses and crops, destruction of land, organized plunder and theft, and unfettered rape of women, especially slave women. Readers will see Reconstruction for what it was—a military occupation of the South, with total subjugation of the remaining populace, which eventually resulted in the birth of the Ku Klux Klan, Jim Crow laws, and a century of “separate but equal” society.

Other topics Jeffries explores include:

Roosevelt, like Wilson, his cousin Teddy, high-profile lawyer Clarence Darrow, and other leading “liberals” of the era had all been passionately in support of World War I (unlike genuine classical liberals and populists like William Jennings Bryan, Huey Long, and Smedley Butler) and were lusting for World War II. This book presents voluminous evidence that FDR and other high-ranking government officials were desperate to get into the new European war and engineered the “sneak” attack by the Japanese at Pearl Harbor. And then there were the atrocities committed by the “good guy” Allies, including widespread reports of rape.

Crimes and Cover-Ups in American Politics: 1776-1963 reminds the reader, over and over again, that history is written by the victors. History is also, as Napoleon Bonaparte said, merely a fable that is agreed upon. The court historians have distorted the record so thoroughly that most of the “heroes” it touts were genuine “bad guys,” and those labeled as villains were often the “good guys.” Lifelong warmongers like Teddy Roosevelt, Woodrow Wilson, Franklin Roosevelt, and other leading “liberals” of each age are portrayed as voices for peace and reason. A good American like Henry Ford, meanwhile, who was a genuine pacifist, is denigrated as a cranky anti-Semite.

Most Americans have little interest in history, and a large number are historically illiterate. This book can help educate them.

The Birth of the Republic

The slandering of Jefferson, sacrifices of the Founders, Benjamin Franklin’s Hellfire Club association and later discovery of human bones in his London home, Thomas Paine, the Shays and Whiskey Rebellions, Adam Weishaupt and the Illuminati, our revolutionary legacy

Meriwether Lewis—murdered or suicide, the War of 1812, Freemasons and Anti-Masons, Andrew Jackson—foe of bankers and first president to experience an assassination attempt, Remember the Alamo, the Mexican-American War, John Brown’s true nature

For far too long, American history has been left in the unreliable hands of those that author Donald Jeffries refers to as the court historians. Crimes and Cover-ups in American Politics: 1776-1963 fights back by scrutinizing the accepted history of everything from the American War of Independence to the establishment reputation of Thomas Jefferson and the other Founding Fathers, the Civil War, the Lincoln assassination, both World Wars, U.S. government experimentation on prisoners, mental patients, innocent children and whole populated areas, the Lindbergh baby kidnapping and much, much more. Secular saints like Abraham Lincoln, Theodore Roosevelt, and Franklin D. Roosevelt are examined in a critical way they seldom have been. This is a book all AFP supporters should read! 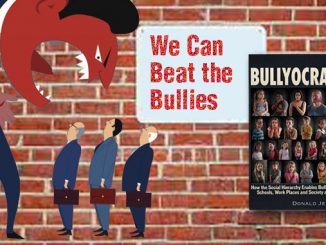 Author Fights Back Against the Bullies