Ben “Cooter” Jones spoke with AFP about Southern heritage and his work as a civil rights advocate, and his time at University of North Carolina Chapel Hill, where his dorm room overlooked the statue of the noble young Confederate soldier setting off to war, “Silent Sam.”

As the host of TBR Radio’s “The Dixie Heritage Hour,” it has been my privilege on multiple occasions to interview former Georgia Rep. Ben Jones (D). Many of you remember him as “Cooter,” the lovable tow-truck driver on the television show “The Dukes of Hazzard.”

As a young man, 100 years after the beginning of the War Between the States, in 1961, Jones left his job at a factory in Wilmington, N.C. to hitchhike his way to Chapel Hill where he enrolled in the University of North Carolina (UNC).

He was assigned a bed in the “Battle Dormitory, which faced Franklin Street, Chapel Hill’s ‘main drag.’ My room, 8 Battle, looked out over McCorkle Place, the ‘upper quad’ of the campus.”

“It was from there, over the next two years,” Jones said, “that I watched the changing of the seasons on the campus grounds, the blazing autumn hardwoods, and those seductive dogwood and magnolia spring-times, not to mention the passing co-eds.”

Continuing to reminisce, he said, “I was told that Thomas Wolfe, the author of Look Homeward, Angel had lived in that room and looked out that same window back in 1916. I could not believe my good fortune in having landed in this ‘Southern Part of Heaven.’ Like Wolfe, I was overflowing with ideas and dreams and confusion. And, like him, I chased the elusive girls of the night and drank the last drop that was to be had.”

But most notably, he said, “The one constant outside that window, in every season, was the noble statue of ‘Silent Sam,’ the Confederate soldier who stood vigilant watch over the campus.”

On the night of Aug. 20, radical far-left activists toppled the statue of Silent Sam. As AFP goes to press, the statue has not been replaced, but university administrators say he will be put back.

“Sam,” Jones said, “represented those young students who had left the campus when ‘the War’ came, those noble students who went off to do their duty. It was said that UNC gave more students to the Southern Cause than any other school.”

A few weeks into Jones’s career, President John F. Kennedy visited the campus where he gave a speech on Founders Day. Jones remembers the president. “In his first year in office, JFK was in full form, at his handsome, youthful, and charismatic best.”

Commemorating the school’s Confederate past, Jones recalls, “this liberal Democrat from Massachusetts” said:

There is, of course, no place in America where reason and firmness are more clearly pointed out than here in North Carolina. All Americans can profit from what happened in this state a century ago. It was this state, firmly fixed in the traditions of the South, which sought a way of reason in a troubled and dangerous world. Yet when the war came, North Carolina provided a fourth of all of the Confederate soldiers who made the supreme sacrifice in those years. And it won the right to the slogan, “First at Bethel, farthest to the front at Gettysburg and Chickamauga, last at Appomattox.”

Jones said that the president’s words that day “had a profound effect upon me.” And he would remember them again, a little over two years later, when Kennedy was assassinated in Dallas.

“He had asked us, that day he spoke at Chapel Hill, ‘Are you going to be a hammer or an anvil?’ Within days, I was marching and demonstrating in the civil rights movement. It was my way of dealing with his death.”

As a civil rights activist, Jones would ultimately be recruited by Dr. Martin Luther King. He would also be “sucker punched, shot at, threatened,” and he would even spend “more than a few nights in jail.”

It was during his time as a civil rights activist that Jones, “began to realize that my Southernness was more than just a birthright. I came to believe that it was an honor bestowed upon me by my Maker. I still feel that way.”

King and other leaders in “the movement,” a movement of Southerners,” also agreed with him.

Asking him what King thought about monuments, like Silent Sam, now being destroyed by protestors in his name, Jones said: “Dr. King never contemplated the destruction of historic monuments or the removal of historic symbols and flags. He was a Southerner, who shared our past. His entire thrust was for Southern whites and blacks to ‘dine together at the table of brotherhood.’ He understood that our common history would be the essential foundation for our common future.”

When asked what he thought about the current situation at his alma mater, he said:

Fifty-plus years ago I would look out at Silent Sam from my window in Battle Dorm and try to imagine what it must have been like to have gone off to war in those days. I thought of Sam as maybe a youth from somewhere like Tarboro or Clinton or Hickory. He was of good heart, I figured, maybe 18 or 19, a bit thin, a bit afraid. He was of that tough North Carolina stock, that “salt of the Earth” fellow whose character is reflected in the state’s motto, Esse Quam Videri —‘To be, rather than to seem.”

The radical trash who tore down Silent Sam and those academic idiots who enable them are not worthy to walk on the same ground as Gabriel Jacobs. Silent Sam will rise again, and we, not they, shall overcome.

As the former congressman was uttering his prophesy, Thom Goolsby of the university’s board of governors was announcing at a press conference: “Silent Sam will be reinstalled, as required by state law, on the campus within 90 days. The criminals who destroyed state property at UNC and the police who did nothing will be held accountable. The university will not allow anarchy to reign on our campuses.”

A pastor and in-demand traveling speaker, Dr. Edward DeVries is the editor of the Dixie Heritage Newsletter and a contributing editor at THE BARNES REVIEW. He is the author of 30 books including the two-volume Glory in Grey. Some of his other titles include Sacred Honor, The Truth About the Confederate Battle Flag, Prayer is Simple, Every Member a Minister and Coaching Youth Baseball the Right Way. He is also the host of TBR RADIO’S “Dixie Heritage Hour.” Please check it out at BarnesReview.org. 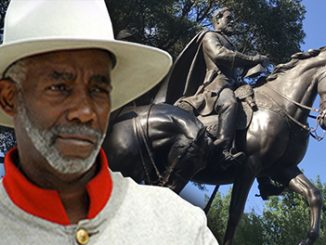