Retired Lieutenant Colonel Karen Kwiatkowski reflects on the events of 9/11 and Israeli influence on D.C.

Retired U.S. Air Force (USAF) Lt. Col. and Pentagon whistleblower Karen Kwiatkowski, who exposed a “neoconservative coup” and a “hijacking of the Pentagon” by neocons serving Israel’s interest, sat down with this reporter to reflect on the false-flag terror attacks that changed the course of this country, clearly for the worse.

Kwiatkowski, who retired in 2003 after a distinguished military career, was at one time assigned to the National Security Agency (NSA), eventually becoming a speechwriter for the agency’s director. Upon leaving the NSA, she served as an analyst in the Pentagon’s Near East and South Asia directorate, and doesn’t for a minute subscribe to the U.S. government’s 9/11 conspiracy theory.

“I believe the commission failed to deeply examine the topic at hand, failed to apply scientific rigor to its assessment of events leading up to and including 9/11, failed to produce a believable and unbiased summary of what happened, failed to fully examine why it happened, and even failed to include a set of unanswered questions for future research,” she said. “It is as a scientist that I have the most trouble with the official government conspiracy theory, mainly because it does not satisfy the rules of probability or physics. The collapses of the World Trade Center buildings clearly violate the laws of probability and physics.”

She was at work that day in the world’s largest office building.

“I was at the Pentagon,” she said. “I was not in the part that was immediately impacted, but I feel like, since I was there on that day, and since I was in the Air Force . . . where was the normal Air Force response in the face of hijacked airplanes?”

Kwiatkowski referenced the Oct. 25, 1999 crash of a Learjet carrying professional golfer Payne Stewart and five others that was set to fly from Orlando, Fla., to Dallas, Texas. After losing cabin pressure and incapacitating all aboard due to lack of oxygen, the jet failed to turn toward Dallas and continued on for nearly four hours and 1,500 miles, before running out of fuel over South Dakota and crashing into a field. Unlike any of the hijacked jets on 9/11, this one was intercepted several times.

On the first interception, a USAF F-16 Fighting Falcon test pilot from Eglin Air Force Base was ordered to intercept. The pilot made several unsuccessful attempts to communicate with Stewart’s jet and completed a thorough visual investigation before breaking formation and proceeding to an Illinois Air Force base. The second interception consisted of two Falcons from the Oklahoma Air National Guard (ANG) who were ordered to intercept before breaking off to rendezvous with a tanker for refueling. The third interception and escort saw two more Falcons from the North Dakota ANG ordered to intercept before being forced to break off their pursuit to land at local airports. The Lear jet ran out of fuel and descended, resulting in a ground impact at nearly supersonic speed, which left a crater 42 feet long by 21 feet wide by eight feet deep.

“That’s the normal kind of response in a domestic air incident like that,” Kwiatkowski explained, “and, of course, we didn’t have anything like that on 9/11.”

Kwiatkowski recounted the faulty intelligence she witnessed being cooked up by the Pentagon’s now-defunct Office of Special Plans for an invasion after 9/11.

“What they were doing was ginning up the war against, they hoped, Iran and Iraq at the same time,” said Kwiatkowski. “Iraq was the one that they really planned to invade and wanted to, but there was no justification for it. What they were doing was to sell a war that nobody wanted, that nobody needed, that really wasn’t justified by any national security means, and the way they did it was disinformation and taking over the intelligence.

They created their own intelligence. They funneled it into the arteries of the intelligence system. And, of course, leaking it to the newspapers and the media, ultimately to propagandize the whole American public. So, they wanted a war and they got one.”

These neocons who hijacked U.S. foreign policy “believed in a muscular foreign policy, in particular one that would do the work, I think, of Israel, certainly in the Middle East,” she continued.

“Take the hits for Israel, help work with Israel as if Israel was joined at the hip with the United States, in terms of policy, which it is not. We got to watch the formation of this organization and its handpicked people, political appointees, people with no military background to speak of, but plenty of agenda.

“And you put that together with the right rank and the right access to the mainstream media in this country,” she explained, and, voila, you have a war. The war designers are the worst kind of traitors.

“There are a lot of people very comfortable with saying whatever they have to say to get what they want,” said Kwiatkowski. “Well, in government when they lie, people die.”

This reporter asked if the United States is Zionist occupied territory.

“I think that’s fair to say about Washington, D.C.,” she answered. “The Congress certainly is. Our congressmen, they don’t really owe allegiance, for the most part, to the people that voted for them.” 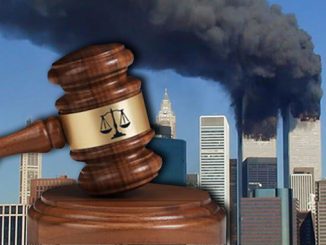 3 Comments on Pentagon Whistleblower Won’t Back Down