A group of 27 scholars have united in writing “Memoranda to the President” to demand Trump expose the truth of 9/11 this year. Will he respond? This compilation of writings is now available from the AFP Online Store (details below).

“God Bless America and God Bless Donald Trump.” So begins a collection of memos to President Donald Trump by 27 experts on the attacks of Sept. 11, 2001.

The presidential briefing on 9/11 was organized by Robert David Steele, a former CIA Clandestine Services Officer and founder of the Open Source Intelligence movement. Contributors include David Ray Griffin, widely considered the unofficial dean of 9/11 studies, Peter Dale Scott, the University of California-Berkeley professor emeritus who popularized the term “deep state,” Richard Gage of Architects and Engineers for 9/11 Truth, and two dozen others including yours truly.

Steele knows people close to Trump and believes the president will “get the memo.” In a recent radio interview, Steele said:

Though the mainstream fake news media constantly attacks Trump’s “conspiracy theories,” it never mentions the president’s most explosive campaign promise: Elect Trump and “you will find out who really knocked down the World Trade Center.” Donald Trump made that promise on Feb. 15, 2006 to a cheering crowd in Bluffton, S.C. Why isn’t the media holding Trump’s feet to the fire on this astounding promise—if only to further demonize him? Perhaps because the people who control the media are terrified that Trump might actually act on it? Or perhaps because they know how obvious it is that the World Trade Center was blown to kingdom come with high explosives, so they don’t want to draw attention to the issue?

The media’s treasonous participation in the 9/11 cover-up underlines the truth of Trump’s charge that mainstream newspapers and TV channels are purveyors of fake news. The MSM’s false and libelous claim that radical Muslims were responsible for 9/11, when, in fact, the deed was done by Israeli agents and their treasonous American accomplices, is the biggest fake news story ever concocted.

The fake news 9/11 official story is a racist lie. It directly triggered the murder of 32 million Muslims worldwide, according to avoidable mortality expert Gideon Polya. The racist assault on the Muslim world, whose major beneficiary is Israel, has created a flood of tens of millions of refugees that has overwhelmed Turkey, Pakistan, and various European nations. Yet the murderous, racist, genocidal 9/11-lie-purveying MSM says its truthseeking critics are the racists. It should cast out the beam in its own eye before worrying about the mote in the other side’s.

Trump could use 9/11 truth as a “nuclear option” to blow up the entire deep state and its lapdog media. But he would need the support of a dedicated core of patriots in the military and law enforcement communities. Whether that patriotic core has reached critical mass yet is an open question.

The contributors to Steele’s Memorandums for the President on 9/11 certainly hope that it has. Among them are ex-insider whistleblowers Tom-Scott Gordon, Susan Lindauer, and Scott Bennett.

Gordon was part of a team that documented the need to demolish the World Trade Center by 2007 at the latest, due to structural flaws, corrosion, and asbestos. Conventional, legal demolition would have been prohibitively expensive. 9/11 provided “urban renewal by other means.”

Ms. Lindauer was a CIA asset reporting to Case Officer Richard Fuisz. Both knew about 9/11 in advance but weren’t given full details. On Sept. 11, 2001, Ms. Lindauer was on the phone with Fuisz. According to Lindauer, as they both watched the explosive demolitions of the towers on television, Fuisz flew into a rage, screaming “the goddamn Israelis!”

These and other 9/11 whistleblowers could help Trump finish off the deep state. Mr. President, are you listening? 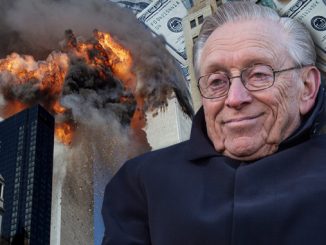 9 Comments on President Gets 9/11 Memo, But Will He Respond to It?