Less than a week after the first anniversary of 9/11, George W. Bush delivered this immortal though somewhat bungled line from a podium in Nashville: “There’s an old saying in Tennessee—I know it’s in Texas, probably in Tennessee—that says, fool me once, shame on . . . shame on you. Fool me [twice]. . . . You can’t get fooled again!”

One group that won’t get fooled again is the office workers in the Twin Towers who, on 9/11, felt jolts from a series of explosions, the second of which was apparently a large plane impact. The public address system immediately kicked into action, telling them on an endless loop: “Remain where you are. Do not attempt to leave the building.” Those who listened and obeyed were soon blown to smithereens in explosive controlled demolitions. Those who ignored the voice of authority, followed their common sense, and got the hell out of there as fast as they could, survived.*

Today, the voice of authority is telling us to rush out and get Covid vaccines that were admittedly developed at “warp speed.” Two groups that were famously victimized on 9/11—first responders and firefighters—are saying, “No, thanks.”

Covid first responders (doctors, nurses, and other medical professionals) are, for obvious reasons, being targeted for early vaccine administration. Shockingly, the majority don’t want the vaccine! A study by the University of California Los Angeles’s Karin Fielding School of Public Health found that 66.5% of healthcare workers say they won’t get the vaccine when it becomes available. Instead, they will wait, do their own research, and come to their own conclusions about when and whether it is proven safe.

Firefighters, too, are skeptical. According to ABC News, “The Uniformed Firefighters Association (UFA) survey of 2,000 members of the New York City Fire Department (FDNY) showed that 55% of participants said they would not bother to get inoculated.” The firefighters’ unions are gearing up to defend their members’ rights to refuse inoculation.

But wait! The vaccine manufacturers, the federal government, the WHO, and other authority figures all insist the vaccines will be safe and effective. Why won’t the firefighters just believe what they’re told and line up for the jab?

Maybe the NYC firefighters learned something from 9/11. More than 343 of them died that day because Rudy Giuliani and his nameless advisors—who admittedly knew in advance that the towers were coming down—did not pass that foreknowledge on to the firefighters.

This is not an unsubstantiated “conspiracy theory.” It is documented fact. In an ABC-7 News interview conducted around 1:00 p.m. on Sept. 11, 2001, Giuliani said: “I went down to the scene and we set up headquarters at 75 Barkley Street, which was right there with the police commissioner, the fire commissioner, the head of Emergency Management. And we were operating out of there when we were told that the World Trade Center was going to collapse.”

No steel-framed high-rise building has ever completely collapsed for any reason other than controlled demolition. The Twin Towers, which exploded symmetrically into pyroclastic dust clouds at roughly free fall acceleration, completely disappearing from the face of the Earth in around 10 seconds, were no exception . . . unless you want to argue that they didn’t “collapse,” they exploded.

Donald Trump, in an interview also conducted in the afternoon of 9/11/2001, pointed out that bombs must have been used to destroy the buildings. According to a study by Canadian professor Graeme MacQueen, that was also the opinion of the vast majority of journalists who were on-site in New York City that day. And 118 firefighters also testified about the massive explosions they witnessed on 9/11.

It wasn’t just three high-rise buildings that were demolished on 9/11. It was also public trust. Terror Czar Richard Clarke famously said of 9/11: “Your government failed you.” But the truth is even worse: Your government killed you.

Unless and until the 9/11-anthrax coup is officially exposed, and the criminals behind it prosecuted and punished, no sane American will trust a single word they hear from anyone in any position of authority. Not just government officials, but also the scientific community, which takes its cue from government-funded propagandists like Shyam Sunder of the National Institute of Standards and Technology, and Dr. Anthony Fauci or the National Institutes of Health, has lost all credibility. So, too, have the mainstream media presstitutes who uncritically report on “authoritative” lies and, increasingly, work overtime to censor the truth.

To defeat the Covid emergency, we must first address the truth emergency.

* I am not implying that all deaths in the Towers were caused by the “remain in place” announcements. Many were killed in pre-demolition explosions, while those above the plane strike level in the South Tower could not get out even if they wanted to. But the announcements undoubtedly did substantially raise the death toll.

Kevin Barrett, Ph.D., is an Arabist-Islamologist scholar and one of America’s best-known critics of the War on Terror. From 1991 through 2006, Dr. Barrett taught at colleges and universities in San Francisco, Paris, and Wisconsin. In 2006, however, he was attacked by GOP state legislators who called for him to be fired from his job at the University of Wisconsin-Madison due to his political opinions. 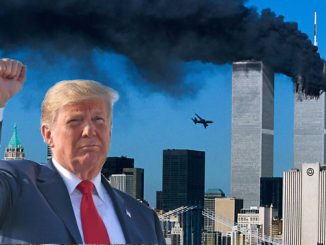