Even now, nearly 16 years after 9/11, discussion of certain aspects of the crime remain taboo in most of the world. One such hot topic is what role Israel, or specifically Mossad, may have played. Now, a Jewish-American academic has reaffirmed Israel’s ties to Sept. 11, much to the chagrin of the global Israeli lobby.

An American academic recently revealed some key yet little-known truths about the 9/11 terrorist attacks, sparking outrage and condemnation from pro-Israel groups.

Joel Kovel is a Jewish-American professor emeritus and the author of Overcoming Zionism, a book critical of Zionism that advocates the creation of a secular, non-discriminatory democracy in Israel. He recently joined a long list of other notable scholars and researchers who have exposed and highlighted the fact that Israeli Mossad agents were arrested on Sept. 11, 2001, after they were seen celebrating the attacks on the Twin Towers in New York City earlier that fateful morning.

Kovel made the remarks during the question-and-answer session of a controversial conference that recently wrapped up in Cork, Ireland. The three-day conference, entitled “International Law and the State of Israel: Legitimacy, Exceptionalism, and Responsibility,” took place the last weekend in March and was held at both Cork City Hall and University College Cork.

The conference featured academics from a variety of disciplines and from around the world. They gathered to “engage questions concerning the manner of Israel’s foundation and its nature, including ongoing forced displacements of Palestinians and associated injustices,” according to the conference’s description of the event.

“There are so many facts that aren’t known, and then they’re lost to memory,” Kovel stated during the question-and-answer session that followed the panel presentation. “Did you know that, as the towers were burning on 9/11 in lower Manhattan, about five painters were cheering on the process from across the river? . . . They were Mossad agents. And they were arrested and disappeared from the face of the Earth.”

Kovel was, of course, referring to the infamous “dancing Israelis,” who were arrested and detained by New Jersey police officers on the morning of Sept. 11. Sergeant Scott DeCarlo, one of the arresting officers, spoke with American Free Press in September 2011 about his experience in an exclusive interview that revealed important details of the arrest. 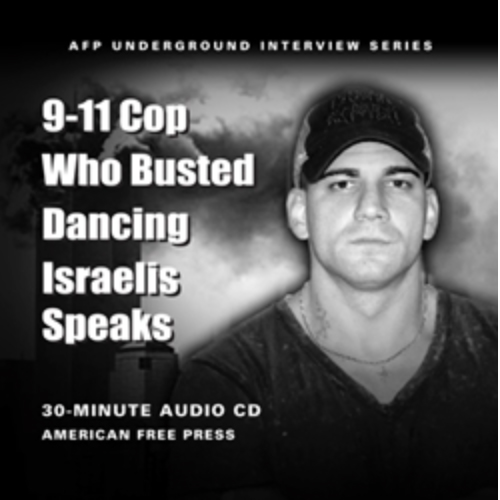 On the morning of 9/11, New Jersey police received a BOLO—a “be on the lookout” alert—from headquarters “for a particular van, perhaps loaded with explosives,” DeCarlo told AFP at the time. It was feared that the van was on its way to destroy the George Washington Bridge, which connects New Jersey and Manhattan over the Hudson River.

DeCarlo soon encountered the van in question, and confronted the occupants. The Israelis driving the van, who were later discovered to be connected to Urban Moving Systems, a known Mossad front organization, initially refused to exit the vehicle or cooperate with the officers.

“We asked them to get out of the van, but they didn’t listen,” DeCarlo explained. “So, we put them in handcuffs and did it as quickly as possible.”

After the Israelis were detained, they immediately began attempting to convince the arresting officers that they were friendly and were allies of the United States. DeCarlo and his fellow arresting officers took the suspicious Israelis to holding cells in Meadowlands Stadium, where the FBI took charge of the investigation and detention process.

The five Israelis arrested by DeCarlo were held for roughly 10 weeks, questioned by the FBI, and quietly released to Israel on minor immigration charges. They later appeared on an Israeli talk show to discuss their experience and admitted they were in New York “to document the event,” referring to the 9/11 terrorist attack.

The notorious “dancing Israelis” Kovel referred to during the conference represent a minor fraction of the over 100 other Israelis arrested on and shortly after 9/11 with ties to the day’s events. A massive Israeli espionage operation was unraveled and exposed at the time, which was reported on by Fox News only to later be censored at the behest of the Anti-Defamation League.

Unsurprisingly, pro-Israel activists condemned the conference and especially Kovel’s statements, describing them as “deplorable,” and urged the organizations and corporations who financially sponsored the event to immediately pull their funding.