Many activists realize stone and marble are not the worst problems facing blacks, no matter what Black Lives Matter and antifa would have you believe.

Following the government- and mainstream media-instigated violence in Charlottesville, Va. last month, various municipalities across this nation are taking and considering taking preemptive steps to remove Confederate monuments from public land, so as not to invoke the wrath of the ascendant terrorist groups Black Lives Matter and the more loosely organized antifa.

In the halcyon days of these United States, if mask-wearing thugs arrived in any town or city intent on waging war in that community, they were met with the iron fist of law and order. No more.

On Aug. 14, Philip Kingston, who serves on the Dallas city council, took aim at a Robert E. Lee statue and other monuments in the city. Kingston believes “monuments to the Confederacy should not be on public land,” as reported in an article by the local CBS fake-news outlet. So biased and hateful have the fake-news media become that the caption under the photo of the Lee statue reads:

“The Confederate War Memorial in Dallas, Texas is a monument that attempts to glorify the treasonous acts of those who fought to defend slavery on the Confederate side of the American Civil War.”

Kingston’s resolution requires action by Sept. 13, when, if passed, a citizen-based task force will be created to decide the fate of the monuments. Interestingly, the Southern heritage-destroying councilman made news in July when the city’s chief financial officer sent a memo to Kingston demanding he return $8,160 of his $60,000 salary because he missed too many council meetings. “I was just busy,” Kingston said, as reported by The Dallas Morning News.

Some Dallas residents are busy as well, but for a different reason. A predominantly black group led by former city councilwoman Sandra Crenshaw is calling for Dallas’s Confederate monuments to remain standing, since removing them will not help alleviate media-alleged “racism.”

“I’m not intimidated by Robert E. Lee’s statue,” Ms. Crenshaw told the aforementioned newspaper. “It doesn’t scare me. We don’t want America to think that all African-Americans are supportive of this. Some people think that by taking a statue down, that’s going to erase racism. Misguided.”

Naturally, Kingston struck back. “What we don’t do is leave up a monument that celebrates the very idea that some of us are not equal to the others,” he said. “These monuments distort history; they don’t teach history.” On cue, Democratic mayor, former Pizza Hut CEO, and ad agency head Mike Rawlings chimed in by stating that the “white supremacists” in Charlottesville were “pure evil.”

American Free Press asked 69-year-old black Confederate supporter H.K. Edgerton for his views on the happenings in Dallas and across the country.

“I applaud the fact that they’re coming together to oppose the removal of statues,” he began. “However, I don’t like the tone of this message. Instead of saying ‘not intimidated by Robert E. Lee,’ she should’ve been very proud of Gen. Robert E. Lee, probably one of the most admired and respected men of his time and this time.”

Edgerton commented on the culture destroyers:

“What we have now is a continuation of what these folks did after the war when they sent these Northern school teachers to the Southland of America,” he said, “trying to divide and separate black folks and white folks. “The biggest problem I have is not with black folks, it’s with white folk guilt,” he said. “Most of the Black Lives Matter folks I see are young white folks. I’ve been all across this country and I’ll tell you right now most black folks don’t like being used as a weapon of choice to [enable] this destruction of our heritage and our history, [by] tearing down these monuments. This looks like Reconstruction all over again.” 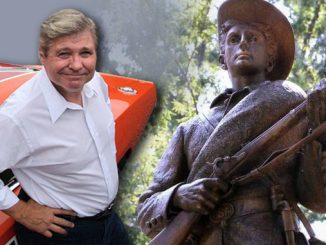