President Donald Trump has long railed against what he describes as unfair trade deals and high tariffs imposed on U.S. businesses and manufacturers, denouncing many of the key pillars of the post-WWII global economic order and vowing to end these deals, which have harmed American workers and companies for decades now.

During the 2016 presidential campaign and following his election as president, Trump has repeatedly promised, much to the chagrin of leading globalists both in the U.S. and abroad, to impose tariffs on goods from other countries that impose high tariffs on U.S. goods and services as well as to enact other protectionist trade policies in an effort to boost American business and manufacturing.

Since the beginning of this year, Trump has imposed a number of tariffs on goods coming from long-time U.S. trade partners and allies, including Mexico, the European Union (EU), and Canada, particularly on steel and aluminum imports originating in these countries.

At the recently concluded G7 Summit, held in Quebec June 8-9, Trump described the high tariffs that target American manufacturers as “ridiculous and unacceptable,” and described the U.S. as “a piggy bank that everybody is robbing.”

“Why should I, as president of the United States, allow countries to continue to make massive trade surpluses, as they have for decades, while our farmers, workers & taxpayers have such a big and unfair price to pay? Not fair to the people of America!” Trump tweeted. “Sorry, we cannot let our friends or enemies take advantage of us on trade anymore. We must put the American worker first!” read yet another tweet, hinting at moves the president plans on making in order to rectify the unfair trade deals the U.S. has suffered under for so long.

Trump and his top advisers have argued recently that now is the time to take drastic action on these unfair trade deals, and they are expecting cooperation from traditional allies and longtime trading partners such as Canada, Mexico, and the EU.

“The global trading system needs major surgery and every country must be part of the solution, even our friends,” Daniel DiMicco, a former trade adviser to Trump’s campaign and current chairman of the Coalition for a Prosperous America trade group, explained to The New York Times recently.

Once again taking to Twitter to express his sentiments on the controversy, Trump explained simply: “The United States will not allow other countries to impose massive tariffs and trade barriers on its farmers, workers and companies while sending their products into our country tax-free. We have put up with trade abuse for many decades—and that is long enough.”

How much cooperation he will receive from other countries, including long-time allies and trading partners, remains to be seen. The president, however, appears more defiant than ever on this issue and has made it a central premise of his agenda.

Virtually the entire mainstream corporate media and political establishment have lambasted Trump and his criticisms of the various free trade deals that comprise the post-WWII global economic order, viewing free trade as sacrosanct and necessary for a prosperous economic powerhouse such as the United States. Sen. John Mc-Cain (R-Ariz.), a leading globalist and neoconservative warmonger, recently argued that “bipartisan majorities of Americans remain pro-free trade, pro-globalization, and supportive of alliances based on 70 years of shared values,” a false and unchallenged narrative that has been endlessly promoted and parroted by the political and media establishment for decades. And what have the results of this been? Millions of good jobs have left the United States, and the wealthiest 1% of the world have increased their net worth while hardworking middle-class Americans continue to struggle.

Trump and his top advisers disagree and have pledged to finally put American workers and manufacturers first by renegotiating trade deals to protect American businesses and industry. 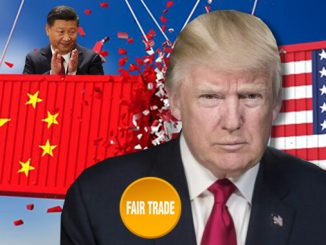 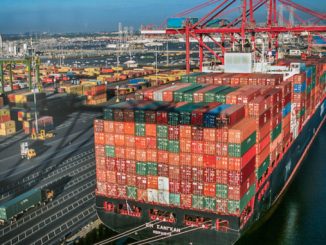 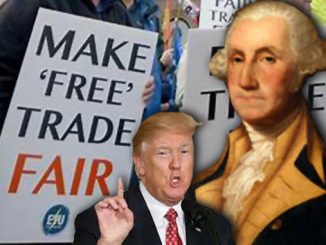 Globalists & Nationalists: Who Owns the Future?

2 Comments on Tariffs Are Actually Good for U.S. Economy