Pat Buchanan says the question of 2018 is whether or not we should abolish ICE and open our borders. Seriously, is this really the point we’ve reached led by the screachings of an unhinged left?

“No Borders! No Nations! No Deportations!” “Abolish ICE!”

Before last week, these were the mindless slogans of an infantile left, seen on signs at rallies to abolish ICE, the agency that arrests and deports criminal aliens who have no right to be in our country.

By last week, however, “Abolish ICE!” was no longer the exclusive slogan of the unhinged left. National Democrats were signing on.

After Crowley’s rout by a 28-year-old socialist who called for killing the agency, Sen. Kirsten Gillibrand (D-N.Y.), declared ICE to be “a cruel deportation force (that) we need to abolish.”

Cynthia Nixon, a candidate for governor of New York, described ICE as a “terrorist organization . . . terrorizing people who are coming to this country. . . . We need to abolish ICE.”

A star of “Sex and the City” castigated the men and women of ICE as terrorists at St. Paul and St. Andrew United Methodist Church in Manhattan. One wonders what the pastor thought of this Christian message.

“President Trump seems to think that the only way to have immigration rule is to rip parents from their family (and) treat rape victims and refugees like terrorists and to put children in cages.”

What ICE does is “ugly” and “wrong,” said Warren.

“We need to rebuild our immigration system from top to bottom starting by replacing ICE with something that reflects our morality.”

President Donald Trump describes this latest liberal campaign as social and political insanity: “You get rid of ICE you’re going to have a country that you’re going to be afraid to walk out of your house.”

What is going on here?

Democrats, having just gone through the worst week in memory for progressives, are in imminent danger of losing it altogether.

Last week, the Supreme Court ruled that not only is the Trump travel ban constitutional, government unions have no right to extract “agency fees” from workers who do not wish to support the union.

Such fees violate the First Amendment rights of government workers not to promote policies or ideas in which they disbelieve.

Then came word that Justice Anthony Kennedy, the “swing vote” on the Supreme Court who was crucial to the decisions that established abortion, homosexuality, and same-sex marriage as constitutional rights, will be stepping down

And Trump informed the press that he would announce Kennedy’s successor on July 9, to be drawn from a list of 20 jurists and legal scholars, all of whom have been vetted by the Federalist Society.

“I’m scared. You’re scared. We’re all scared,” says Warren in a video her campaign has released.

On Bill Maher’s show, leftist film director Michael Moore called for a million citizens to surround the Capitol to prevent a vote on Kennedy’s successor. How Moore’s million-man march proposes to get into Mitch McConnell’s Senate chamber was left unexplained.

At a fundraiser in Berkeley, California, Barack Obama tried to calm his terrified minions: “All these people that are out here kvetching and wringing their hands and stressed and anxious and constantly watching cable tv and howling at the moon, ‘What are we going to do?’ Their hair is falling out.”

But liberal elites making fools of themselves is a less serious matter than the savage slanders Democrats are hurling at the 20,000 men and women of ICE who are daily protecting us and our country.

ICE, after all, was established to prevent another 9/11, when [allegedly] real terrorists, some of whom had overstayed their visas, massacred 3,000 innocent people, most of them Americans.

This vilification of ICE, writes Deputy Director Thomas D. Homan, represents both an injustice and an act of ingratitude:

“Since September 2016, ICE has arrested nearly 5,000 criminal aliens in New York—individuals with a criminal conviction in addition to their violation of immigrant laws. Many of these arrests were conducted at large in the community, which ICE is increasingly forced to do due to sanctuary policies in the state that prevent us from taking custody of criminal aliens in the secure confines of a jail.

“Governor (Andrew Cuomo) supports these policies at the expense of the safety of the very same communities he took an oath to protect.”

Whatever one may think of Trump’s policy of “zero tolerance” of immigrants who break into our country, for elites to smear the 20,000 men and women who risk their lives to keep us safe, as “terrorists” and “fascists,” is an especially egregious form of liberal ingratitude.

What is it in the DNA of the left that it is always ready to enlist in any new war on cops?

The issue of 2018: Should we, or should we not, abolish ICE and embrace the progressive alternative of open borders? 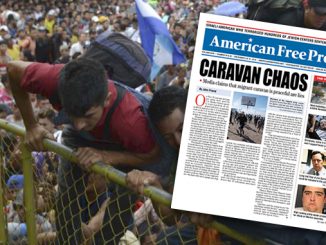 Caught on Camera: ‘Lie for Asylum’