If the government won’t build the wall, Americans will do it themselves!

As President Donald Trump continues to fail to fulfill one of his key campaign promises to build a wall along the southern U.S. border to protect America against the ongoing invasion of Third World migrants, private U.S. citizens are taking the initiative themselves.

Brian Kolfage, a combat veteran who served two tours in Iraq with the Air Force, helped establish We Build the Wall, Inc. along with former Trump adviser Steve Bannon. The non-profit organization set up a GoFundMe page late last year in an effort to raise funds from private U.S. citizens to help finance construction of a border wall along key sectors of the porous U.S.-Mexico border, where illegal immigrants from a variety of countries continue to pour through. Kolfage is a triple-amputee veteran who received the Purple Heart award for his service in Iraq. He, like many Americans who voted for Trump, is determined to see a border wall built to help protect the U.S. border and hinder illegal immigration.

“As a veteran who has given so much, three limbs, I feel deeply invested to this nation to ensure future generations have everything we have today,” Kolfage stated on the GoFundMe page for We Build the Wall, Inc., which as AFP goes to press has generated over $23.8 million in donations since it was established.

“Too many Americans have been murdered by illegal aliens and too many illegals are taking advantage of the United States taxpayers with no means of ever contributing to our society. I have grandparents who immigrated to America legally; they did it the correct way, and it’s time we uphold our laws, and get this wall built.”

Donations large and small began rolling in almost immediately, and picked up big-time over Memorial Day weekend, when construction of the privately funded wall began. According to The Epoch Times, the average donation received by We Build the Wall, Inc. was $67, and roughly $2 million was raised by $5 donations, demonstrating that many Americans want to see a wall built— even if they have to pay for it with private funds. “I realized that everyone can have an impact, and if you think you can’t have an impact then you’re wrong, because everyone who donated had a big impact,” Kolfage explained to The Epoch Times.

The recently completed half-mile section of the border wall was constructed near Sunland Park, N.M. in an area known to have long been exploited by illegal aliens, human and drug traffickers, and others attempting to illegally enter the United States.

According to Mike Furey, the director of construction operations for We Build the Wall, Inc. who has overseen the project, the barrier will be a tremendous asset to U.S. Border Patrol agents. “We actually, literally, in this first half-mile, going up a 31% grade, have cut off 19 drug trails, walking trails, and trafficking trails,” Furey noted.

Kolfage and his organization have big plans for the future and hope to continue to generate donation revenue to fund their other planned projects. “We have made a list of every single landowner on the U.S. border, and we have constantly been going down the list and making contact with each one, networking and figuring out who fits the mold for what we want to do,” Kolfage stated. “Currently, we have about 10 properties in the pipeline after this.”

News broke earlier in June that the International Boundary and Water Commission (IWBC), an agency that regulates waterway issues between the United States and Mexico, ordered that a gate built into the recently completed wall be left open for officials to access certain watersheds. Kolfage and his group protested this decision, and recently announced on Twitter that the “border wall and gate are secure again” after consulting with IBWC officials.

The efforts of Kolfage and thousands of Americans who have supported his project are a testament to the seriousness of the border crisis. Millions of illegal aliens, including countless minors, have flooded the U.S. in recent years, often with fraudulent asylum claims, fake paperwork, and little to no money or skills necessary to compete in an advanced economy. The vast majority are not appearing for their court hearing to adjudicate their asylum claims, and customs and immigration agencies are overwhelmed by the sheer number of individuals seeking to enter the United States.

If the Trump administration and congressional representatives continue to fail to secure the U.S. border and address the border crisis, hard-working and dedicated American patriots will step in and get the job done. 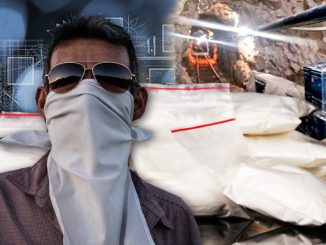