Some of Chicago’s wealthiest and most prominent neighborhoods are struggling to recover following the widespread looting, vandalism, destruction, and wanton criminality that occurred roughly two weeks ago in the early morning hours of Monday, Aug. 10, all inspired by rhetoric from Black Lives Matter (BLM) organizers in the city.

The previous day, Chicago police responded to a call for assistance with an armed suspect in the city’s Englewood neighborhood on the city’s South Side at about 2:30 p.m. Officers soon confronted a man in an alley matching the description provided by local residents, prompting the suspect to flee on foot. During the chase, the suspect fired rounds at pursuing officers, who then returned fire, striking and injuring the man before he was taken into custody.

Latrell Allen, a 20-year-old black man with a lengthy criminal record, including arrests for domestic battery and endangering a child, according to Chicago Police Superintendent David Brown, was eventually arrested and charged with attempted murder after fleeing from and firing on officers.

Shortly after the shooting, crowds of people inspired by BLM propaganda gathered and confronted officers at the scene. False rumors circulated in the community and on pro-BLM social media suggesting that the police had shot and killed a young, unarmed black boy. One social media post—once again containing BLM anti-police rhetoric—encouraged the city’s South Side residents to head into Chicago’s wealthy downtown neighborhoods to loot and pillage in response to yet another instance of alleged police brutality.

Later that evening and into the early morning hours, mobs of looters, vandals, and other criminals descended upon Chicago’s Gold Coast, Magnificent Mile, and Lincoln Park neighborhoods, among other wealthy parts of the city near the downtown business district, smashing windows of countless small and large businesses, stealing merchandise, cash registers, ATMs, and anything else they could get their hands on. Videos and photos of the looting quickly went viral, sparking shock and outrage across the country as yet another major American city descended into lawlessness and blatant criminality. BLM spokesmen called the looting “a form of reparations” that should be paid to all African-Americans because some of their ancestors allegedly had been slaves owned by somebody, sometime, somewhere in the United States.

Chicago has already gained notoriety for its widespread violence and gang activity, and President Donald Trump has repeatedly criticized the city’s lackluster response, threatening to send in federal agents to help quell the violence and criminality in recent weeks. In July alone, the city had 105 homicides recorded, marking a 139% increase from the previous July, according “ABC7Chicago.” Shootings are also up dramatically this year, with the vast majority of both shooting and homicide victims being young black residents.

City and police officials in Chicago were unable to downplay or justify the looting and violence in the city’s downtown neighborhoods, as left-wing political leaders are fond of doing in the aftermath of largescale rioting and looting sparked by racial tensions inflamed by the deceitful, race-baiting left-wing mass media. Police Superintendent Brown, one of three top black leaders in the Chicago Police Department, was disgusted, described the looting and violence as “pure criminality” that had nothing whatsoever to do with protesting alleged police brutality or racial injustice.

During a press conference with other city leaders following the looting, Brown specifically pointed to the lenient treatment criminals, looters, and vandals have received in recent weeks and months following widespread looting and criminality sparked by the death of George Floyd in late May. As in countless other major American cities, local prosecutors—too scared to challenge the well-funded BLM Marxist alliance—have largely failed to bring serious charges or take action against those participating in the widespread rioting and looting, sending a clear signal to the criminal elements engaging in this behavior.

“Not many of those cases were prosecuted to the full extent,” Brown noted, referring to the criminal chaos and mayhem during the riots following Floyd’s death. “These looters, these thieves, these criminals [are] being emboldened by [the lack of] consequences . . . emboldened to do more.”

Democratic Mayor Lori Lightfoot, the highest-ranking elected black political leader in the city—and one who has consistently praised the mission of BLM to end “white supremacy” and the “systemic racism” of white people—echoed much of what Brown had to say about the looting and criminality. “This was straight-up felony criminal conduct,” Mayor Lightfoot surprisingly stated during the press conference. “This was an assault on our city.”

She quickly stepped in to stop the press conference when Brown began to answer more questions from reporters a little too honestly for Lightfoot’s liking, shooing Brown away from the podium before she could be further embarrassed.

According to Chicago police, over 100 people were arrested during the mostly black looting and rioting, with 13 officers sustaining injuries. Police were even fired upon by the looters in certain instances, including while attempting to arrest a man who had stolen a cash register.

However, to her credit—and to the shock of many pundits watching the situation in Chicago—Lightfoot, one of the most radical, anti-Trump, leftwing political leaders in America, vowed to pursue the criminals who looted and destroyed some of the most popular and iconic sections of the Windy City.

“We saw you, and we will come after you,” Lightfoot warned.

Will other Democratic mayors and legislators—from city councils to the halls of Congress—ever stand up in unison and condemn this assault on once-great U.S. cities and the American people? 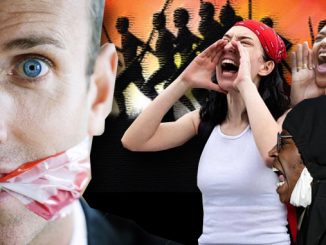