The Black Lives Matter (BLM) movement and its various far-left and Antifa allies are openly working to bring about the destruction of America, as is increasingly becoming clear each passing day. While millions of average Americans and virtually every multi-billion-dollar corporation in America supports the BLM movement, few truly understand its radical, Marxist, anti-American agenda. And they should.

Do not kid yourself: This is how almost all Marxist revolutions have begun throughout history, their dangerous ideological organizations bolstered by massive funding from ultra-liberal elites. Without this kind of funding, the Russian Revolution, for instance, would have died in its infancy. And only torrents of money coming from Western corporate elites kept Soviet industry alive for many decades.

As previously reported in the pages of American Free Press, the founding members of the BLM movement are “trained Marxists” and work in partnership and collaborate with a variety of other radical, revolutionary, left-wing groups, ranging from loosely affiliated Antifa groups to well-organized activist organizations, such as the Sunrise Movement—which is financed by a well-funded Washington, D.C. PAC—among many others.

While focusing on the alleged plight of blacks, both in America and around the world, the BLM movement is a globally networked subversive organization seeking to undermine and destroy traditional Western civilization.

On its official website, BLM affirms its support for all black lives “regardless of actual or perceived sexual identity, gender identity, gender expression, economic status, ability, disability, religious beliefs or disbeliefs, immigration status, or location,” demonstrating its cultural Marxist orientation. Furthermore, BLM actively creates “space for transgender brothers and sisters to participate and lead” while working “to dismantle cisgender privilege and uplift black trans folk.” The group openly seeks to “disrupt the Western-prescribed nuclear family structure requirement by supporting each other as extended families and ‘villages’ that collectively care for one another,” while seeking to “foster a queer-affirming network” with the purpose of “freeing ourselves from the tight grip of heteronormative thinking.”

This does not jibe with reality. Recently, violent BLM “protesters” brutally attacked a white couple who had stopped to help a transvestite who was himself being beaten by BLM supporters. (See photo of victim on facing page.—Ed.)

As has been so clearly on display in recent weeks and months, BLM-inspired protests regularly devolve into widespread rioting, looting, criminality, and violence, with those engaging in such destructive, lawless behavior rarely facing any consequences. BLM leaders across the country have made no secret of their

radical, destructive intentions, openly declaring that they will destroy the country if their demands are not met.

“If this country doesn’t give us what we want, then we will burn down this system and replace it,” Hawk Newsome, the president of the Greater New York Black Lives Matter chapter, said in an interview with Fox News in late June. “And I could be speaking… figuratively. I could be speaking literally. It’s a matter of interpretation.”

Other BLM activists have made similar remarks in cities across the country, while their actions have wreaked havoc and destruction in virtually every major American city.

The radical, Marxist agenda of the BLM movement is becoming increasingly obvious to Americans paying attention to the civil unrest that has been unleashed across the country. The time to reestablish the rule of law and reject the goals and aims of this anti-American movement has come.

But here are several uncomfortable facts. It appears BLM and Antifa are joining forces and their “peaceful protests” frequently overlap, with no dissension seen between protesting factions. Currently, the vast majority of Antifa members and BLM street marchers are white. Without this army of brainwashed Caucasians—indoctrinated in the halls of America’s hijacked institutes of higher education—BLM and Antifa would have already been exposed and dissolved as movements.

And those voters whose distaste for the personality of Donald Trump has convinced them to vote for oe Biden need to wake up. Many believe that if Biden and Kamala Harris are elected, Black Lives Matter terrorism will suddenly vanish. These voters could be tragically mistaken. Once creatures like this are fed with literally hundreds of millions of corporate dollars, and the beast sees Democratic members of Congress take a knee to worship their violent ideology, it is doubtful it will willingly go back into its lair.

Whoever wins in November—Trump or Biden—the president and his administration will have to deal with a budding Marxist revolution that will inevitably have to be crushed by force, as no amount of cajoling will suffice to soothe this rampaging two-headed Bolshevik hydra. 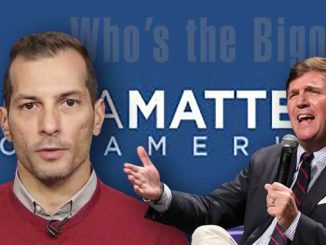