Has a newly uncovered memo, withheld by the Department of Justice prosecution in violation of the court’s discovery order, cleared Trump advisor Michael Flynn?

The attorney for beleaguered Gen. Michael Flynn claims to have uncovered a memo that is exculpatory toward his client. In light of this, Flynn’s lawyer, Sidney Powell* will ask U.S. District Judge Emmett Sullivan to delay a conference scheduled to discuss Flynn’s potential cooperation with prosecutors.

In a recent hearing, Powell noted that the Department of Justice had sat on the texts between FBI employees Lisa Page and Peter Strzok for months, violating the court’s discovery order. “There is far more at stake here than sentencing. As new counsel, we have an ethical obligation to review everything that has happened in the case or not happened, as the case may be, and that is why we filed the motion to compel production of Brady material. There have been stunning failures to produce Brady in this case, going back as far as July 2017 when the government had the Page-Strzok text messages … sufficient to cause the removal of Mr. Strzok and Ms. Page, yet not a single Page-Strzok text message was produced to the defense.” The Brady referred to is a pretrial discovery rule that requires the prosecution to turn over all evidence that may prove defendants are innocent to the defendants and their lawyers in criminal cases.

Other documents that the Department of Justice are still withholding include a “Russian agent” exoneration memo from Jan. 30, 2017 and a Feb. 8, 2017 memo clearing Flynn of Logan Act allegations, insinuated by former FBI Deputy Director Andrew McCabe.

Powell went on to charge “egregious government misconduct and long-time suppression of crucial Brady material that should have been provided to the defense before there ever was a plea.” Journalist Sara Carter broke the story about the bombshell Jan. 30, 2017 memo that conclusively destroys all the inferences that Flynn was guilty of collusion with Russia.

“Judge Sullivan is obviously taking the Brady issues very seriously and clearly told the prosecutors that his Brady order stands regardless of the plea agreement or the plea,” Powell told Carter. “If the prosecutors here were seeking justice instead of a conviction, Gen. Flynn would not have been prosecuted. They have been hiding evidence that he was exonerated in early 2017.”

Judicial Watch president Tom Fitton has urged President Donald Trump to pardon Flynn. Other than to wish him “good luck” before the sentencing process, Trump hasn’t indicated any willingness to do this. In May of this year, Trump unleashed a self-serving Tweet, declaring, “It now seems General Flynn was under investigation long before [it] was common knowledge. It would have been impossible for me to know this but, if that was the case, and with me being one of two people who would become president, why was I not told so that I could make a change?”

In March 2017, the National Enquirer, run by longtime Trump friend David Pecker, alleged that Flynn was a Russian spy. The story, in fact, quoted “top White House officials” who claimed that Flynn “was, in essence, the Russian spy in Trump’s midst!” One of those officials may well have been Vice President Mike Pence, who was said to be working behind the scenes to make Flynn the fall guy. In June 2017, Trump’s White House Special Counsel Ty Cobb sent an email to White House social media director Dan Scavino, in which he wrote: “I have great confidence there is nothing there implicating the president or the White House. Manafort and Flynn have issues separate and apart from the [White House] that will cause the investigation to linger but am hoping we get a clean bill of health soon.”

The entire Russian “collusion” fairy tale has claimed a few victims, despite Mueller’s “investigation” all but acknowledging there was absolutely nothing to it. While Trump appears to be safe, Paul Manafort, Roger Stone, Jerome Corsi, and Flynn may be the hapless scapegoats, unfairly punished over a totally imaginary, politically motivated conspiracy theory. Some have speculated that it’s no coincidence that all of those targeted and facing legal repercussions appear to be the few individuals outside the swamp that Trump promised to drain, but quickly filled with nothing but establishment figures.

When Flynn was forced from his position of national security advisor after less than a month on the job, he was unceremoniously labeled a “conspiracy theorist” by the mainstream media. Flynn was particularly taken to task for directing his Twitter followers to alternative news sources and blogs.

“To give [conspiracies] that sort of endorsement without checking the facts thoroughly is not something you associate with national security,” charged George Washington University professor Elizabeth Saunders.

Instead of “conspiracy theorist” Flynn, Trump eventually wound up with the likes of warmongers John Bolton and Mike Pompeo, to the delight of neocons everywhere. 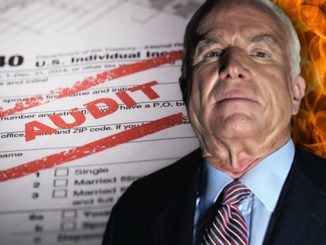 McCain Behind Targeting of Tea Party