A former United States federal prosecutor has written a book that confirms that the highest levels of prosecutorial power in this country have been and still are subverting the written law to advance their own particular agendas, including imprisoning innocent Americans and even deciding which prison they should be assigned to and how they should be treated by the warden and the guards.

Dave Gahary had the opportunity to sit down with Ms. Sidney Powell, the author of Licensed to Lie: Exposing Corruption in the Department of Justice, a 10-year federal prosecutor who has worked under nine different U.S. attorneys. For the last 20 years, she has been in private practice doing federal appeals, and has done over 500 federal appeals, 350 of them for the government, and about 150 in private practice, and discusses her book in this informative interview (44:43). 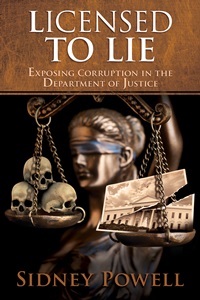 The Halls of Injustice…

• Insider details criminal behavior at the highest levels of the U.S. Department of Justice

As has been reported for over a decade in the pages of AMERICAN FREE PRESS, the United States Department of Justice’s (DoJ) dispensing of justice has not always been in accord with the U.S. Constitution, Supreme Court and legal ethics.

Now, a former federal prosecutor has written a book that, on several levels, confirms what many of this newspaper’s editors, writers and readers have suspected for quite some time: that the highest levels of prosecutorial power in this country have been and still are subverting the written law to advance their own particular agendas, including imprisoning innocent Americans and even deciding which prison they should be assigned to and how they should be treated by the warden and the guards.

On October 5, this reporter interviewed Sidney Powell, the author of Licensed to Lie: Exposing Corruption in the Department of Justice. Ms. Powell, a 10-year federal prosecutor, worked under nine different U.S. attorneys, and for the last 20 years has been in private practice doing federal appeals. She has done over 500 federal appeals, 350 of them for the government, and about 150 in private practice.

Licensed to Lie takes the reader on an incredible journey through the initial litigation of the white-shoe accounting firm Arthur Andersen and the aggressive energy giant Enron, all the way to the appeals of these high-profile cases to the U.S. Supreme Court. What Powell uncovered as a trial lawyer for several of the defendants targeted by the Enron Task Force is incredibly frightening and should be required reading for all Americans. Incredibly, Powell names the names, and shows how those who violated the Constitution were rewarded with promotions and are currently occupying great seats of power in the U.S. justice system.

Ms. Powell, who had wanted to be a lawyer since she was five-years-old, would rush home from school to watch episodes of Perry Mason on TV, and was in many ways forced to write this book when she experienced first-hand how justice had been subverted by the DoJ and pro-government judges.

“I found that behavior so appalling and so dishonest and corrupt,” Ms. Powell explained, “that I absolutely had to write the book. This is not a book I ever wanted to write. It broke my heart to have to write it, but I had to, because I couldn’t stand letting this kind of conduct go uncorrected.”

It wasn’t always like this. Ms. Powell explained how she was trained throughout her career in the DoJ. “The U.S. attorneys always told me to do what was right and to do it the right way,” she explained. “I never felt any sort of political pressure or internal pressure in the office to achieve any particular result but simply to follow the law and to treat people fairly, and that’s the way all the assistant U.S. attorneys I knew and worked with proceeded.”

Perhaps the main theme of the book is how government prosecutors regularly hide so-called “Brady material,” exculpatory evidence that could bolster the defense’s case.

“There’s a Constitutional doctrine called Brady versus Maryland,” explained Ms. Powell. “And that case says that the Constitution requires federal prosecutors, who hold all the cards in a criminal prosecution, to provide to a defendant any evidence that is favorable to his defense.”

Ms. Powell said, “the Enron Task Force prosecutors had failed utterly in their obligation to produce Brady material, and engaged in numerous other high-handed and terrorist tactics to prosecute the people [who caused] the collapse of Enron.”

The same tactics were used by the DoJ in the indictment, prosecution and conviction of former U.S. Senator Ted Stevens, the longest-serving senator from the state of Alaska.

“In that case,” Ms. Powell explained, “the prosecutors intentionally and systematically withheld evidence that was favorable to his defense.”

Stevens’s indictment and conviction were later overturned, as was Andersen’s, but not before it was put out of business and 85,000 people worldwide lost their jobs.

Ms. Powell was asked how can we, as Americans, be certain that any trials are untainted.

“It’s very hard to have that level of certainty,” Powell said. “Each trial has to be evaluated on its own, the facts of each case on their own, in front of a fully-informed and attentive jury. And until we have that, everyone is at risk of being prosecuted.”

Although she knows of several judges who have read the book, there has been almost a total mainstream media blackout of her revelations.

“The major networks have refused to do anything with it,” she said.

The book has cost her more than just risks to her professional career, even losing life-long friendships, but Ms. Powell is unwavering.

“We have to hold each other accountable when we don’t do the right thing,” she explained. “We have to be willing to look at ourselves in the mirror; I’ve tried to do that every day of my life, to make sure I stay on the right path. We have to do that with our friends and our family and people we care about. I did not mean to hurt anyone, but we’ve got to start speaking and dealing with the truth.”