Decades of brainwashing have convinced Americans we should kill foreign leaders.

In 1976, President Gerald Ford signed Executive Order 11905, which prohibited any member of the United States government from engaging or conspiring to engage in a political assassination anywhere in the world. Ford was pressured into doing so, due to disclosures from the Senate committee chaired by Sen. Frank Church (D-Idaho), which exposed CIA plots to kill Fidel Castro and other foreign leaders. At the time, public opinion polls showed that a majority of Americans were morally opposed to assassinating even foreign leaders such as Adolf Hitler or Benito Mussolini.

The recent assassination of Iranian Gen. Qassem Soleimani was the latest example of just how far American leadership, and public opinion, has drifted on this issue. President Donald Trump didn’t quite sink to the level he did after U.S. forces assassinated the alleged leader of ISIS, al- Baghdadi, last October, when he chided him for “dying like a dog” and “dying a coward.” But he did tell a cheering rally recently that the Soleimani assassination was an act of “American justice.” While 55% of Americans polled after the Soleimani assassination said it had made the United States less safe, this was undoubtedly skewed by the fact the mainstream media is so biased against anything Trump does.

A better barometer of modern public opinion came from the polls taken after President Barack Obama assassinated American citizen Anwar al-Awlaki with a drone in 2011. At that time, 56% of the public favored the use of drones in such assassinations. Obama memorably bragged about killing al-Awlaki, and then murdered his 16-year-old son the next month for good measure. Less publicized were the deaths by drone strikes of three other U.S. citizens, two in Yemen and one in Pakistan. Noticeably missing from the poll questions was any reference to the morality behind assassination. In fact, only 31% of Americans even expressed concern with the legal aspects of drone killings.

Obama, who bragged behind the scenes to his aides about being “really good at killing people,” also assassinated Libyan leader Muammar Qaddafi in 2011. Another high-profile “liberal,” then-Secretary of State Hillary Clinton, gleefully celebrated the Qaddafi killing during an interview with CBS News, boasting laughingly, “We came, we saw, he died.” Obama announced that “the shadow of tyranny over Libya has been lifted.”

While some leading figures such as Ralph Nader, Dennis Kucinich, and Ron Paul were appalled by the government’s actions in Libya, tried-and-true shills for the war state like John Mc-Cain, John Kerry, Nancy Pelosi, and others were in full support.

Neocon Senator Marco Rubio (R-Fla.)notably tweeted what was a clear warning to Venezuelan leader Nicolas Maduro last February, by contrasting before and after photos of Qaddafi. Like all the leaders in both U.S. “opposing” political parties, Rubio would unquestionably support the assassination of Maduro.

In 2011, Rubio celebrated Obama’s assassination of Qaddafi, but felt he hadn’t gone far enough. How much further one can go beyond assassination is something only bloodthirsty chicken hawks can explain. “If you’re an enemy of the United States and we have a chance to take a shot at you in a way that doesn’t hurt us, and has a chance of being successful, we’re probably going to take it,” Rubio declared at the time. “There’s a price to pay for being an enemy of the United States.” Affirming their continued support for neocon principles, Rubio, like Lindsay Graham and other high-profile neocons, was critical of Trump when he met with Vladimir Putin and attempted a dialogue with North Korean leader Kim Jong Un.

At the time, Obama issued what was widely considered a veiled threat to leaders of countries like Syria, Yemen, and Iran with his comment, “For the region, today’s events prove once more that the rule of an iron fist inevitably comes to an end.”

War hawks in both parties celebrated Qaddafi’s death along with Obama and Clinton. Mitt Romney declared, “The world is a better place with Gaddafi gone.”

“The death of Muammar Qaddafi marks an end to the first phase of the Libyan revolution,” intoned Sen. John McCain (R-Ariz.).

Sen. Carl Levin (D-Mich.) praised, “The success of the Libyan people in rising up to overthrow a tyrant is a blow against dictatorship everywhere.” Except it wasn’t the “Libyan people” who assassinated Qaddafi.

2011 was a busy year for American assassins. Osama bin Laden was also allegedly killed that year by U.S. forces during a raid on his compound in Pakistan, a sovereign nation. The official narrative of his death was dubious, to say the least, but celebrations took place all over the country, including loud chants of “USA! USA!” at a nationally televised Major League Baseball game. George W. Bush said, “This momentous achievement marks a victory for America,” and Bill Clinton proclaimed it was “a profoundly important moment for people all over the world.” 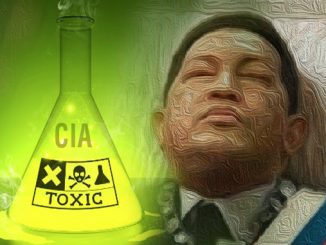