Democrats’ choice for VP is a political chimera of the worst sort.

Handlers for Democratic Party presidential candidate and former Vice President Joe Biden have chosen former California Attorney General Kamala Harris to be his running mate. In March 2020, Biden had promised that he would choose a woman. In June, pressure mounted for Biden to choose a woman of color. Last week, that’s exactly what he did as he chose Harris, who is of Indian and Jamaican descent. The initial reaction to the choice of Harris was outrage—and that was from classic progressives and those on the New Left. Harris’s career has been marked by a dubious rise and sleazy practices that are even more questionable in the context of what America has become in 2020.

It’s considered “mean girl” journalism to say that Harris slept her way to the top. Therefore, on such a fragile matter, Americans should turn to the paramour himself, Willie Brown, the former mayor of San Francisco and speaker of the California assembly. Brown was in his 60s and married when he dated Harris, then in her late 20s, a relationship Brown confirmed in a January 2019 op-ed piece for the San Francisco Chronicle. “Yes, we dated,” Brown wrote. “It was more than 20 years ago. Yes, I may have influenced her career by appointing her to two state commissions when I was Assembly speaker.” The former mayor admits openly he made sure Harris busted through the arduous passthrough door of Democratic politics in California. Her first appointment under Brown, a position on California’s Unemployment Insurance Appeals Board, paid an annual salary of $97,088 in 1994.

It’s at this point in Harris’s long career that she began warring with progressives. The 1990s were a prosecutorial decade helmed mostly by the administration of President Bill Clinton. One legislative landmark of the era was the 1994 crime bill (formally the Violent Crime Control and Law Enforcement Act). Biden was the chief architect of the draconian bill, as he had chaired the Senate Judiciary Committee for years and had worked to impose on America the tough-on-crime laws that the Clintons favored. The bill led to an historic incarceration rate, more prisons, and a proliferation of aggressive policing and sentencing measures across the country. In California, it led to three-strikes-and-you’re-out legislation that sought to end any possibility for change as a former young criminal matured into adulthood by enforcing mandatory life sentences.

For the office of district attorney of San Francisco, in 2003, Harris challenged Terence Hallinan, a civil rights activist who had also been an early supporter for the legalization of marijuana and the treatment of sex work as a public health problem rather than a crime. Hallinan was openly resisting the national trend that had been pushed by Clinton and Biden by favoring “diversion,” a tactic which diverts drug crimes into rehabilitative alternatives rather than incarceration. Harris ran directly at Hallinan by promising she would be tough on crime and by painting Hallinan as someone unable to keep communities safe. In fact—contrary to Harris’s claims—violent crimes in San Francisco had dropped 60% under Hallinan’s watch.

In an incendiary campaign flyer, the Harris campaign pictured a Latino man, shirtless, tattooed, flashing gang signs, and wielding a gun. In large lettering, the phrase “Enough is Enough!” is blistered across the top of the ad. At the bottom is the phrase “A New Voice for Justice.” Harris also cultivated an enormous fundraising machine made up of social philanthropists and elite status-builders. This resulted in the campaign being fined for breaking fundraising limits. Harris won as the Chronicle endorsed her with an article headlined “Harris for Law and Order.” Interesting in light of the events of 2020.

In the year of Black Lives Matter and defund the police activism and the lawlessness that has accompanied those movements in multiple American cities, the Democrats wanted to give concerned voters someone who could be perceived as tough on crime. Harris fit the bill. Harris was the architect behind mass incarceration and California’s top cop, an attorney general who proudly locked up over 1,500 people on marijuana violations. In an act of callous hypocrisy, Harris later laughed on a New York radio station about having smoked pot earlier in her life.

As he left office, Hallinan had left Harris “hundreds of pages” of internal documents detailing internal Catholic Church issues concerning over 40 priests accused of sexual misconduct. Hallinan was building a case against the priests and was going to release the documents after redacting the names of the victims listed in the documents. When Harris took office, those documents were lost. As author Peter Schweizer, author of Profiles in Corruption, told news host Tucker Carlson, “So it’s a massive cover-up and a lot of the people that financed her campaign to beat Hallinan were law firms and lawyers and people connected to the Church hierarchy who did not want those documents to come out.” The Associated Press had also reported that the victims of the abuse were openly criticizing Harris’s lack of attention to the problem of sexual abuse by priests.

Schweitzer put this all into a national context. “From 2004 to 2011, she was San Francisco attorney general. She did not prosecute a single case of sexual abuse involving Catholic Church priests,” Schweizer said. “To put that in context, of the 50 largest cities in America, all 50 of them prosecuted at least one case during that time period, except for Kamala Harris.”

Harris won the election to become California’s attorney general in 2010. As attorney general, Harris continued pushing for more convictions and longer sentences, both of which disproportionately caged African-Americans in California. Harris also favored punishing parents with misdemeanors for truant school children, also disproportionately punishing African-American families. Harris also supported state civil asset forfeiture (it had only been federal before), allowing the state to seize assets of an accused violator before criminal proceedings had been initiated.

In 2017, Harris became the junior U.S. senator representing California, replacing the retired Barbara Boxer. While in the Senate, Harris has opposed all efforts to curb illegal immigration. Recently, she voted against Bernie Sanders’s attempt to reduce the fiscal footprint of the National Defense Authorization Act.

Harris has also maintained an unyielding support for Israel. At the 2017 AIPAC conference, Harris said, “I will do everything in my power to ensure broad and bipartisan support for Israel’s security and right to self-defense.” In January 2019, independent journalist Whitney Webb wrote that “Kamala Harris has sought to publicly cast herself as progressive while privately catering to special interests, including the Israel lobby.”

The Biden-Harris campaign is already back pedaling the criticism of Biden as a longtime racist by Harris in the 2020 primaries. At the first Democratic debate in June, Harris went after Biden for making positive remarks about his work with segregationist senators and being a leading opponent of school busing in the 1970s and 1980s.

In addition, in April, Harris said she believed Biden’s sexual assault accusers, including Tara Reade, who accused Biden of making unwanted sexual contact with her in a Capitol Hill office stairwell. “I believe them, and I respect them for being able to tell their story and having the courage to do it,” Harris insisted, basically accepting that Biden had assaulted Reade.

Progressives within the Democratic Party were hoping 2020 would be an opportunity to show growth. They were hoping for an A+ ticket and were sour when the result, to them, was a solid D. They’ll either clench their teeth and support Biden, unhappily, they’ll vote third party or they won’t vote at all. What they didn’t want was a continuation of the Clinton and Obama years, yet, that’s exactly what they got in both Biden and Harris.

Max Berger, a former aide to Sen. Elizabeth Warren’s campaign, said, “From an electoral perspective, it’s a great pick.” He argued that Harris could excite women as well as black and Hispanic Americans. “From a governing perspective, it’s a wash. From a long-term perspective, it’s a disaster.” Left-leaning author and RFK scholar Lisa Pease tweeted, “Biden-Harris isn’t the ‘lesser’ evil. They’re just a different flavor of evil.”

Though John Adams famously trashed the role of vice president as “the most insignificant office that ever the invention of man contrived or his imagination conceived,” the old adage remains true: The vice president is “one heartbeat away” from the Oval Office. In Biden’s case, fast approaching 78 with a problematic health record and obvious mental deterioration, the nation’s top office could be one aneurysm or dementia diagnosis away for Harris, who would then be the first woman ever to hold the office of the presidency.

For Biden, she is the perfect candidate. For America, Harris has banked a career on exacerbating America’s most troubling problems rather than offering any real solutions. 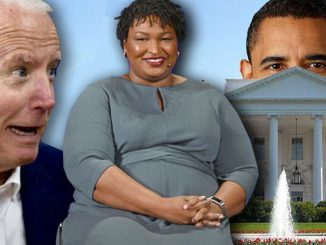 Democrats Downplay Their Own Spy Scandal