The first wave of criticism aimed at Joe Biden’s appointments didn’t come from the political right. It came from the “Justice Democrats.”

Justice Democrats’ Executive Director Alexandra Rojas said in a statement, “If Joe Biden continues making corporate-friendly appointments to his White House, he will risk quickly fracturing the hard-earned goodwill his team built with progressives to defeat Donald Trump. A Biden administration dominated by corporate-friendly insiders like [former Biden chief of staff] Steve Ricchetti and [Rep.] Cedric Richmond [D-La.] will not help the president-elect usher in the most progressive Democratic administration in generations.”

Rojas is simply stating the obvious. Most left-leaning Democrats knew all along that Biden’s ideological home was not that many ticks away from Mitt Romney and John McCain on the political continuum. He has spent decades firmly entrenched in the corporatist wing of the Democratic Party, as McCain had and Romney continues to do within the Republican Party. They serve corporate interests (donors) first and the people second.

Ricchetti has a long history as a lobbyist for the pharmaceutical industry. As a congressman, Richmond, the national co-chair of the Biden campaign, was a favorite recipient of donations from the fossil fuel industry. Both are beholden to donors.

There was the expected criticism from the right. Sen. Marco Rubio (R-Fla.) tweeted, “Biden’s cabinet picks went to Ivy League schools, have strong resumes, attend all the right conferences [and] will be polite [and] orderly caretakers of America’s decline.” Sen. Tom Cotton (R-Ark.) said the Biden choices would be a “return of the Obama administration’s foreign policy,” which “had disastrous consequences for our nation.”

Antony Blinken (State Department) is a Harvard and Columbia Law School graduate. Rather than being someone who has long advocated for diplomacy, which the State Department’s leader should do, Blinken has been a forceful advocate for America’s interventionism abroad. When then-Sen. Biden voted to use force in Iraq, Blinken was one of his chief advisers.

A chief critic of Mr. Biden’s pro-war appointees from the left has been independent journalist Caitlin Johnstone. She wrote about Blinken that his “career has been a pendulum between expanding the U.S. empire and helping corporate power knit itself more deeply into that empire. Within the Obama administration, he backed the unforgivably devastating interventions in Libya and Syria as well as the 2014 Ukraine coup, he was a major proponent of backing the Saudi-led mass atrocities in Yemen, and he says such proxy conflicts will be the new model for U.S. interventionism going forward.”

Janet Yellen (Treasury Department) attended Brown, another Ivy League school, and is the former chairman of the Federal Reserve. There will be no “Audit the Fed” cries emanating from the Biden Treasury Department.

Jake Sullivan (national security advisor) went to Yale. Sullivan was a top advisor to Hillary Clinton, and he was one of the biggest champions of the disastrous invasions of Libya. Sullivan was also a major proponent of the Russiagate theory and met with reporters before the 2016 election to push the fake story. According to Fox News, Sullivan described how he “sat with [reporters and news stations] and walked through what we understood to be the case from—in terms of the Democratic National Committee hack and leak, what we believed to be the case with respect to Russian involvement and then what we thought the upshot of this was, which is you now have the start of a much more aggressive phase of an intelligence-led operation by foreign power, and there’s likely to be more as we go forward, and people should really pay attention to this.”

Alejandro Mayorkas (Homeland Security) served as the deputy secretary of Homeland Security in the Obama administration from 2013 to 2016. This is a questionable choice, as he was the subject of an Obama-era inspector general’s report that found that Mayorkas had colluded with foreign investors through an EB-5 visa program that allows job creators an easier path of entrance into America.

Sen. Cotton tweeted, “Alejandro Mayorkas was found by Barack Obama’s inspector general to be guilty of selling green cards to Chinese nationals on behalf of rich, Democratic donors. He is disqualified from leading the Department of Homeland Security.”

There has been a backlash from the left and the right against the potential choice of Michelle Flournoy at the Defense Department. Flournoy serves on the board of directors at Booz Allen, a major defense contractor. The assumption is that for defense contractors to do well, militaristic action must be a constant.

Assessing the large number of defense-and intelligence- linked women chosen by Biden, Johnstone wrote, “Let’s clear this up before the girl power parade starts: The first woman to head the U.S. war machine will not be a groundbreaking pioneer of feminist achievement. She

will be a mass murderer who wears Spanx [slimming undergarments]. Her appointment will not be an advancement for women, it will be imperialism in pumps.” Analysts have questioned whether this is Obama’s third administration being appointed, one by one. That’s fair. It certainly seems like Obama’s major leaguers all retired, and Biden has promoted the ragtag triple-A team to “the big show.” 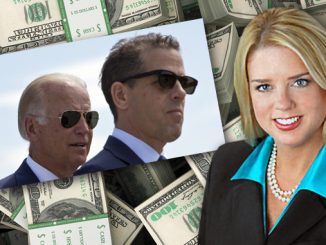