Federal agents and prosecutors repeatedly lied and hid evidence during the Cliven Bundy legal proceedings, prompting Judge Gloria Navarro to dismiss the entire case with prejudice. The government is thus barred from prosecuting these patriots again on these charges. The long nightmare Bundy and his family and supporters have faced is over.

On Jan. 8, U.S. federal Judge Gloria Navarro dismissed with prejudice the case against Cliven Bundy and his sons, Ammon and Ryan, and Ryan Payne. After spending nearly two years in prison, the Bundys celebrated their hard-fought victory along with property-rights advocates and proponents of small government around the country.

Cliven Bundy spoke with AFP on Jan. 9 in an exclusive interview. He said he was filled with joy and relief over the fact that his ordeal, and that of his family and supporters, is essentially over, and chuckled that he was a bit jaded from giving nonstop press interviews

“I went into that place a free man and I intended to leave it as a free man,” Bundy stated, referring to the jail in which he spent 700 days.

During his incarceration, federal prosecutors feverishly tried to nail these patriotic men for resisting and protesting an attempted but failed impoundment of Cliven’s cattle by armed Bureau of Land Management and FBI agents.

The “Bunkerville standoff” in Clark County, Nev. in April of 2014 made world headlines. Scores of supporters, some of whom were armed in the open-carry state, showed up that spring from across the nation to stand with the Bundys. No shots were fired by either side, and the feds eventually backed down.

When AFP spoke with Bundy on the phone, his sons and other family and friends could be heard chatting and laughing in the background.

He commented that, under Article III of the Constitution, judges can hold office only during periods of good behavior.

“Good behavior is when our judges are in tune with the Constitution. When you’ve got judges like I had in my case—abridging the Constitution—nobody holds them accountable,” he remarked.

Bundy was referring to several rulings that, among other things, allowed prosecutors to retry Bundy, his sons, and his supporters—even though juries had repeatedly decided in favor of the ranchers and their friends.

Bundy summarized for AFP: “They tried to ruin my ranch, my heritage, and my posterity. But we’re in the cattle business and we intend to stay there.”

On Jan. 9, AFP spoke with popular radio show host Jim Lambley, the owner of KSDZ-FM, about the long and difficult case that was brought against Cliven Bundy, his sons, and several supporters. Lambley’s station in Nebraska, known as the “The Twister,” has reported on the Bundy case more than any other licensed broadcast-media outlet.

“The government needs to write some checks because it stole the lives of these people for two years,” Lambley commented to AFP, just after the dismissal was announced.

The Jan. 8 dismissal followed Judge Gloria Navarro’s Dec. 20, 2017 decision to declare a mistrial in the proceedings against Bundy and the three others. That alone was a stunning development in the saga of the elder Nevada rancher whose devotion to principle, like that of his sons and supporters, represents in the minds of many a repudiation of the arbitrary exercise of federal power.

Throughout this grueling case, Judge Navarro was believed to be largely unsympathetic to the defendants, but when she decided to dismiss the charges, she stated that prosecutors willfully withheld evidence from defense lawyers, which is what tipped the scales. She referred to it as “flagrant prosecutorial misconduct.”

She also declared, “The court finds that the universal sense of justice has been violated.” Her statement implies the government’s misdeeds in this case are legion.

Government misdeeds were not limited to the courtroom. Marooning the defendants in jail for so long, of course, denied them the fair and speedy trial required by the Constitution. Both Ammon and Ryan Bundy were grossly humiliated when they were subjected to body cavity searches every time they were transferred from their jail cells to the U.S. District Court. The government even imposed solitary confinement at times.

Given the conduct of their jailers, you’d think that Bundy and company had already been convicted and sentenced.

Lambley agreed with this AFP writer’s observation that it appears the government committed an especially grave miscarriage of justice in the way it handled the series of Bundy show-trial proceedings that started in February 2016 and finally concluded Jan. 8. Nearly 20 defendants in all were tried under a 16-count indictment consisting of rather vague and redundant conspiracy, obstruction, and weapons charges, among others.

Legal expert Roger Roots, who observed the court proceedings from start to finish, feels Cliven Bundy was correct when he said, right after the dismissal, that he had been jailed for 700 days as a “political prisoner” for refusing to acknowledge federal supremacy over the public land near his southern-Nevada cattle ranch, where his cattle have long grazed. The impoundment was said to have been ordered over Bundy not paying grazing fees, but citing the area’s unique history, he maintains that federal jurisdiction was never established over Clark County.

Asked if Bundy and the 19 others had indeed been political prisoners, Roots replied: “If they had been left-wingers they would never have been looking at such ridiculous charges. The thing about Cliven and the others is that they provided real resistance with real constitutional principles.”

Crucial remaining matters include the Las Vegas Review Journal’s motion to try to force the federal government to open all of its files in this case. If the motion succeeds, the documents could reveal whether illegally secret court hearings were held and, among many other things, provide more information on the existence of federal snipers in the vicinity of the standoff and the Bundy homestead—despite denials by the prosecution that the snipers existed and relevant evidence withheld from the defense.

Roots noted that, despite the judge throwing out the case with prejudice, a government appeal of the dismissal cannot be ruled out. 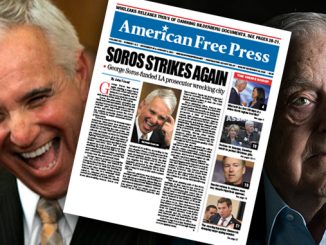 2 Comments on Victory for the Bundys