Shortsighted Democrats may have lost control of the genie they let out of the bottle.

Since the death of George Floyd beneath the knee of a cop in Minneapolis on Memorial Day, the nation has been instructed by its cultural elites that this is the daily reality that a racist America has too long ignored. Our nation, it was shouted in our faces, is a place where white cops harass, brutalize, assault and kill black Americans regularly and with impunity.

“Defund the police!” the Black Lives Matter demand went out, to be echoed and re-echoed by BLM’s amen corner of progressive elites.

The pendulum may be swinging back, for this weekend reintroduced us to the old familiar world.

In Washington, D.C., about midnight Saturday, at a block party in the Southeast sector of the city, three shooters fired 100 rounds, wounded 20, killed a teenager, and left a female police officer in critical condition. It appears to have been an attempted massacre, a slaughter. “More than 115 people have been slain in the District this year, a 17% increase over this time in 2019, which ended the year with a decade high,” reports The Washington Post.

D.C.’s numbers, however, pale by comparison to Chicago, where this weekend recorded 32 more people shot, with three dead.

According to the Sun-Times, there were 106 homicides in the city in July, a single-month body count almost equal to the toll D.C. has piled up in all of the first seven months of 2020.

Rarely in these stories of shootings and killings does one read that the dead were the victims of rogue cops or white supremacists.

Indeed, the front page of Monday’s New York Times gave voice to the city’s black and Hispanic leaders who are objecting to a proposed $1 billion cut in the police budget. The people in high-crime precincts, for whom these leaders speak, want more, not fewer, cops on the beat.

Even Portland, Ore., which has been indulging nightly protests since the killing of George Floyd, seems to be awakening to the real world.

When the Department of Homeland Security pulled its agents out of Portland and handed the defense of the Mark Hatfield federal courthouse to the state police, the “peaceful protesters” shifted their attention to the city’s buildings and Portland Police Bureau’s East Precinct.

With police personnel corralled inside, the East Precinct was barricaded with cars and wooden planks, and an attempt was made to set it afire by throwing flaming objects into the building.

Mugged by reality, Mayor Ted Wheeler seems to have belatedly awakened to the character of the protesters he has been coddling: “When you commit arson with an accelerant in an attempt to burn down a building that is occupied by people whom you have intentionally trapped inside, you are not demonstrating, you are attempting to commit murder.”

Equally problematic: “You will be creating the B-roll film that will be used in ads nationally to help Donald Trump during his campaign.”

Portland police union president Daryl Turner was enraged at what he had seen. “I am disgusted that our city has come to this,” said Turner. “If it is acceptable for rioters to . . . try and burn down occupied buildings, and if this conduct is allowed to continue, then Portland is lost.”

Wheeler, having gotten the message the rioters have been trying to deliver, finally ordered his city’s police to do “what is necessary” to quell the rioting, even if it means using tear gas.

What has happened in Portland, and across much of America, was predictable, and predicted. First, the progressives tolerate and even celebrate civil disobedience, because the cause is just and noble. Then, to hold onto public attention, the protesters march and block traffic. Next comes the cursing of cops, the throwing of trash, water bottles, and rocks. Then there’s the smashing of store windows, looting and arson, and Molotov cocktails. Finally, there’s instigating violence with cops to get footage of police fighting back so the law enforcement officers can be painted by the progressive press as stormtroopers and the Gestapo.

In Portland, we reached the point where “peaceful protesters” tried to set a building ablaze with cops barricaded inside.

This, as the mayor said, is attempted murder. Today, people watch their leaders in city after city fail to keep the peace and restore order as protesters riot at will, and they make plans to move out. In the suburbs and country, they quietly observe the inability of cops to quell the violence, and they buy guns.

While the right backs Trump’s stand for law and order, the ultimate battle here may be between liberal Democrats elected to run cities and then failing to run their cities, and the radical left and Marxists who welcome their failure, as they intend to kick the liberals down the stairs.

Democrats pretend it’s not happening; most Republicans are too scared to speak out.

Looting, arson, physical attacks, and widespread vandalism continue unabated across the country. More astonishingly, authorities in multiple major cities refuse to even attempt to stop it. And even worse, not a single Democratic politician has risen up to condemn the violence that threatens to pull this nation apart at the seams.

Carmen Best, Seattle’s first black police chief, recently resigned her position in response to the City Council’s decision to cut as many as 100 officers from the force, as well as slash her own salary by $10,000. Military veteran Best claimed not to be upset over her salary cut, but said, “It really is about the overarching lack of respect for the officers.”

Seattle Mayor Jenny Durkan paid tribute to Best, declaring, “Of all the major cities in America, Seattle had the chief that not only understands the lived experience of black America—because it is her experience—but has the deep experience in policing needed to change it.” City council members had been highly critical of both Best and Durkan, due to law enforcement officers using such non-lethal weapons as tear gas and pepper spray against protesters. Spokesmen for Black Lives Matter issued a rather confusing statement, which read, “It does nothing to further our fight for authentic police accountability and the safety of black lives, that the first black woman to hold the position of chief of police of the Seattle Police Department has been forced out of her job by the Seattle City Council.” Attorney General William Barr remarked, “This experience should be a lesson to state and local leaders about the real costs of irresponsible proposals to defund the police.”

Similar infighting was going on in crime-infested Chicago. Mayor Lori Lightfoot and Chicago Police Superintendent David Brown criticized Cook County State’s Attorney Kim Foxx for refusing to prosecute violent protesters. “Criminals took to the street with the confidence that there would be no consequences for their actions,” Brown stated, “and I for one refuse to allow these cowardly acts to hold our city hostage.” Lightfoot, meanwhile, who’d been steadfastly supportive of the protesters, declared that, “These people need to be held accountable and not cycled through the system.” Foxx responded by saying, “It does not serve us to have dishonest blame games when all of our hearts are breaking.” She maintained that she would prosecute looters, but not those exercising their First Amendment rights.

“When the cases are brought to us, and the facts and the evidence support it, we will charge those cases,” Foxx said. “I think we owe the people of Chicago more than a simplistic narrative.” The volatile Lightfoot warned a reporter who asked her about the dispute not to “bait us.” Foxx gained notoriety last year with her bungling of the Jussie Smollett “lynching” hoax.

Lightfoot was blasted as well by leading members of the city’s community. Alderman Ray Lopez of Ward 15 charged, “Unequivocally the mayor of Chicago is failing her city.” Residents questioned the lack of any plan to counter the often violent protests. “Well, let me tell you, it’s no question that the city of Chicago deserve, and they should demand better. The responses that the city is getting right now is atrocious,” said Alderman Anthony Beale of the 9th Ward. “Letting people just run amok out here in these communities to be able to loot and destroy properties like they’re doing right now, it’s a travesty.”

Alderman Brian Hopkins of Ward 2 added, “We can never allow this to happen again. So, I’m calling on the mayor right now: Have a plan, meet with the aldermen, [and] tell us how you’re going to prevent this from happening again.” The consistently arrogant Lightfoot reacted by saying, “I don’t spend a lot of time thinking about comments from people like that, that are always quick to criticism and don’t come forward with concrete solutions.” In response to criticism over the lack of body cams for police, Brown explained, “We will continue to look at scrubbing the inventory of body cams so that we can redistribute a contingent of body cams to some of these teams that were created from officers who were at one time plain clothes and now are in the neighborhoods patrolling.”

In Oregon, state police announced they were withdrawing protection for Portland’s federal courthouse in protest over the lack of prosecutions of violent protesters. Oregon State Police spokesman Timothy Fox stated that they were “continually reassessing our resources and the needs of our partner agencies, and at this time we are inclined to move those resources back to counties where prosecution of criminal conduct is still a priority.” Starting in June, police officers all across the country began to resign in disgust at being asked to stand down in the face of looting and destruction of property. Two months later, protests are still going on. Many inevitably devolve into chaos as legitimate protesters go home for the evening and the troublemakers remain to wreak havoc. 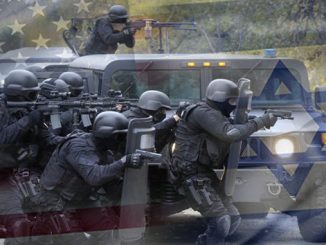