The D.C. establishment is wailing hysterically over the prospect of President Donald Trump refusing to instigate Cold War II so desired by the elite. But does the potential loss of control by the War Party warrant the Beltway elite’s accusations of treason against our commander-in-chief and even apparent calls for a military coup?

“Treason, Bribery, or other high Crimes and Misdemeanors.”

Under the Constitution, these are the offenses for which presidents can be impeached.

And to hear our elites, Donald Trump is guilty of them all.

Trump’s refusal to challenge Vladimir Putin’s claim at Helsinki—that his GRU boys did not hack Hillary Clinton’s campaign—has been called treason, a refusal to do his sworn duty to protect and defend the United States, by a former director of the CIA.

Famed journalists and former high officials of the U.S. government have called Russia’s hacking of the DNC “an act of war” comparable to Pearl Harbor.

The New York Times ran a story on how many are now charging Trump with treason. Others suggest Putin is blackmailing Trump, or has him on his payroll, or compromised Trump a long time ago.

Wailed Congressman Steve Cohen: “Where is our military folks? The Commander in Chief is in the hands of our enemy!”

Apparently, some on the left believe we need a military coup to save our democracy.

Not since Robert Welch of the John Birch Society called Dwight Eisenhower a “conscious agent of the Communist conspiracy,” have such charges been hurled at a president. But while the Birchers were a bit outside the mainstream, today it is the establishment itself bawling “Treason!”

What explains the hysteria?

The worst-case scenario would be that the establishment actually believes the nonsense it is spouting. But that is hard to credit. Like the boy who cried “Wolf!” the establishment has cried “Fascist!” too many times to be taken seriously.

A month ago, the never-Trumpers were comparing the separation of immigrant kids from detained adults, who brought them to the U.S. illegally, to FDR’s concentration camps for Japanese-Americans.

Some commentators equated the separations to what the Nazis did at Auschwitz.

If the establishment truly believed this nonsense, it would be an unacceptable security risk to let them near the levers of power ever again.

Using Occam’s razor, the real explanation for this behavior is the simplest one: America’s elites have been driven over the edge by Trump’s successes and their failure to block him.

Worst of all, Trump clearly intends to carry out his campaign pledge to improve relations with Russia and get along with Vladimir Putin.

“Over our dead bodies!” the Beltway elite seems to be shouting.

Such language approaches incitement to violence. One wonders if the haters are considering the impact of the words they are so casually using. Some of us yet recall how Dallas was charged with complicity in the death of JFK for slurs far less toxic than this.

The post-Helsinki hysteria reveals not merely the mindset of the president’s enemies, but the depth of their determination to destroy him.

They intend to break Trump and bring him down, to see him impeached, removed, indicted, and prosecuted, and the agenda on which he ran and was nominated and elected dumped onto the ash heap of history.

Thursday, Trump indicated that he knows exactly what is afoot, and threw down the gauntlet of defiance:

“The Fake News Media wants so badly to see a major confrontation with Russia, even a confrontation that could lead to war. They are pushing so recklessly hard and hate the fact that I’ll probably have a good relationship with Putin.”

Spot on. Trump is saying: I am going to call off this Cold War II before it breaks out into the hot war that nine U.S. presidents avoided, despite Soviet provocations far graver than Putin’s pilfering of DNC emails showing how Debbie Wasserman Schultz stuck it to Bernie Sanders.

Then the White House suggested Vlad may be coming to dinner this fall.

Trump is edging toward the defining battle of his presidency: a reshaping of U.S. foreign policy to avoid clashes and conflicts with Russia, and the shedding of Cold War commitments no longer rooted in the national interests of this country.

Yet, should he attempt to carry out his agenda—to get out of Syria, pull troops out of Germany, take a second look at NATO’s Article 5 commitment to go to war for 29 nations, some of which, like Montenegro, most Americans have never heard of—he is headed for the most brutal battle of his presidency.

This Helsinki hysteria is but a taste.

By cheering Brexit, dissing the EU, suggesting NATO is obsolete, departing Syria, trying to get on with Putin, Trump is threatening the entire U.S. foreign policy establishment with what it fears most—irrelevance.

For if there is no war on, no war imminent, and no war wanted, what does a War Party do?

Buchanan is a writer, political commentator and presidential candidate. He is the author of Nixon’s White House Wars: The Battles That Made and Broke a President and Divided America Forever and previous titles including The Greatest Comeback: How Richard Nixon Rose From Defeat to Create the New Majority. Both are available from the AFP Online Store. 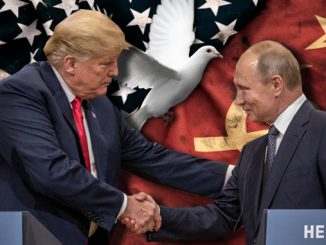 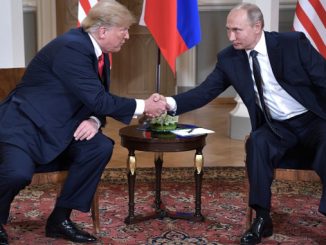