What happened to the Donald Trump who campaigned for president, the one who embraced an anti-interventionist foreign policy for the U.S. under a Trump administration? Whose path is he now following, and how have the warmongers gotten into his brain in just his first 100 days in office?

Has President Donald Trump outsourced foreign policy to the generals? So it would seem. Candidate Trump held out his hand to Vladimir Putin. He rejected further U.S. intervention in Syria other than to smash ISIS.

He spoke of getting out and staying out of the misbegotten Middle East wars into which Presidents Bush II and Obama had plunged the country.

President Trump’s seeming renunciation of an anti-interventionist foreign policy is the great surprise of the first 100 days, and the most ominous. For any new war could vitiate the Trump mandate and consume his presidency.

Trump no longer calls NATO “obsolete,” but moves U.S. troops toward Russia in the Baltic and eastern Balkans. Rex Tillerson, holder of Russia’s Order of Friendship, now warns that the U.S. will not lift sanctions on Russia until she gets out of Ukraine.

If Tillerson is not bluffing, that would rule out any rapprochement in the Trump presidency. For neither Putin, nor any successor, could surrender Crimea and survive.

When did Kiev’s claim to Crimea become more crucial to us than a cooperative relationship with a nuclear-armed Russia? In 1991, Bush I and Secretary of State James Baker thought the very idea of Ukraine’s independence was the product of a “suicidal nationalism.”

Where do we think this demonization of Putin and ostracism of Russia is going to lead?

To get Xi Jinping to help with our Pyongyang problem, Trump has dropped all talk of befriending Taiwan, backed off Tillerson’s warning to Beijing to vacate its fortified reefs in the South China Sea, and held out promises of major concessions to Beijing in future trade deals.

“I like (Xi Jinping) and I believe he likes me a lot,” Trump said this week. One recalls FDR admonishing Churchill, “I think I can personally handle Stalin better than . . . your Foreign Office. . . . Stalin hates the guts of all your people. He thinks he likes me better.”

FDR did not live to see what a fool Stalin had made of him.

Among the achievements celebrated in Trump’s first 100 days are the 59 cruise missiles launched at the Syrian airfield from which the gas attack on civilians allegedly came, and the dropping of the 22,000-pound “Mother of All Bombs” bomb in Afghanistan.

But what did these bombings accomplish?

The War Party seems again ascendant. Sens. John McCain (R-Ariz.) and Lindsey Graham (R-S.C.) are happy campers. In Afghanistan, the U.S. commander is calling for thousands more U.S. troops to assist the 8,500 still there, to stabilize an Afghan regime and army that is steadily losing ground to the Taliban.

Iran is back on the front burner. While Tillerson concedes that Tehran is in compliance with the 2015 nuclear deal, Trump says it is violating “the spirit of the agreement.”

How so? Says Tillerson, Iran is “destabilizing” the region, and threatening U.S. interests in Syria, Yemen, Iraq, and Lebanon.

But Iran is an ally of Syria and was invited in to help the UN-recognized government put down an insurrection that contains elements of al Qaeda and ISIS. It is we, the Turks, Saudis, and Gulf Arabs who have been backing the rebels seeking to overthrow the regime.

In Yemen, Houthi rebels overthrew and expelled a Saudi satrap. The bombing, blockading, and intervention with troops is being done by Saudi and Sunni Arabs, assisted by the U.S. Navy and Air Force.

It is we and the Saudis who are talking of closing the Yemeni port of Hodeida, which could bring on widespread starvation.

It was not Iran but the U.S. that invaded Iraq, overthrew the Baghdad regime, and occupied the country. It was not Iran that overthrew Col. Qadaffi and created the current disaster in Libya.

Monday, the USS Mahan fired a flare to warn off an Iranian patrol boat, 1,000 meters away. Supposedly, this was a provocation. But Iranian foreign minister Javad Zarif had a point when he tweeted: “Breaking: Our Navy operates in—yes, correct—the Persian Gulf, not the Gulf of Mexico. Question is what U.S. Navy doing 7,500 miles from home.”

Who is behind the seeming conversion of Trump to hawk?

The generals, Bibi Netanyahu, and the neocons, congressional hawks with Cold War mindsets, the Saudi royal family, and the Gulf Arabs—they are winning the battle for the president’s mind.

And their agenda for America?

We are to recognize that our true enemy in the Mideast is not al Qaeda or ISIS, but Shiite Iran and Hezbollah, Assad’s Syria, and his patron, Putin. And until Hezbollah is eviscerated, Assad is gone, and Iran is smashed the way we did Afghanistan, Iraq, and Yemen, the flowering of Middle East democracy that we all seek cannot truly begin.

But before President Trump proceeds along the path laid out for him by his generals, brave and patriotic men that they are, he should discover if any of them opposed any of the idiotic wars of the last 15 years, beginning with that greatest of strategic blunders—George Bush’s invasion of Iraq. 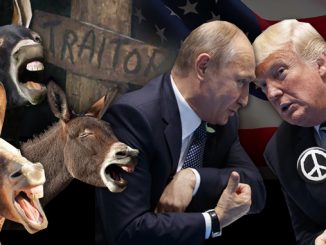 Trump Stands His Ground on Putin

Why the Electoral College Must Never Be Abolished

2 Comments on The Rise of the Generals