Not content to allow the Syrian war to wind down, the Pentagon and the CIA continue to escalate tension. Now, they’ve shot down a Syrian army jet bound for radical Islamic targets, which Russia declared an “act of war,” in the warmongers’ latest efforts to protect their creation, ISIS.

The United States has shot down a Syrian army jet on a mission to hit radical Islamic targets near Raqqa. To say that the U.S. is waging war against ISIS would be willful dishonesty. In truth, ISIS was the creation of U.S. and Israeli intelligence.

Russia’s deputy foreign minister rightly called the shooting down of the jet not only an “act of war” but also “support for terrorists.” This is something the Russian government has known for some time. As Russia makes plans to dump the dollar and as the present depression continues to wrack the U.S., the elite are demanding war.

The Russian Foreign Ministry warned that any planes interfering with the war on ISIS will be “intercepted“ by the Russian Air Force. This is the escalation the American ruling class wanted.

“In areas where Russian aviation is conducting combat missions in the Syrian skies, any flying objects, including jets and unmanned aerial vehicles of the international coalition discovered west of the Euphrates River will be followed by Russian air and ground defenses as air targets,” the Russian Defense Ministry announced.

There is a telephone line, a channel established between Russia and the U.S. in the case of any intensification of tension. Russia claims that this was not used prior to the incident. The U.S. denies this claim.

Ironically, the U.S. stated: “The Coalition’s mission is to defeat ISIS in Iraq and Syria. . . . The Coalition does not seek to fight the Syrian regime, Russia, or pro-regime forces partnered with them, but will not hesitate to defend Coalition or partner forces from any threat.”

No one can possibly believe this. The purpose of the attack was to defend ISIS, not defeat it. Whenever the Syrian Army liberates a town from ISIS, they find tons of Israeli and American weapons.

The U.S. military claims that the Syrian army plane was sent to attack the Kurdish Syrian Democratic Forces (SDF), a “moderate” group whose founding purpose was to make war on the Syrian government. Damascus claims the jet was headed toward an ISIS camp, one that the SDF was protecting.

The SDF allegedly seeks a “stable, secular” Syria, which is precisely what Syria was prior to the creation of this present war. American sponsorship of this Kurdish group deeply alienates Turkey, showing the continued disaster of U.S. Mideast policy.

It’s worth mentioning that most prisoners of war taken in this conflict by Russian or Syrian forces are not Syrians.

The SDF admitted its use of the banned white phosphorus shells in its operations against Damascus. The Russian military states that the purpose of the SDF is to act as a buffer between ISIS and the Syrian government, hindering Russian and Syrian forces.

In a recent interview with Le Figaro, Russian President Vladimir Putin stated about the U.S.: “Presidents come and go, but policy remains the same. Do you know why that is? Because the bureaucracy has too much power. A president is elected with new ideas. Then men in dark suits come and visit him. They tell him what to do.” This is the foundation of this reckless attack on Syria. Other, non-elected, forces have control over foreign policy.

On May 20 of this year, presidential spokesman Brett McGurk stated, “There is no government in Syria and we will never cooperate with the Assad regime.” Since the U.S. considers Assad illegitimate, any violation of Syrian sovereignty is warranted; anything goes. This is in contradiction to the military’s position stated above, because factions backed by the CIA are fighting factions backed by the Pentagon. The SDF is the Pentagon’s creation, called “our troops” by U.S. generals, while al Qaeda’s various offshoots are backed by the CIA. The larger question as to why the U.S. has authority to back any side in this war is a question few in the halls of power are asking.

This is why “self-defense” is the justification for the attack on the Syrian jet. Since these troops are essentially proxies of the Pentagon, it is considered no differently than if the warplane were going to attack Fort Leavenworth.

Recently, the Assad government was winding down this war, which in its seventh year has claimed more than 450,000 lives. Dissatisfied, however, both the CIA and Pentagon poured more money into these factions, making sure they had the resources to keep the war going.

Matthew Raphael Johnson, Ph.D. is originally from Union County, N.J. He completed his Ph.D. at the University of Nebraska, writing his dissertation on Michael Oakeshott’s critique of modernity. His first job out of college was working with The Barnes Review. He is a former professor of history at Mt. St. Mary’s University in Emmetsville, Md. Matt resides in Franklin County, Pa., where he teaches and writes on Russian history and politics. Matt’s latest books Russian Populist: The Political Thought of Vladimir Putin and The Third Rome: Holy Russia, Tsarism and Orthodoxy are available from TBR Book Club. Send payment with request to TBR. 16000 Trade Zone Avenue, Unit 406, Upper Marlboro, MD 20774. Order online at www.BarnesReview.com or call 1-877-773-9077 toll free to charge. 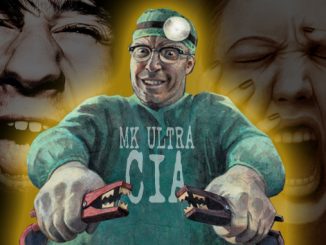 How the CIA’s MK-Ultra Ruined Their Lives