A Rasmussen poll last month showed that only one out of five Americans believes the official story of Jeffrey Epstein’s “suicide”: 52% say Epstein was murdered, and another 27% apparently think Epstein was secretly spirited out of prison in a body-swap scenario.

Though the vast majority rejects the fake news media reports of Epstein’s “suicide,” no mass movement for truth and justice has yet emerged. But that may change. Journalist Nick Bryant has started a petition entitled “Stop the cover-up. Demand justice for Jeffrey Epstein’s victims.”

Bryant, author of The Franklin Scandal, is one of the world’s leading investigative journalists on elite pedophile networks like Epstein’s. Three weeks prior to Epstein not hanging himself last August 10, the mainstream magazine Vanity Fair courageously published an article on Bryant’s decade-long Epstein investigation. It concluded with a prophetic quote from Nick Bryant: “It all depends on whether Epstein’s gonna talk or not. If Epstein talks, there’s gonna be a lot of powerful people who could go down.” Three weeks later, Epstein didn’t hang himself.

I recently interviewed Bryant about his efforts to launch a bipartisan movement to expose the pedophile blackmail rings that have a stranglehold (no pun intended) on our national politics.*

Bryant explained that political blackmail dates back to the beginning of the American republic. He cites James Callender, a scandal-mongering journalist who had dug up dirt on Thomas Jefferson’s political enemies including Alexander Hamilton and John Adams. After President Jefferson rejected Callender’s demand for appointment as a postmaster, Callender exposed Jefferson’s alleged affair with slave Sally Hemmings.

Perhaps America’s best-known master blackmailer was J. Edgar Hoover, the closeted homosexual who headed the FBI for nearly five decades. Hoover was able to remain FBI director as long as he wished—until Nixon’s henchmen finally poisoned his toothpaste—thanks to his “Official and Confidential” files on most of the top politicians, judges, and law enforcement officers in America. Meanwhile, Hoover himself was being blackmailed by the head of all organized crime in the Western Hemisphere, Meyer Lansky, a close friend of Israel.

It has been estimated that as much as one-third, perhaps even 50% or more, of our senators and representatives are being blackmailed by intelligence agency-linked criminal networks. These blackmail rings typically pimp children to the politicians, film the proceedings, and thereby achieve total control over the blackmailed individuals—and near-total control over our national political life.

The classic case of a pedophile blackmail ring is the Franklin scandal. Nick Bryant describes it as “a child trafficking network that was operational in the 1980s.”

It flew kids from coast to coast for about 10 or 15 years, and it destroyed the lives of untold numbers of children. It was ultimately a blackmail operation like Epstein was running. A lot of the flight or passenger manifests of Lawrence King that I acquired—he was one of the primary pimps—go to Washington, D.C. King would rent Lear jets and fly a bunch of kids to Washington, D.C. for Craig Spence, who was the other pimp. And Craig Spence had a house that was wired for audio-visual blackmail, much like we see with Epstein.

The Franklin perpetrators went unpunished, but the Epstein network perpetrators, including such notables as Bill Clinton, Alan Dershowitz, and Prince Andrew, are still in legal jeopardy—if Americans get off their rear ends and demand justice. Bryant explains: “A New York Times article on August 29, 2019 named six procurers of Jeffrey Epstein’s—and none of them have been indicted! If there was a real investigation going on, those procurers would be indicted on multiple counts of child trafficking. And then they’d roll over on the perpetrators to get time chipped off their sentences. But that’s not happening, so I’m trying to partner with anti-trafficking networks right now to form a coalition so we can show that the Department of Justice is covering up child abuse.”

Bryant concludes: “This is an issue that should be bipartisan: the child abuse cover-up. So hopefully we can get people out in the streets expressing their outrage. That’s what we really need. And I think we might be able to get something done. If there is an actual investigation into Jeffrey Epstein, a lot of dominoes would fall.”

*Interested readers can listen to the entire interview to be found at www.patreon.com/posts/34435429. We also recommend you read Bryant’s The Franklin Scandal and watch the film “Conspiracy of Silence.” 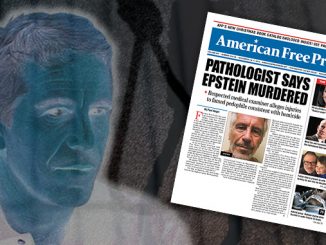