The Democrats just can’t seem to give up on the Russian fairy tale, determined to believe President Trump is guilty of “collusion” with Russia, but the real story involves Hillary’s meddling. Now a new foreign connection has emerged. Ukraine top prosecutor has said he’s investigating a tape recording that was released, which “allegedly revealed a top law enforcement official admitting his agency had leaked the records in order to help Clinton’s campaign.”

When the findings of special counsel Robert Mueller were finally announced in late March, those who had been trumpeting “collusion” fanatically didn’t take it very well. Mueller found absolutely no evidence of any “collusion” between the Trump campaign and Russia. An exuberant Donald Trump called it “complete and total exoneration.”

Democrats and anti-Trump celebrities were almost apoplectic in their reactions. Cher tweeted, “I Have Not, Nor Will I Change My Opinion Of trump, His Evil, Or His Ties To Russia. He Is up to his Neck in Crime & Corruption.” Comedian Chelsea Handler, tasteful as always, tweeted, “I will admit my feelings for Mueller are conflicted now and my sexual attraction to him is in peril, but I still believe there is a lot more to come, and we must all march in the streets if we don’t see that report.”

This quickly became the new mantra, with cries of, “Release the full report,” emanating from every corner of the establishment. Comedian Sarah Silverman, clinging to Russian fantasies like so many others, urged Trump to “focus on finding, disabling and punishing those who worked for Russia to attack the U.S. election.”

While the world’s unlikeliest conspiracy theory retreated into the background, another possible foreign connection to the 2016 presidential election emerged.

Ukraine’s top prosecutor, Gen. Yuriy Lutsenko, told “Hill TV” last week that he has begun investigating whether his country’s law enforcement apparatus purposefully leaked financial records about recently convicted former Trump campaign chairman Paul Manafort during the 2016 campaign, in an effort to assist Hillary Clinton. Lutsenko was prompted by the release of a tape recording that allegedly revealed a top law enforcement official admitting his agency had leaked the records in order to help Clinton’s campaign. This leaking of what was dubbed “the black ledger” resulted in Manafort’s resignation from Trump’s campaign and became a key allegation in the Russian “collusion” probe that went on for over two years.

The Ukrainian parliamentarian who released the recording secured a court ruling that the leak constituted “an illegal intrusion into the American election campaign.” Lutsenko told The Hill, “Today we will launch a criminal investigation about this and we will give legal assessment of this information.” Many believe that the infamous Russian dossier obtained by retired British spy Christopher Steele began when he discussed securing evidence against Manafort with top Justice Department officials.

Lutsenko also told The Hill that the Obama-era U.S. embassy had interfered in his efforts to prosecute corruption cases in 2016. He stated that the U.S. ambassador had given him a list of defendants that he would not be allowed to pursue and also refused to cooperate in an investigation into whether U.S. aid had been misappropriated in Ukraine. The State Department quickly issued a statement that it no longer financially supports Lutsenko’s office in its anticorruption mission and called his allegation about the do-not-prosecute list “an outright fabrication.” Rep. Pete Sessions seemed to corroborate Lutsenko, writing in a private letter to Secretary of State Mike Pompeo that he should recall the current U.S. ambassador, claiming that she’d made disparaging comments about Trump.

Mueller’s findings of “no collusion” make even more laughable all the endless reports by the mainstream media that such connections were real and treasonous. MSNBC’s Joe Scarborough claimed the media had nothing to apologize for, and declared, “What would you have had the media do over the past two years when Donald Trump lied throughout the 2016 campaign about his contacts with Russia?”

Rep. Adam Schiff (D-Calif.), one of Trump’s most vocal critics in Congress, steadfastly clung to the narrative and ignored Republican demands for his resignation.

Trump himself told “Fox News”: “[Schiff] should be forced out of office. He is a disgrace to our country.”

While Democrats clamored for the release of the full Mueller report in desperate hopes of some hidden impeachable offense, Trump announced his intention to release classified FBI documents used to launch the investigation into Russian election interference.

Attorney General William Barr told Congress: “The investigation did not establish that members of the Trump campaign conspired or coordinated with the Russian government in its election interference activities.”

When the report is eventually released, it is bound to have the prerequisite redactions, which will in turn bolster theories that meaty evidence is being covered up. Barr, one of Trump’s countless veteran Deep State appointees, clung to the fanciful notion that Russia did interfere, just not in cahoots with the Trump campaign.

WikiLeaks editor-in-chief Kristinn Hrafnsson summed things up nicely, telling RT: “I have no idea how the mainstream media, who were most active in this Russiagate frenzy, will recover. I simply don’t see that happening. In a normal world, a lot of journalists would be emptying their desks today.” 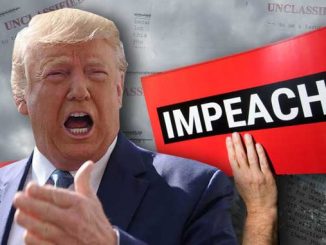