Much to the Deep State’s chagrin, two years of intense investigation have turned up nothing to warrant ousting Trump.

The same mainstream media that has scoffed at any and all “conspiracy theories” that expose establishment crimes and corruption fell utterly in love with the notion that Russian officials colluded with the Trump campaign to sway the 2016 presidential election. All of the major press outlets—from The New York Times to The Washington Post to supposedly “cutting-edge” Rolling Stone magazine—have provided identical timelines of the fictitious scandal.

In a Feb. 12 story ringing with disappointment, NBC News admitted, “Democrats and other Trump opponents have long believed that special counsel Robert Mueller and congressional investigators would unearth new and more explosive evidence of Trump campaign coordination with Russians. Mueller may yet do so, although Justice Department and congressional sources say they believe that he, too, is close to wrapping up his investigation.” Those pushing the fanciful Russian “collusion” theory include America’s long-discredited intelligence agencies. These agencies have nonsensically suggested that what began as a conspiracy to sow chaos morphed into a plot that somehow engineered Trump’s victory.

Mueller’s two-year-old investigation has been soundly criticized, especially by those who recall his ugly connections to previous government crimes and coverups, including the events of 9/11. USA Today even recognized the futility of what Trump and others have called Mueller’s “witch hunt” with a recent headline reading “Robert Mueller Has Spent Two Years Investigating Trump, and He Hasn’t Said a Word. It’s Possible He Never Will.”

“A public narrative has built an expectation that the special counsel will explain his conclusions, but I think that expectation may be seriously misplaced,” explained John Pistole, Mueller’s longtime top deputy at the FBI. “That’s not what the rules provide, and I really don’t see him straying from the mission. That’s not who he is.”

For those with short memories, the Russian “collusion” scenario was born out of the very real conspiracy by the Democratic National Committee (DNC) to rob Bernie Sanders of the party presidential nomination, in favor of Deep State favorite Hillary Clinton. WikiLeaks released DNC emails that demonstrated this clearly. Julian Assange all but named young DNC staffer Seth Rich as the one who leaked these emails. Rich was murdered on July 10, 2016 in Washington, D.C. There was no apparent motive, and no one in the mainstream media or our two-party system has the least bit of interest in solving the crime. When Sean Hannity aired a broadcast in 2017 that gingerly raised some troubling questions about the case, the establishment did everything but get Hannity fired. Even though Fox News dutifully retracted the story, the family of Rich was so irate it launched a lawsuit against Fox News. The main source of their indignation was the very suggestion that Rich had exchanged emails with Assange and had been the source of the DNC leaks. Apparently, Rich’s loved ones are satisfied with the findings of the Washington, D.C. police department, that he was the victim of a random robbery attempt—during which he wasn’t robbed.

While there is never likely to appear any evidence of the Deep State’s Russian “collusion” fantasy, there is much to suggest a conspiracy by those attempting to bring down Trump by any means necessary. According to the news site “Axios.com,” “They [GOP House members] allege that [former Associate Deputy Attorney General] Bruce Ohr played an improper intermediary role between the Justice Department, British spy Christopher Steele, and Fusion GPS—the opposition research firm that produced the Trump-Russia dossier, funded by Democrats.” Ohr’s wife worked for Fusion GPS and helped compile the infamous Steele dossier, and Ohr’s failure to include this information about his wife’s employment on federal conflict-of-interest forms is itself a violation of federal law. GPS Fusion is known to have been funded by Mrs. Clinton, and Mueller’s top operative Andrew Weissmann was aware of all these troubling connections.

The Steele dossier was where one of the most bizarre, least credible allegations against Trump sprang from, that the Russian government had taped Trump watching Russian prostitutes urinating on a Moscow bed in 2013. Former FBI Director James Comey seemed entirely open to this possibility in his book last year, and told ABC News, “I honestly never thought these words would come out of my mouth, but I don’t know whether the current president of the United States was with prostitutes peeing on each other in Moscow in 2013. It’s possible, but I don’t know.”

In September 2018, an anonymous White House official wrote an infamous op-ed published in The New York Times, with the sensational heading, “I Am Part of the Resistance Inside the Trump Administration: I work for the president but like-minded colleagues and I have vowed to thwart parts of his agenda and his worst inclinations.”

The Times explained to its readers: “The Times is taking the rare step of publishing an anonymous op-ed essay. We have done so at the request of the author, a senior official in the Trump administration whose identity is known to us and whose job would be jeopardized by its disclosure.” The op-ed referred to Trump’s “misguided impulses.” Speculation ran high about the identity of this “senior official,” with many suspecting it was none other than Vice President Mike Pence.

In late February, former Acting FBI Director Andrew McCabe told CBS News that Deputy Attorney General Rod Rosenstein had raised the possibility of invoking the 25th Amendment to remove Trump from office, after he fired Comey. McCabe also revealed that he had ordered an investigation into whether Trump had obstructed justice in alleged attempts to block inquiries into Russian election meddling. McCabe claimed Rosenstein was “counting votes or possible votes” of cabinet members he felt might support the removal of the president. A few months back, CNN had reported that Rosenstein discussed wearing a wire to record conversations with Trump, and The New York Times reported that an anonymous “senior official” in the Trump administration had spoken about “early whispers within the cabinet of invoking the 25th Amendment.” Trump called McCabe a “disgrace” and accused him of having “no credibility.” McCabe is the author of the new book The Threat: How the FBI Protects America in the Age of Terror and Trump.

There is a long history of electoral fraud in America, but none of it has been coordinated by Russians. The supposed “collusion” between Trump and Russia appears to be a rare establishment-fueled conspiracy theory, promulgated to deflect attention away from our very real, homegrown corruption. 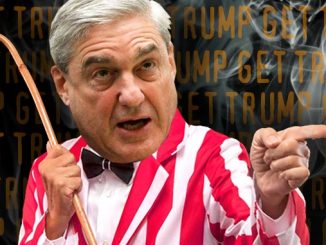