News that the top dog at the Disabled American Veterans makes $600,000, astoundingly double what he made in 2011, has veterans angry.  With so many veterans living paycheck to paycheck and tens of thousands more living on the streets, an organization focused on helping disabled veterans get the VA support they’re due should prioritize its funding with those veterans in mind.

When this reporter was summarily tossed out of the veterans’ charity, the Disabled American Veterans (DAV), in February 2014 for shining a light on the ungodly sums the officers of that 501(c)(4) organization were paying themselves, it seemed beyond reason that their incomes could climb much higher. Last month, however, when the DAV’s Internal Revenue Service Form 990 for 2016 was released on the organization’s website, the quaint belief that somehow greed could be contained was shown the door. In five short years, since this newspaper first analyzed DAV’s 2011 Form 990, the “leader” of that organization saw his income more than double, from $263,185 to $527,292.

Incredibly, a portion of his income, $225,450—over 40%—was classified as “retirement and other deferred compensation,” and is not taxed. In other words, while most Americans—especially disabled veterans—are living paycheck to paycheck, DAV’s head is paid so much that almost half of that income can be set aside for retirement and is not needed today.

Other highly compensated individuals employed by the charity also saw huge hikes in their pay over that same time period, though nowhere near what the top dog, Mississippi-born J. Marc Burgess, brought home. His pay is even more striking given the fact that the charity didn’t have such a great year: It brought in around $2 million less than the year before and still managed to lose around $12 million, that is, revenues less expenses. Never mind the fact that on any given night, there are tens of thousands of veterans who call the street their home.

The 1.3 million-member DAV, founded in 1920 to help disabled veterans of the U.S. armed forces— returning from World War I—and their families adapt to living with physical and mental disabilities, is chartered by Congress and headquartered in Cold Spring, Ky.

Every state in the union has a DAV department, including Washington, D.C. and Puerto Rico, and each of those has chapters associated with it. Currently, there are approximately 1,300 chapters across the country. The primary function of the DAV has been to serve as a veteran’s advocate for filing Veterans Administration (VA) disability claims.

Listen to AFP’s exclusive interview with Stephen I. Marcus, a former DAV member:

American Free Press interviewed 75-year-old, 100% disabled American veteran Steven I. Marcus, a former member of the DAV, for his views on the 2016 Form 990.

“I have a lot of friends who are active members of the DAV,” he began, “but on the local level, and they do good work in the local community with the veterans. But at the very top of the DAV, to me, they’re all bloodsuckers; they’re self-serving. They fly an airplane and they get guys like that actor, Danny Aiello, [who] goes on television. When I ran into Danny, because he doesn’t live that far from me, I told him, ‘You know, Danny, I love you as an actor, but somebody’s giving you bad news, because the Disabled American Veterans is a rip-off.’ ”

Marcus touched on the ongoing scandalous tragedy of veterans dying on VA waiting lists for healthcare while the DAV feeds at the gilded trough.

“These bloodsuckers take money; they fly a plane all over the country,” he bemoaned. “What the hell does that do for the disabled American veterans when guys wait in line and die? I think 20 veterans a day die waiting in line at the VA.”

Marcus commented upon the fact that so many veterans are homeless in this once-great nation, while organizations like the DAV never seem to tire of enriching themselves. “It’s totally disgraceful that we do this, really and truly,” he said.

“These are people, patriots, who served the country honorably. Remember, when we raised our right hand, we swore to uphold the Constitution, and if necessary we would give our life for our country. But at the same time we expected that if we got hurt we’d be taken care of. And they’re not being taken care of. It’s a disgrace.”

Marcus directed his criticism at those who are at the top of the DAV.

“These people are self-serving; all they’re interested in is money,” Marcus continued. “If you [want to] help veterans, why don’t you give back all your money, and give it to the veterans who need the help?”

AFP asked Mr. Marcus to reflect on the fact that Burgess’s annual income has not only exceeded that of the president of the United States but should surpass the $1 million mark in a few years.

“If I sound sarcastic, I am,” he said. “If I sound bitter, I am. I don’t even want to admit anymore that I belonged to the DAV at one time. As far as I’m concerned, the only thing disabled about them is their ability to take care of the people.”

Dave Gahary, a former submariner in the U.S. Navy, prevailed in a suit brought by the New York Stock Exchange in an attempt to silence him. Dave is the producer of an upcoming full-length feature film about the attack on the USS Liberty. See erasingtheliberty.com  for more information and to get the new book on which the movie will be based, Erasing the Liberty. 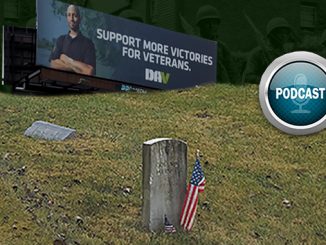