The world’s largest veterans charity, previously reported on in AFP, is now condoning the desecration of a cemetery in St. Louis, Mo. How does advertising on a billboard placed directly above a veteran’s grave honor those who gave their lives for our country?

The Disabled American Veterans (DAV), the veteran charity exclusively covered by American Free Press for the exorbitant incomes of its officers, is back in the news again, this time for desecrating an all-black cemetery in St. Louis, Mo.

The story was brought to the attention of this newspaper by Wanda Brandon, who began a campaign to honor the dead in their final resting place, in the hopes of bringing this matter to the national stage.

“I launched a campaign about the cemetery, which is Washington Park Cemetery,” Ms. Brandon told this reporter. “It’s located in St. Louis County in the city of Berkeley, which is a suburb right outside of St. Louis.”

Founded in 1920, the cemetery has a sordid past of abuse, and the latest insult to those interred there may be just what’s needed to draw attention to this matter.

“I have several family members that are buried in the cemetery,” she said, “and I have some that have been disinterred from the cemetery. There’s a long history with this cemetery of neglect and abuse and desecration.” 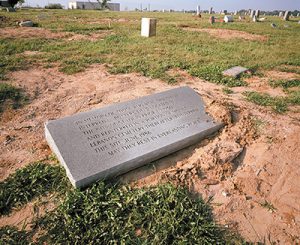 In the late 1950s, the Interstate Highway System took land from the cemetery to run Interstate 70, and split the cemetery in half, with the land on the northern side of I-70 adjacent to St. Louis Lambert International Airport, Missouri’s biggest and busiest airport.

In 1986, then-owner Virginia L. Younger leased some of the cemetery’s land to DDI Media, a St. Louis-based billboard company with over 1,000 billboards across the country. The sale brought some much-needed attention on the cemetery.

“Under scrutiny by county and state investigators,” and dogged by civil lawsuits by those whose loved ones’ graves could not be located, Missouri’s attorney general opened up their own investigation in January 1991. That same month, Ms. Younger put a gun to her chest, writing on one of her four suicide notes that she was “tired of being persecuted.” 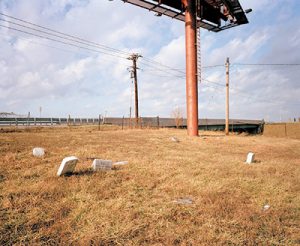 “Virginia Younger allowed billboards and cell phone towers to come into the cemetery before she killed herself,” explained Ms. Brandon.

To add insult to injury to the cemetery, in the early 1990s, the city of St. Louis brought light rail transportation in and used eminent domain to further encroach on the land.

“After that,” she explained, “they disinterred well over 10,000 people from their final resting places, to run the trains to the airport.”

Early in 2017, Ms. Brandon had had enough and founded the Washington Park Cemetery Anti-Desecration League. Armed with an official organization standing behind her, she set about on her mission.

In July of that year, however, she was told by DDI Media that the company was not going to remove its billboards from the cemetery.

“So that’s when I decided to launch a campaign against the billboard company,” she said. Her organization made a video, and in January 2018, the local press took notice and wrote their first story in May of that year. 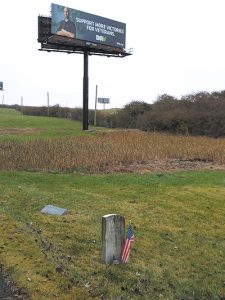 When even that didn’t stop DDI, Wanda moved on to plan B.

“On October 30, 2018, myself and other members of my organization began to contact the companies on the billboard, to notify them where the billboard was located,” she explained. “And every last company had no clue that their billboard was inside of the cemetery sitting on top of graves.”

They all agreed to pull out their stakes except for the DAV and one other company. Ironically, there is a veteran buried right under the billboard DAV is advertising on. Ms. Brandon reached out to that veteran’s family, who contacted the DAV with no luck.

“I contacted the DAV’s headquarters in Kentucky, and I received an email eventually back from them, saying, in short, that they felt it was an honor to have their billboard inside of the cemetery.”

Undeterred, Ms. Brandon reached out to the DAV in Washington, specifically the group’s top dog, J. Marc Burgess, who “earned” $550,524 as the head of a veteran’s charity in 2017.

“He was supposed to get in contact with me,” she explained. “I never heard from him. I got a call back from his administrative assistant, and she asked for my address [and said] that they wanted to send me a letter.”

She received a certified letter on Christmas Eve from the DAV commander, singing the same tune as the email she received, that the cemetery should be honored that the DAV is dancing on the gravestones. 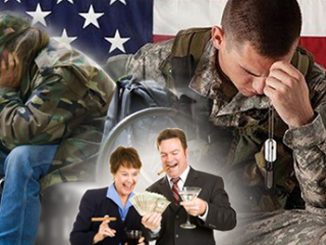