Famed civil rights leader Rev. Martin Luther King Jr. and many in his organization were leery of the upstart Jesse Jackson, who they saw as race baiting and conflict driven. In addition, everyone else at the SCLC was a minister. Jackson’s unenthusiastic and short-lived attendance at seminary made clear he was not interested in pastoring a flock, yet he found a way to work the system and put the “Rev.” in front of his name. Surely worst, however, in Jackson’s never-ending pursuit of self-promotion was his callous disregard for Dr. King’s honor at the time of his assassination.

This April marks the 50th anniversary of the assassination of Rev. Dr. Martin Luther King Jr. Memorials will be held, scholarships will be dedicated, legislative resolutions will be passed, books will be published, and documentaries will be released. The tragic events of April 1968 included both the killing of King and the false blame attributed to James Earl Ray. Many may have forgotten that King’s death also marked the dubious rise of “Reverend” Jesse Jackson.

King had accepted an invitation to speak at the church of Rev. Clay Evans on the south side of Chicago in 1966, where Jackson, having met King in Selma, Ala. in 1965 and always one to seize an opportunity, pushed himself closer to King throughout the visit. He picked King up at the airport and hobnobbed with his team enough to earn a staff job and an annual salary of $3,000 from the King organization.

Despite his official inclusion on King’s staff, King soon found himself unimpressed with aspects of Jackson’s personality. He was especially troubled with Jackson’s reflexive ability to escalate encounters with government officials, police departments, and innocent bystanders.

No matter how hard Jackson may have worked to get to the front of the line of luminaries within the late 1960s civil rights movement, he lacked one thing that King’s closest confidants possessed: Jackson wasn’t a man of the cloth.

“Dr. King told Jesse that everybody who worked in the movement was a minister,” said Hurley Green, a former speechwriter, columnist, and friend of Jackson, “so Jesse went to seminary for six months, dropped out, and called himself a minister.”

Jackson’s limited time spent at the Chicago Theological Seminary (CTS) was verified by Chaplain A. Knighton Stanley, who stated that Jackson was not committed to the church nor had he discovered a true vocation. Jackson had even failed to fulfill the required class on sermon writing and delivery that one would think would be important for someone truly interested in the ministry and communicating with his flock.

Jackson later clarified why he attended CTS for the time that he did. “I decided to go to seminary to learn how to do without the law to change society, to change it in deeper ways,” he said.

The distrust and exasperation King had with Jackson continued through 1968. In Memphis, one week before the assassination, King made a decision to cancel participation in a demonstration that he believed could turn violent. Jackson, in front of King and the Southern Christian Leadership Conference (SCLC) staff, boisterously disagreed with King’s cancellation of the march.

Angry at Jackson’s response, King walked out of the meeting. The team neared the breaking point with Jackson as they, as Timmerman wrote, “mistrusted his ambition, his audacity, and his refusal to be a team player.” They could have never imagined the depths to which Jackson would sink a week later. 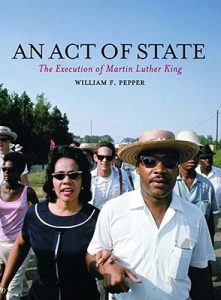 An Act of State: The Execution of Martin Luther King, by William F. Pepper: On April 4, 1968, Martin Luther King was in Memphis supporting a worker strike. By nightfall, army snipers were in position, military officers were on a nearby roof with cameras, and Lloyd Jowers had been paid to remove the gun after the fatal shot was fired. When the dust had settled, King had been hit and a clean-up operation was set in motion—James Earl Ray was framed, the crime scene was destroyed, and witnesses were killed. William Pepper, attorney and friend of King, has conducted a 30-year investigation into his assassination. In 1999, Lloyd Jowers and other co-conspirators were brought to trial in a civil action suit on behalf of the King family. Seventy witnesses set out the details of a conspiracy that involved J. Edgar Hoover and the FBI, Richard Helms and the CIA, the military, Memphis police, and organized crime. The jury took an hour to find for the King family. In An Act of State, you finally have the truth before you—how the U.S. government shut down a movement for social change by stopping its leader dead in his tracks. Get the updated version of William F. Pepper’s tour de force (softcover, 350 pages, $22 plus $4 S&H inside the U.S.) from the AFP Online Store.

As King lay dying on the balcony of the Lorraine Motel, Jackson claims—and has claimed since 1968—that he was the last to speak to King and cradled King’s head as he died. Jackson then appeared on Chicago television the next day, wearing a bloody turtleneck that he said was stained with the blood of the fallen civil rights leader. King associates have always challenged Jackson’s self-described role on that day as fabricated and distasteful. Jackson, in reality, was in the parking lot below. Critics also claim that Jackson went so far as to wipe King’s blood on his shirt for the sole purpose of going on television to build his own legend.

After King’s death, the leadership of the SCLC fell into the hands of MLK’s chosen successor, Ralph Abernathy. Jackson almost immediately clashed with Abernathy, about whom Jackson famously exclaimed to biographer Eddie Stone, “I never listen to that ni**er!”

Abernathy isn’t the only civil rights leader to incur the wrath of Jackson’s ambition. There have also been conflicts with Minister Louis Farrakhan, Rev. Al Sharpton, and former Atlanta mayor Andrew Young. If anyone challenged Jackson’s stranglehold on the role of civil rights media darling and ace pundit, Jackson viewed them as a threat.

Jackson did eventually become a minister, of sorts. CTS offered him a master’s degree in divinity in 2000. The only requirement for such was that he engage in a two-hour discussion with a professor on the topics of abortion and the death penalty. Sitting on the board of CTS in 2000 was Jesse Jackson Jr., the young Democratic member of Congress.

Jackson had used the title of “Reverend” since his early days as a community organizer, even without an education in theology. He rose to stardom on the basis of a history with Dr. King that was contentious and in many cases untrue. He stayed in power by extorting companies out of donations with race-based threats. And he has built an enemies list—white, black, and international—as long as anyone in contemporary American history. He keeps hope alive that his legacy will someday find itself parallel to King’s, yet like his coalition, his greatest dreams may only be found somewhere over the rainbow.

S.T. Patrick holds degrees in both journalism and social studies education. He spent ten years as an educator and now hosts the “Midnight Writer News” Show. His email is [email protected].