Despite the Founding Fathers’ admonition to enter “entangling alliances” with no foreign nations, “the U.S. has strangled itself in a cat’s cradle of entangling alliances,” says Kevin Barrett. As a result, the nation is mired in a series of wars for the benefit of one of those allied nations—Israel, which continues to pressure the U.S. to expand our wars into Iran. Given how quickly and how often those who took an oath to defend the Constitution instead defend an entangling alliance, the question is: “When will the traitors at home stop inciting treason abroad?”

Thomas Jefferson’s foreign policy doctrine—restating the key line from George Washington’s farewell speech—was simple and sensible: “Peace, commerce, and honest friendship with all nations—entangling alliances with none.” The Founding Fathers’ credo held sway until World War II. Since then, the U.S. has strangled itself in a cat’s cradle of entangling alliances. Worse, it has allowed one of those alliances, the unofficial one with Israel, to drag it into a series of disastrous Middle Eastern wars.

The American agents of Israel who helped orchestrate 9/11 are guilty of treason, which is defined in the Constitution as “levying war against the United States.” They blew up the World Trade Center and bombed the Pentagon in order to trick the U.S. into attacking Israel’s regional enemies: the “seven countries in five years” mentioned by Gen. Wesley Clark, who has cited a neocon memo suggesting that the purpose of 9/11 was “to take out seven countries in five years, starting with Iraq, and then Syria, Lebanon, Libya, Somalia, Sudan and, finishing off, Iran.”

In order to “take out” those countries the neocon-run post-9/11 United States has had to work closely with the relatively small number of Iraqis, Syrians, Lebanese, Libyans, Somalis, Sudanese, and Iranians who are willing to commit treason against their own nations. Iraq, Syria, Libya, Somalia, and Sudan have been effectively destroyed by American agents of Israel and their bought-and-paid-for local traitors. Lebanon and Iran are next in their gunsights.

But Tehran is putting up a stiff fight. Since 1979 Iran has managed to persist as the Middle East’s only fully independent country, only genuine democracy, and most formidable opponent of Israel.

Israel, which has ethnically cleansed the majority of its rightful voters, is neither a democracy nor a legitimate nation. Though its creation was recommended by the UN General Assembly, it was never implemented by the Security Council. Israel has violated dozens of UN resolutions thereby eliminating any possible claim to legitimacy.

More than three times the size of Iraq, Iran boasts a population of 80 million. When under attack, Iranians will unite and put their lives on the line for their country, as they proved during the 1980s war with Saddam Hussein’s Iraq. Currently Iran boasts many strategic advantages including thousands of the latest and most lethal anti-ship missiles, which are dug deeply into the mountainous terrain overlooking the Persian Gulf. Using those missiles, Iran can sink all U.S. ships in the Gulf and shut down 20% of the world’s oil supply, inducing a catastrophic global depression.

A December 2004 Atlantic article reported on a series of war games simulating a U.S.-Iran conflict. The result was simple: “You have no military solution for the issues of Iran,” according to lead participant Sam Gardiner.

Yet pro-Israel traitors in the U.S. government continue plotting to destroy Iran. According to neoliberal Zionist Thomas Friedman of The New York Times, the U.S. has given Israel the green light to launch another huge war on Lebanon, with the aim of expanding the war to Iran.

This “U.S. green light,” of course, was actually given not by actual patriotic Americans but by Israel’s neocon agents.

Meanwhile the mainstream American media, also dominated by Zionists, relentlessly tries to stir up sedition in Iran. The minuscule minority of Iranians who are actively opposed to their nation’s Islamic republican constitution are given grotesquely disproportionate, fawningly favorable coverage, while ordinary Iranians, who protest over economic issues and corruption but would die to defend their nation and its constitution, are ignored.

Iraqi traitors like the swindler Ahmed Chalabi helped the neocons murder more than a million of his countrymen and destroy his country as a modern, technologically advanced society. Somali traitors cooperated with the U.S.-Israeli-orchestrated Ethiopian invasion, occupation, and destruction of that nation. Sudanese traitors helped the neocons orchestrate the vivisection of their country, including the amputation of the resource-rich south, which is now occupied by Israel and its friends. Libyan traitors helped Hillary Clinton and her Zionist controllers destroy that country, which formerly featured the highest living standards in Africa. Syrian traitors assisted in the destruction of that nation by an Israel-orchestrated, U.S.-assisted ISIS rampage.

Are there enough traitors in Iran to force “regime change”? No chance. They all fled with the Shah in 1979 and are now living side-by-side with their Zionist friends in the rich neighborhoods of Los Angeles. Some of them dream of returning to help overthrow the Islamic Republic. But the Iranian people will have none of it. The 2009 “Green Revolution” fizzled, as did recent CIA-Mossad attempts to hijack legitimate demonstrations and turn them into riots.

When will the traitors at home stop inciting treason abroad? When we arrest, try, and sentence them for their crimes, starting with 9/11. 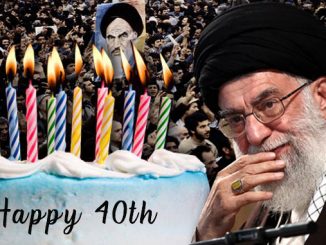