When President Trump’s own appointees publicly disrespect and contradict him, does the president of the United States have any power whatsoever? And, why has he not yet simply said, “You’re fired!”? It would appear the deep state completely controls him, to the detriment of the entire world.

President Trump Has Been Contradicted by His Own Government, Which Has Lined Up Against Him in Favor of Hillary Clinton, the Democratic National Committee, and the Russophobic Presstitute Media that serves the military/security complex and the neoconservatives.

I am afraid that The Saker and Finian Cunningham are correct. Nothing can come of Trump’s meeting with Putin, because, as Cunningham puts it: “Trump doesn’t have freedom or real power. The real power brokers in the U.S. will ensure that the Russophobia campaign continues, with more spurious allegations of Moscow interfering to subvert Western democracies. Trump will continue to live under a cloud of media-driven suspicions. And thus the agenda of regime change against Syria and confrontation with Russia will also continue. Trump’s personal opinions on these matters and towards Vladimir Putin are negligible—indeed dispensable by the deep powers-that-be.”

Cunningham points out that instead of lauding the meeting as the beginning of the process to defuse the high tensions between the two major nuclear powers, the U.S. media denounced Trump for being civil to Putin in the meeting.

What is missing from the media in the entirety of the Western world and perhaps also in Russia is the awareness that the dangerous tensions are orchestrated not only by Hillary and the Democratic National Committee, the neoconservatives, the U.S. military/security complex, and the presstitutes, but also by President Trump’s own appointees.

Trump’s own ambassador to the UN, Nikki Haley, and Trump’s own Secretary of State, Rex Tillerson, sound exactly like Hillary Clinton, the Democratic National Committee, the neoconservatives, The Washington Post, The New York Times, CNN, and the rest of the totally discredited presstitute media that is committed to raising tensions between the U.S. and Russia to the point of nuclear war.

On the same day that President Donald Trump said, “It is time to move forward in working constructively with Russia,” and the day after he said, “I had a tremendous meeting yesterday with President Putin,” the ignorant, stupid Nikki Haley, who Trump appointed as U.S. UN Ambassador, publicly contradicted her president, forcefully stating: “We can’t trust Russia and we won’t ever trust Russia.”

The ignorant, stupid Haley is still in office, a perfect demonstration of Trump’s powerlessness.

The ignorant, stupid Haley has gone far beyond Obama’s crazed UN Ambassador, neocon Samantha Power, in doing everything in her power to ruin the prospect of normal relations between the two major nuclear powers. Why does Nikki Haley work in favor of a confrontation between nuclear powers that would destroy all life on Earth? What is wrong with Nikki Haley? Is she demented? Has she lost her mind, assuming she ever had one?

How can President Trump normalize relations with Russia when every one of his appointees wants to worsen the relations to the point of nuclear war?

Joining Nikki Haley was Trump’s Secretary of State, Rex Tillerson. Tillerson, allegedly a friend of Russia, is also working overtime to worsen relations between the two nuclear powers by publicly contradicting the president of the United States, thereby making it clear that Trump is barely even a cipher. Tillerson, a disgrace, said that Putin’s refusal to admit that Putin elected Trump by interfering in the U.S. election “stands as an obstacle to our ability to improve the relationship between the U.S. and Russia and it needs to be addressed in terms of how we assure the American people that interference into our elections will not occur by Russia or anyone else.”

Trump’s incompetence is illustrated by his appointments. There is no one in “his” government that supports him. Every one of them works to undermine him. And he sits there and Twitters.

So, what is President Putin’s belief that an understanding can now be worked out with Washington worth? Not a plugged nickel. Trump has zero authority over “his” government. He can be contradicted at will by his own appointees. The president of the United States is a joke. You can find him on Twitter, but nowhere else, not in the Oval Office making foreign or military policy. The president Twitters and thinks that is policy. 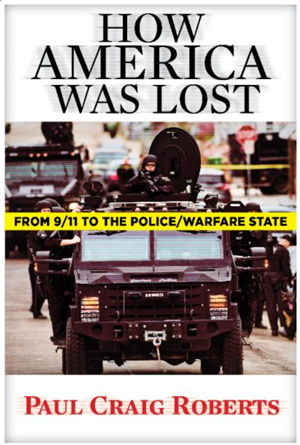 The Trump administration was destroyed when the weak Donald Trump allowed the neoconservatives to remove his National Security Advisor, General Flynn. Trump has never recovered. “His” administration is staffed with violent Russophobes. Wars can be the only outcome.

We know two things about the alleged Russian interference in the Trump/Hillary presidential election. One is that John Brennan, Obama’s CIA director, and Comey, Obama’s FBI director, implied repeatedly that Trump was elected by Russian interference in the election. The other is that the charge is false. Neither the CIA nor the FBI have provided any evidence whatsoever that any such interference occurred. Indeed, months into the case, the special prosecutor, the former FBI director, can produce no evidence. The whole thing is a sham, but it is ongoing. There will be no end to it, as it is designed to undermine President Trump with the people who elected him. The message is: “Trump is not for America. Trump is for Russia.”

This is astounding! The NSA has intercepts of all transmitted data. If Russia interfered in the U.S. presidential election the evidence would be obvious and immediately available.

Despite the obvious lies told by Brennan and Comey, The New York Times, Washington Post, CNN, MSNBC, and the rest of the scum, no one has been arrested and put on trial for their efforts to overthrow the elected president of the United States. This proves beyond all doubt that the president of the United States is a non-entity, a figurehead incapable of action independently of the Deep State that controls him.

If Vladimir Putin really believes from his meeting with Trump that all of the orchestrated false charges against Russia can now be removed and normal relations restored, Putin is in la-la land. Nikki Haley says that the U.S. will NEVER trust Russia. If Putin trusts Washington, Russia will be destroyed—and the rest of the world with Russia.

Dr. Paul Craig Roberts was assistant secretary of the U.S. Treasury under President Ronald Reagan and was associate editor and columnist at The Wall Street Journal. He has been a professor of economics in six universities, and is the author of numerous books available at the American Free Press bookstore.