While the CCGA hosted Nye and promoted his new book on the topic of his speech, the organization curiously didn’t mention his TC pedigree, just as it was mum about Economist editor-in-chief Zanny Minton Beddoes’s Bilderberg Steering Committee membership when she addressed the council about Brexit last October.

“The conventional wisdom is that only national interests matter. I’ve long believed that’s incorrect, and I’ve had so much ‘help’ from Donald Trump,” Nye, a Harvard Kennedy School of Government international relations scholar quipped at the Chicago program, moderated by Northwestern law professor Juliet Sorensen.

Sorensen asked Nye whether America should try to “make the world a better place.” He answered, “As long as we understand the limits of our power,” and added that, in his view, a president shouldn’t “have to give up” on his country but still should “look further” and take other countries, especially allies, into account.

Nye then wondered aloud: Should the U.S. “narrowly” and “myopically” focus on immediate transactional matters largely in its own direct interests in a Trump-like fashion, or should it “look broadly for a stable world order?” While noting the policies of FDR and other presidents, Nye answered that there really isn’t much of a dichotomy because, through institutions like the United Nations, a lot can be done to encompass both national interests and the interests of other nations.

Giving a glimpse into the mindset of globalism, Nye, referring to his new book, defined presidents FDR, Harry Truman, and Dwight Eisenhower as “the founders” of the still-reigning but evidently weakening world order. That is a clear-cut example of how today’s globalists reorient the nation’s thinking away from Washington, Jefferson, and Madison and toward a different trio of “founding fathers,” who presided over the undoing of much of what the real founders established. However, the weakening of the new order under Trump, and the TC’s deep-seated concerns that Trump is out-foxing the Deep State in several respects, is apparently what’s really behind Nye’s Chicago appearance—calculated to diminish Trump’s standing compared to other presidents.

“Obama placed much more emphasis on allies and institutions and multilateralism, and Trump is much more of a unilateralist—go it alone,” Nye stated. “He’s noted for his phrase ‘America first’; it’s not that America first is so important; it’s the way he defines it very narrowly as American interests and not much the interests of others. Obama was also a believer in American exceptionalism but believed you could accomplish that with other countries and with international institutions; so that’s the big difference between them.” Nye added in a separate CCGA video online.

In his main talk, Nye remarked that his three “founders” were “very much interested in promoting America’s national interests, but they defined it so that it encompassed the interests of others”—a statement that, just one day later, collided with the Trump administration’s engineering of a phase-one trade deal with China that is said to be highly beneficial to both nations and reportedly lays the groundwork for China to end its abusive trade practices.

While recalling that approximately 70% of the American people were “isolationist” in FDR’s day—a figure that’s around 33% today, according to the CCGA’s recent annual public surveys on foreign affairs that date back to 1974—Nye conceded that the globalist vision of a one-world society still faces rather formidable challenges in terms of convincing Americans to keep paying the new world order’s bills while Trump busily pursues a more nationalistic course, prompting some Americans to reexamine the tenets of globalization.

In a world of “rootless cosmopolitans and hardcore nationalists, we all have multiple loyalties,” Nye reflected. He then underscored the internationalist credo of the TC, the CCGA, the Council on Foreign Relations, the Atlantic Council, the Wilson Institute, the Brookings Institution, the Bilderberg Meetings, and similar well-linked groups by stating, “To pretend it all stops at the water’s edge is nonsense. . . .”

The positive takeaway from Nye’s speech, however, is the realization that the global elite labor relentlessly to track and control public opinion because they still fear a truly informed populace that just might find the right blend of populism and raw courage with which to defeat our world rulers for good. 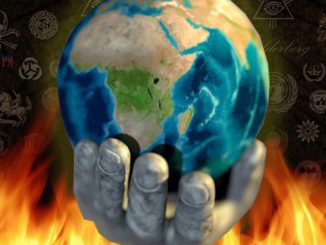 Are Globalists Plotting a Counter-Revolution?