Donald Trump turned his back on his word to protect the Second Amendment as he enthusiastically picked up the gun control mantra and embraced enacting additional gun control laws. In response to the president’s surprising “green light” signal, gun control bills that had been assumed dead on arrival have been resurrected.

At the time I wrote that column, the vast majority of conservatives, Republicans, and Christians paid no heed, because they said, “Donald Trump is ‘pro-Second Amendment’ and won’t let any more gun control legislation pass.”

Fast forward just four months later to after the Florida school shootings, and we watched and listened to Trump turn his back on his word to protect the Second Amendment as he enthusiastically picked up the gun control mantra of Dianne Feinstein, Chuck Schumer, and Nancy Pelosi and embraced enacting additional gun control laws.

Please understand: In spite of the mass shootings in Las Vegas and Texas, gun control Democrats in Washington, D.C. were mostly stymied, and the myriad gun control laws they were pushing appeared dead on arrival. Trump had campaigned and won as a fierce defender of the Second Amendment, and everyone (including Democrats) figured that even if some gun control bills passed the Congress, Trump was sure to veto them.

Following the mass shooting in Florida, there was no surge in gun sales (which is not normally the case—usually gun sales skyrocket after mass shootings in anticipation of more gun control laws being enacted), as conservatives and gun owners were confident that their constitutional right to keep and bear arms was not in jeopardy: Trump would make sure of that.

But, as I have tried to warn people, Trump has no core convictions; he has no center; he has no moral compass; and he is a dish rag when it comes to the Constitution. Of the 16 gun control bills in Congress that I referenced in my October 2017 column, Trump is now actively supporting at least 10 of them.

In point of fact, the original “Fix NICS” bill was introduced under Barack Obama and included outlawing private gun sales. Kentucky Rep. Thomas Massie is warning the American people that the Republican leadership in Congress is trying to pass the “Fix NICS” bill this week. He warns of how devastating the bill will be to America’s veterans and seniors who will be thrown into the “no buy” list for a host of reasons. And will the bill include the original language outlawing the private sale of firearms? Don’t count it out.

Trump also announced that he supported gun confiscation without due process. He twice said that government should take (confiscate) the guns first and worry about due process later. He then looked at Feinstein and told her he would support her bill. “Her” bill is the “assault-weapons” ban that would outlaw all semi-automatic rifles.

Already, the Republican house, senate, and governor of Florida have enacted one of the most draconian gun control laws in U.S. history. The law bans the sale of firearms to anyone under the age of 21; it mandates a three-day waiting period for most gun purchases; it adds a “red flag” law that allows law enforcement to confiscate the firearms of individuals who have not committed a crime or have not even threatened to commit a crime—but who might be “suspected” of having “mental health” issues; it adds additional background checks for gun purchases; and it mandates “mental health” screening for all public school students in the state.

Again, these Marxist-inspired gun control laws were passed by a Republican-led House, Senate, and governorships.

Do you think for one minute that Trump’s pro-gun control rhetoric had nothing to do with the way those Republicans voted in Florida? Trump is the leader of the Republican Party. The party takes its cues from him. When Trump embraced and promoted the enactment of more gun control, it was a signal to Republicans and Democrats alike to proceed with more gun control. And that’s exactly what both parties are doing.

A few days ago, the state of Washington became the first state in the country to enforce its newly enacted “red flag” law and confiscate the firearm of a man who had broken no law and who had not even threatened anyone. His firearm was confiscated on the mere notion that he was “suspected” of having “mental health” issues. I wrote about this Gestapo-style episode last week.

Now, the state of Illinois is about to pass a law that would authorize blanket gun confiscation of everyone under the age of 21. Writing for American Thinker, Daniel John Sobieski writes:

It is no longer a conspiracy theory spawned by deplorable bitter clingers, but a creeping reality spawned by shootings law enforcement could have prevented but didn’t.  The Illinois House has passed legislation requiring 18- to 20-year-olds to give up certain legally purchased and legally owned firearms:

A bill requiring 18 to 20-year-olds to hand over or transfer ownership of heretofore legally possessed “assault weapons” is gaining sponsors in the Illinois Senate after passing the House last month.

After being introduced in the upper house by Senate President John Cullerton (D-Chicago), the bill has added seven co-sponsors in the last week.  Notable among them was Sen. Jim Oberweis (R-Sugar Grove), the NRA “A” rated 2014 Republican nominee for U.S. Senate.

Gun confiscation is here.  First they will come for the young, who can go to war with guns but can no longer go hunting with them or protect their families.  If you are a 20-year-old single mom with a restraining order against a violent ex-boyfriend, well, you’ll just have to trust your life to 911 as your door is being kicked in.  Meanwhile, the government wants you to give it your guns.

Notice that Democrats and Republicans in Illinois are supporting this Marxist bill that confiscates guns from law-abiding people with no due process whatsoever.

Make no mistake about it, this is the beginning of totalitarian government.

Instead of enacting additional gun control laws, what our president, governors, and lawmakers should be doing is expunging existing gun control laws—including eliminating virtually all of America’s gun-free zones.

It is typical of gun-control zealots that their answer to the slaughter invited by gun-free zones is to create more gun-free victims.  Those who fear an armed citizenry are typically those who believe that all rights are on loan from an all-powerful government. The Founders wisely wrote the Second Amendment to protect the other nine in the Bill of Rights.

Critics of the Second Amendment say they are not going after guns used for legitimate activities such as hunting.  But when the Founders wrote the Second Amendment, it was because the British were coming, not because it was the start of deer season.

In the hands of British redcoats, the musket was an assault weapon.  In the hands of a law-abiding American, even those between 18 and 20, an AR-15 is what the Second Amendment is all about.

It is time for the American people to forget about which party controls Congress and who is in the White House and start standing en masse for the Constitution and Bill of Rights—and against any new gun control laws—or the Second Amendment (and the rest of our liberties) will soon be toast.

I want to once again remind readers that self-defense—including defense against tyrannical government—is more than a right guaranteed in the Second Amendment to our Constitution; it is a duty assigned us in nature by our Creator. For anyone, especially a Christian, to willingly surrender their means of self-defense is not only a crime against liberty; it is a sin against God.

I urge my Christian friends (and anyone else) to read the book my constitutional attorney son and I wrote entitled To Keep or Not To Keep: Why Christians Should Not Give Up Their Guns.

Mark it down: Any law demanding free men to surrender their arms—especially their AR-15 rifle—is unconstitutional, unnatural, immoral, and unbiblical. And no Christian or any other free man should ever comply with such a law.

I know that there is a plethora of pastors who teach that Christians ought to obey the government should it outlaw our guns. They are wrong. They are wrong biblically, constitutionally, and morally.

Our book shows the natural and biblical duty of self-defense. I don’t know of another book like it. Many books deal with this subject from a constitutional perspective, but none that I know of deals with this subject from a biblical perspective. And make no mistake about it: The right to keep and bear arms is as much a moral and biblical issue as it is a political and constitutional issue.

With all that is happening today, it is crucial that people (especially Christians) become familiar with the truths contained in this book. I urge you to order one for yourself and one (at least) for your friends and kinfolk—and maybe for your pastor. Order To Keep or Not To Keep: Why Christians Should Not Give Up Their Guns here.

Chuck Baldwin is a radio broadcaster, syndicated columnist, and pastor dedicated to preserving the historic principles upon which America was founded. 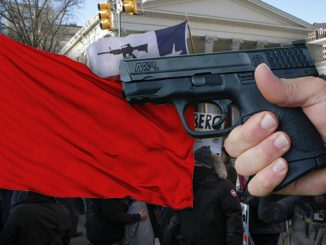 2 Comments on This Is the Beginning of Totalitarian Government