Tracing the family tree of Cultural Bolshevism turns up a group of unbalanced mal con tents with one thing in common: a commitment to destroy Western civilization.

When former President Bill Clinton told a group of black journalists that America “can live without having a dominant European culture. We want to become a multiracial, multiethnic society,” he wasn’t talking off the top of his head. He clearly repeated this theme in his State of the Union address.

Clinton was simply joining a chorus of socialists-cum-revolutionaries who have been attacking Western culture and the Christian values system associated with it since early in this century.

The list contains well-known names. But it also contains the names of heroes of the intellectual left un known to the general public. For instance, any high school student (even from an American public high school) would undoubtedly recognize the names of Karl Marx, Vladimir I. Lenin and may be even Georg W.F. Hegel. But far more influential in today’s attack of Cultural Bolshevism (CC) on Western values are Antonio Gram sci and his sycophant, Herbert Marcuse. Marcuse was born in Germany in 1898 and came to America in time to help foment the radical 1960s.

It wasn’t “Hanoi Jane” Fonda, her ex-husband Tom Hayden or even Huey Newton and the Black Panthers who invented the ideas and slogans that came to be identified with the “drop out” generation. It was Marcuse, drawing on Hegel, Marx and Sigmund Freud, who introduced the theory of “the great refusal,” meaning that individuals should reject and subvert the existing social order as repressive and conformist without waiting for a revolution.

Like a number of his fellow Cultural Bolsheviks, Marcuse left Germany one step ahead of the Gestapo to bring his “enlightenment” to America. He taught philosophy at various U.S. universities until his death in 1979.

Gramsci was a leading light of Italian revolutionary politics following World War I when the Soviets hoped to take over all of Western Europe with planned “revolutions of the proletariat.” Those violent revolutions didn’t happen, but the ideologues of the left flourished.

Gramsci wrote for the socialist papers Avanti and L’Ordine Nuovo (“The New Order”; sound familiar?) which he co-founded in 1919. He helped found the Italian Communist Party in 1921 and became its leader in 1924.

Gramsci also worked for the Comintern in Moscow, Vienna and Italy from 1922 to 1926.

A member of the Italian Chamber of Deputies, he was arrested when the Fascists took power in 1926 and died after being released in 1937.

Most Americans may never have heard of him, but every intellectual leftist and Cultural Bolshevik has (or knows someone who has) copies of Gramsci’s Prison Notebooks and Letters From Prison. These writings deal with wide-ranging cultural and political issues and (according to Groliers Multimedia Encyclopedia [1998]), “have been enormously influential among Italian intellectuals, both Marxist and non-Marxist.”

You can add to that the American elite intelligentsia, and the best-known U.S. colleges and universities which are infested with neo-Bolsheviks.

The ideas that art must be ugly and children should have sex education beginning in kindergarten didn’t originate in the 1960s or even in the United States. They came from the diseased mind of a man named Gyorgy Lukacs. A Hungarian Marxist philosopher, literary critic and writer, he was considered one of the foremost Marxist theoreticians during the first half of the 20th century.

It was Lukacs who developed a link between art and social struggle. It was after moving to Vienna in the 1920s that he wrote his History of Class Consciousness, considered a key work of Cultural Bolshevism. His contemporary communists, however, shunned him as deviating from Leninist orthodoxy.

Perhaps it was because he was fresh from the hierarchy of the Bela Kun government of Hungary, a Communist regime that lasted only about a year. Lukacs came up with the idea of sex education. Kun was ousted and Lukacs fled the country.

Two other guiding lights of the Cultural Bolshevism movement were Theodor W. Adorno and Max Horkheimer. Adorno was a sociologist, philosopher and musicologist living in Germany who wrote (along with Horkheimer) The Dialectic of Enlightenment.

Many of these Cultural Bolshevik intellectuals came to America to help establish the Institute of Social Research (ISR)—or at least a version of it—here. This is the same outfit that was known as the Frankfurt School in Germany.

The effort to translate Marxism from economics into culture did not begin with the student rebellion of the 1960s. It goes back at least to the 1920s and the writings of the Italian communist Antonio Gramsci. In 1923, in Germany, a group of Marxists founded an institute devoted to making the transition, the Institute of Social Research, which came to be known as the Frankfurt School. One of its founders, Gyorgy Lukacs, stated its purpose as answering the question, “Who shall save us from Western civilization?” The Frankfurt School gained profound influence in American universities after many of its leading lights fled to the U.S. in the 19 30s to escape National Socialism in Germany.

The millionaire Cultural Bolshevik ideologue Felix Weil, a founder of the Frankfurt School, sponsored something called the First Marxist Work Week in Germany (sort of like a radical Labor Day). In 1971, he wrote that he “wanted the institute to become known, and perhaps famous, due to its contributions to Marxism as a scientific discipline.”

Carl Grunberg, the first director of the ISR, concluded his opening address by stating his personal allegiance to Marxism as a scientific methodology. Horkheimer became a director of the ISR and set out specifically to translate Marxism from economic terms to cultural terms.

Marcuse, mentioned above, was the force behind moving the Frankfurt School to America in the 1930s. He established it in New York City with help from Columbia University.

Following World War II, Horkheimer and his buddy Adorno returned to Frankfurt, but Marcuse stayed in the United States. The latter was at the University of California in San Diego in the 1960s when student radicalism became the rage. Soon, student radicals were spouting slogans cooked up by the Frankfurt School.

Adorno’s theories are responsible for “modern thinking” on art and music—e.g., art “must be alienating to be true to the state of alienation that exists under Western culture.”

Betty Friedan, a name well known in America for her thesis on feminism, didn’t come up with her radical ideas on her own. The less known Eric Fromm, a Freudian psychologist, believed strongly in matriarchy.

Fromm says women are forced into roles created by the oppressive Western culture. If we could get rid of masculinity, we would have a soft, happy, easy sort of nirvana life in a matriarchal society. That theme now underlies radical feminist thought. Does this all sound familiar?

And that’s a short list of those whose thinking and writing resulted in what we know today as political correctness.

Now, if you think that the basic ideas of Cultural Bolshevism are nutty, remember that these ideas are expressed in turgid prose indecipherable to normal people and of interest only to a small intellectual clique whose basic motivation is pure hatred of all of the historic attainments of Western civilization. That the ideas of the Frankfurt School have infiltrated into all levels of our culture is the reason for our national decline and the protesting and rioting you see in America now. 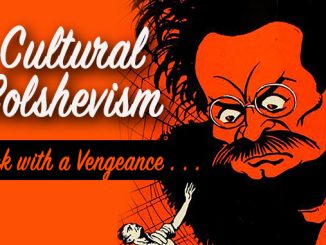 3 Comments on The Fruits of Political Correctness