A young woman has been removed from her Florida middle-school teaching job for expressing cultural views online-under a pseudonym-after the PC police at a far-left website made it their mission to get the woman fired. Political correctness had taken on a whole new significance in the U.S., as increasing numbers of Americans lose jobs and reputations due to speaking their minds, regardless of the First Amendment.

A 25-year-old middle-school teacher in Florida has been “removed from the classroom” following controversy sparked by an article published last weekend by the far-left “Huffington Post” commentary website highlighting the teacher’s politically incorrect social media posts and podcast program, it was recently reported.

Dayanna Volitich, who taught social studies at Crystal River Middle School in the Citrus County School District in Florida, used the online pseudonym “Tiana Dalichov” to post on social media, including Twitter, and to host her podcast program called “Unapologetic,” which addressed a number of controversial issues facing America and the wider world in a straightforward, honest manner. On the podcast, which has since been removed from the Internet along with her social media profiles, Ms. Volitich discussed a variety of complex and controversial issues, including mass immigration, state enforced diversity and multiculturalism, educational issues, and related topics.

Reporters from the Huffington Post went so far as to contact the school, which prompted an internal investigation ultimately resulting in the teacher’s ouster. Other Americans, including this reporter, have been targeted by malicious reporters in recent years in an effort to harm their professional careers and bring damage to their reputations, as was the case with Ms. Volitich.

“On Friday, March 2, 2018 the Citrus County School District was made aware of a concerning podcast by a Huffington Post reporter,” Sandra Himmel, Citrus County School District superintendent, announced on Sunday in an official statement posted on the school district’s Facebook page. “The reporter indicated they believed one of the persons participating in the podcast was a teacher at Crystal River Middle School. The human resources department was notified and an investigation was initiated immediately. The teacher has been removed from the classroom and the investigation is ongoing. Pursuant to Florida statute an open investigation and materials related to it are exempt from public record and cannot be discussed until the investigation is complete.”

Efforts by AFP to contact Ms. Volitich have thus far been unsuccessful.

In the Huffington Post article, the biased, left-leaning outlet published a number of screen shots of tweets “Tiana Dalichov” made in the past in an effort to demonize her and smear her as a “white supremacist” and “racist.” The tweets highlighted by the Huffington Post indicate Ms. Volitich was a critic of the dubious concept known as “white privilege,” an anti-white, Marxist perspective endlessly promoted and disseminated on college campuses and schools across the country. Ms. Volitich was also apparently interested in “the Jewish Question,” with one tweet noting that she was reading Dr. Kevin MacDonald’s book, The Culture of Critique.

In one tweet, which the Huffington Post and other leftists used to hysterically demonize Ms. Volitich and paint her as a radical “white supremacist,” she harmlessly stated: “It isn’t supremacist or hateful to prefer your own people over others.”

The Citrus County School District was quick to denounce Ms. Volitich following the publication of the malicious Huffington Post article, removing her from the classroom almost immediately.

“She does not speak on behalf of the Citrus County School District,” Scott Hebert, the executive director of educational services for the district, told the Huffington Post. “The views she’s listed [online] are really not in line with how our district operates.”

The ouster of Ms. Volitich demonstrates once again the perilous state of free speech in America today. Those holding controversial and politically incorrect opinions are regularly targeted by the hostile mass media and radical activist organizations such as antifa in an effort to censor their speech, harm their reputations, and, if possible, jeopardize their professional life. 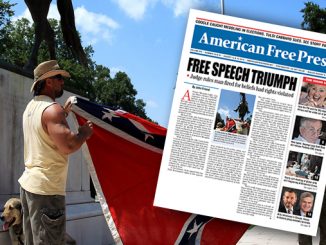