If you’ve ever wanted to examine whether the New World Order is real or just the stuff of conspiracy theory, it’s time to check out the work of prolific author Dr. John Coleman. Besides authoring over 25 books and over 400 white papers on subjects AMERICAN FREE PRESS and its forerunner The Spotlight have covered over the past four decades, Coleman is a constitutional scholar, museum researcher, historian and lecturer.

In a first-ever offer for this newspaper, Coleman has made three of his most popular books available to AFP readers for a discounted price: The Illuminati in America, The Rothschild Dynasty and Beyond the Conspiracy: Unmasking the Invisible World Government, the Committee of 300. Coleman also answered questions from this AFP reporter regarding his life’s work.

AFP asked Coleman how his background prepared him for his writings.

“I read documents at the Balliol College Library at Oxford,” he told AFP.

As an indication of the closed society at the University of Oxford, it is clearly marked on the library’s website, “Library for College Members Only.” Oxford’s origin date is unknown, although there is evidence of its founding as far back as 1096, making it the oldest university in the English-speaking world, and the world’s second-oldest surviving university.

“I did not attend Oxford, but due to connections of my father, I was given permission to read there,” said Coleman. “The library contained a wealth of information. I also studied at the British Museum for five years.”

Established in 1753, the British Museum in London has a permanent collection of 8 million works and is one of the largest and most comprehensive in existence, with books from all continents, illustrating and documenting the story of human culture from its beginnings to the present. Nearly 7 million people visit each year, making it the UK’s most-visited museum.

AFP asked why Oxford and the British Museum were important to this matter, and whether or not this topic could be researched in any library.

“The British Museum is known to be the greatest repository of deeply-detailed, specialized books,” explained Coleman. “Ditto for Oxford. Try this yourself: Go to a few libraries near you and ask them for books on the British East India Company or the Tavistock Institute. I guarantee you will be met with a blank stare.”

Coleman continued, “In addition, I studied 37,000 pages of the Congressional Record; no other writer I know of has this distinction.”

“The United States Constitution,” he answered.

AFP asked what transpired for Coleman to take pen to paper to expose the New World Order.

“When serving in Angola, dispatches not meant for me fell into my hands,” he explained. “They concerned the plan to let rebels through when they returned from study at the communist Patrice Lumumba University, Moscow [now named Peoples’ Friendship University of Russia] instead of rounding them up. I realized that those in the highest authority had betrayed people and governments.”

Coleman has said in the past that he served in Angola as a British political officer. But when AFP asked who Coleman was serving with in Angola and who the dispatch was from, he said: “I regret that I am still bound not to answer this question for specialized reasons.”

AFP asked if the forces Coleman writes about have grown stronger since he first discovered them, and if he suspects they will be successful with their plans.

“Infinitely,” he answered, “and they have already and continue to be successful.”

AFP asked what an average person can do to halt or slow down the elite’s progress.

“Inform the public, the voters,” he said, “through my books and the books of others about what is happening and urge them to vote out of office politicians blatantly lying to the American people.”

AFP asked if he believed there were any honest U.S. politicians left.

“Yes,” he said. “They can be counted on the fingers of your hand.”

Coleman urged this reporter, before it’s too late, to help spread his nearly 40 years of research on the New World Order to the reading public. Coleman suggested beginning with these three books: 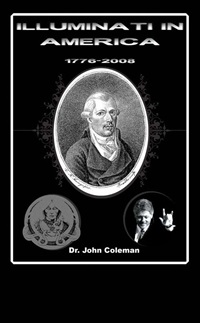 2. The Rothschild Dynasty, softcover, 209 pages, $22. This book demolishes the myths and legends surrounding the Rothschild family, “leaving the stark and very startling truth as never before revealed.” It painstakingly details exactly how Mayer Amschel Rothschild, born in “Jews’ Alley,” the Jewish ghetto of Frankfurt, Germany, seized the “chance” that was to make the Rothschild family the virtual rulers of Europe. Through 24 chapters, Coleman lays the Rothschilds bare, all the while making sure no one confuses the facts with targeting Jews. “I want it to be understood,” Coleman wrote in a “Note of Explanation,” “that this work should not and cannot be construed as ‘anti-Jewish’ or ‘anti-Semitic.’ It is neither. Rather it is a factual account of a family that happened to be Jews, and who themselves made no secret of [their Judaism].” 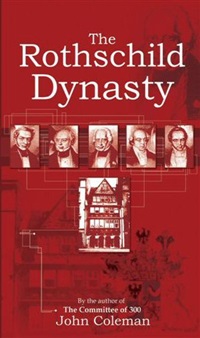 3. Beyond the Conspiracy: Unmasking the Invisible World Government, the Committee of 300, softcover, 233 pages, $25. This book reveals in 16 chapters the shadow organizations that call the shots, “not [the elected] professional politicians or brilliantly dressed ambassadors. . . . The unknown men who take part in these councils are high financiers who are superior to vain ephemeral politicians.” Some of the topics covered in detailing the committee include the narcotics trade, the role of the military, the Federal Reserve coup d’état, the conspiracy of free trade, war and paper money. 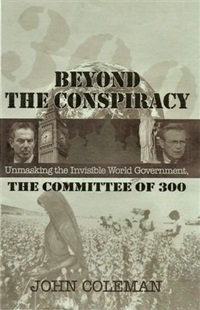 Be sure to get all three of Coleman’s books. Our future may depend upon it. 

11 Comments on Secrets of the New World Order Exposed