The Democrats together with the controlled press have brought their war against the president to appalling heights.

The recent secret testimony of acting U.S. Ambassador to Ukraine William Taylor was breathlessly reported to be “damning” to President Donald Trump. Taylor testified behind closed doors, however, in secret impeachment hearings presided over by Rep. Adam Schiff (D-Calif.). Selective leaks focused exclusively on Taylor’s opening statement and failed to include any of the cross-examination from Republican representatives.

Establishment reaction was quick and predictable. The New York Times described Taylor’s nearly 10 hours of testimony as “by far the most damning account yet to become public in the House impeachment inquiry—Mr. Taylor described a president holding up $391 million in assistance for the clear purpose of forcing Ukraine to help incriminate Mr. Trump’s domestic rivals.” Dana Milbank of The Washington Post claimed this of the testimony that “shook Washington,” in the words of so many mainstream journalists: “In an instant, the impeachment inquiry no longer rested on the credibility or motives of a whistleblower.” That “whistleblower,” of course, is the still-unidentified CIA employee, who was not blowing the whistle on the CIA, and thus shouldn’t reasonably be described as one.

The reality is, Taylor, who has never met or even spoken with Trump, simply passed on third or fourth-hand information, much like the “whistleblower,” that there was indeed a quid pro quo between the president and Ukraine, in which American aid would be withheld unless there was an investigation into the corruption of Joe and Hunter Biden. Taylor claimed that he’d been told this by senior National Security Director Tim Morrison, who reportedly heard it from U.S. Ambassador to the European Union Gordon Sondland. Sondland, however, disputed this, and it contradicted his own earlier closed-door testimony before Schiff. Sondland told The Washington Post, through his attorney, that he “did not recall conversations recounted by Taylor in his House deposition.”

Thankfully, some clearer heads are pushing back against the mainstream media’s bogus narrative.

Republicans called for Taylor’s full testimony to be released. As Rep. Devin Nunes (R-Calif.) told Fox News’s Sean Hannity, “The truth is, in two minutes, John Ratcliffe destroyed this witness. There is no quid pro quo.”

Rep. Mark Meadows (R-N.C.) lamented that “the leaks out of today’s witness interview have been laughably overblown and don’t tell the full story. Still no evidence of quid pro quo. Much of the statement and hearsay allegations didn’t hold up against any real scrutiny. The full transcript should be released immediately.”

Trump retweeted Ratcliffe’s main point, and added, “Where is the whistleblower? The Do Nothing Dems case is dead!”

More significantly, Rep. Adam Schiff’s (D-Calif.) House Intel Committee staffer Thomas Eager met with Taylor in the Ukraine on Aug. 25 on a trip sponsored by the Atlantic Council, which is an official partner of Burisma. Hunter Biden sat on the board of Burisma. It was only three days later, on Aug. 28, that Politico published a story about the possible withholding of aid based upon a leak from “a senior administration official.” Coincidence? As one of the all-time great conspirators, Franklin D. Roosevelt, once said, “Nothing in politics happens by accident. If it happens, you can bet it was planned that way.”

Two-dozen Republicans, reacting to Schiff’s closed-door impeachment hearings, which they bemoaned as a “Soviet-style process,” were described as “storming” the Oct. 24 session by the mainstream media. They appeared to be taking Trump’s recent advice to “get tough and fight” for him, as they breached House security rules, shouting “let us in” and forced their way into the hearing, resulting in witness testimony being delayed for five hours.

One Republican participating in the hearings, Rep. Jim Jordan (R-Ohio), said, “It’s finally reached the point where members just said they’re so frustrated at the idea that they can’t be a part of this and see what’s going on.” 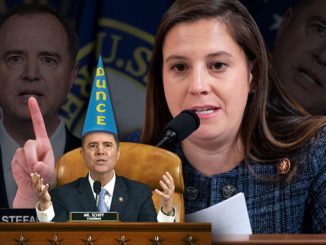 Making Mincemeat Out of Adam Schiff