Decades of schizophrenic warnings about global warming and ice ages are bogus.

With non-stop coverage of the latest doomsday doyenne the powers-who-should-not-be have strutted out on the stage, it’s easy to forget just how many times dire warnings have been issued about how the Earth’s climate was on the verge of wiping out all life on the planet.

For those of you fed up with the grating gyrations of Greta Thunberg (the troubled teenager being used by climate-change Chicken Little leftists like George Soros and Bill Gates), here are some nasty little facts the state-run media would love to keep under wraps.

A few months after The Wizard of Oz had its theatrical premiere in Green Bay, Wisc. in 1939, a newspaper headline appeared as follows: “Greenland’s Glaciers Melting, Says Scientist.” “All the glaciers in Eastern Greenland are rapidly melting, declared Prof. Hans Ahlmann, Swedish geologist,” the article screamed. “It may without exaggeration be said that the glaciers, like those in Norway, face the possibility of a catastrophic collapse,” Ahlmann crowed. They just love that word catastrophe, don’t they?

Seven-and-a-half years later, Ahlmann—feted and touted by those much smarter than us—was at it again, issuing his dire warnings: “The possibility of a prodigious rise in the surface of the ocean with resultant widespread inundation, arising from an Arctic climate phenomenon was discussed yesterday by Dr. Hans Ahlmann, a noted Swedish geophysicist at the University of California Geophysical Institute. A mysterious warming of the climate was slowly manifesting itself in the Arctic,” stated Ahlmann, who warned that “oceanic surfaces would rise to catastrophic proportions and people living in the [Greenland] lowlands . . . would be inundated.” It’s no mystery, Hans; it’s nature.

“Polar Ice Thaw Increasing: Glaciers Said To Be Melting,” said the headline. This time, Arctic expert Dr. William S. Carlson said that “the Polar icecaps were melting at an astonishing and unexplained rate and were threatening to swamp seaports by raising the ocean levels.” We’re still waiting, Bill.

Arctic explorer Adm. Donald McMillan was next to warn, stating, “There are now 6 million square miles of ice in the Arctic. There once were 12 million square miles.” Perhaps realizing their dire predictions were not panning out, the “experts” were no longer warning of global warming, but had switched to global cooling, and a coming ice age! You can’t make this stuff up.

The next expert trotted out was James P. Lodge Jr., a scientist at the National Center for Atmospheric Research. In an article titled “Scientist Predicts a New Ice Age by 21st century,” Lodge warned that “[a]ir pollution may obliterate the Sun and cause a new ice age in the first third of the new century.” Uh, Jim, can you pass me those sunglasses?

Things were so dire in the 1970s that two of the nation’s top geologists found it necessary to alert President Richard Nixon of the impending doom. “[A] global deterioration of climate, by order of magnitude larger than any hitherto experienced by civilized mankind, is a very real possibility and indeed may be due very soon. The present rate of cooling,” they warned, “seems fast enough to bring glacial temperatures in about a century, if continuing at the present pace.”

By now, most of the fake news media was on the bandwagon, running story after story on predictions of the coming ice age.

“An international team of specialists has concluded from eight indexes of climate that there is no end in sight to the cooling trend of the last 30 years, at least in the Northern Hemisphere,” squawked the nation’s “newspaper of record.”

The following year, “The Gray Lady” reversed course, predicting an Arctic meltdown, “blaming global warming caused by carbon dioxide emissions. . . . There is a real possibility that some people now in their infancy will live to a time when the ice at the North Pole will have melted, a change that would cause swift and perhaps catastrophic changes in climate.” There’s that word “catastrophic’ again.

Not yet synched to spew identical nonsense, the Chicago Tribune still thought global cooling was the way to go, and “reported” some more unfounded, dire warnings about a freezing planet. Toward the end of the 1980s, however, the global warming playbook was adopted by all in the fake news media, who have been constantly predicting polar icecap “melting on a catastrophic scale.” And of course, our good friends in the fake news media would never put the below in their fine papers or networks:

In a Sept. 24, Breitbart News Network headline, “500 Scientists Write UN: ‘There Is No Climate Emergency,’ ” the only news platform with some heft reported on the letter sent from the oft-overlooked “scientists and professionals in climate and related fields” to the United Nations, “asking for a long-overdue, high-level, open debate on climate change.” The two-page letter should have been splattered across the pages and screens of all the major media, but here’s why it wasn’t, as revealed by its main points: 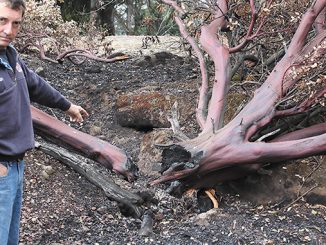 Something Not Right With CA Wildfires 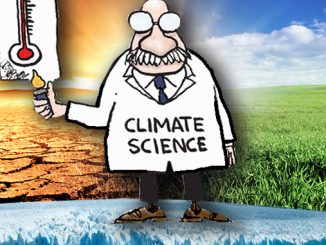 6 Comments on 500 Scientists: No Climate Catastrophe