It’s not just America’s neoconservatives and radical left that are rooting for America’s failure; globalists are increasingly concerned the U.S. has lost its global way. Now, Western think tanks apparently need to “rediscover a sense of purpose” as well.

The head of one of the world’s oldest elite foreign policy institutions in London is calling for the world’s pro-globalist think tanks to unite like never before, lest their neoliberal world order dissolve in the rising populist tide.

Chatham House Director Dr. Robin Niblett, in an 11,000-word article entitled “Rediscovering a Sense of Purpose: The Challenge for Western Think Tanks,” declared: “To devise a common work [program], do think tanks from across the world also need to possess a common sense of purpose? After something like a hundred years of think tank experience, the answer is yes.”

Chatham House, also known as the Royal Institute of International Affairs, is a member of the original array of gilded private institutes that arose and revolutionized the world of geo-politics in the early 20th century. Other major members include the Carnegie Endowment for International Affairs (shown to have been involved in apparently treasonous activities by the Reece Committee in the 1950s), along with the Brookings Institution, and, of course, the Council on Foreign Relations (CFR).

Echoing the grave concerns expressed during 2018 by CFR President Richard Haass to Britain’s House of Lords, Niblett noted in his article that he’s apprehensive about the rise of populist politics, the implication being that think tanks must either modify their mission or risk becoming increasingly irrelevant—possibly to the point of losing their grip on influencing government policy largely from “behind the throne,” something they’ve perfected ever since the eldest think tanks’ early but unsuccessful efforts to push the U.S. into the League of Nations, a failed forerunner of the United Nations.

“The deeper challenge for Western think tanks is whether they can rediscover a sense of purpose as fit for the 21st century as that which mobilized their counterparts in the early 20th century,” Niblett wrote with noticeable nostalgia regarding the early days of stealthy power-brokering. He added that the world’s think tanks “need to stand for certain core principles of governance that have been shown by the experience of the last 100 years to offer the best prospects for sustainable security and prosperity.”

Exactly whose “sustainable security and prosperity” is at stake is never made clear, though the pinnacled investment class that undergirds these think tanks, and assuredly not the average citizen, is a safe bet. However, Niblett confesses that the age of the Internet, whatever its shortcomings, has generally enabled the citizenry to become better informed and therefore more skeptical of elite opinion.

Niblett put it as gingerly as he could: “Policy audiences appear less interested in the outputs of think tanks if they believe that these have no public resonance beyond the expert circles in which they were developed.”

Therefore, he added: “Think tanks have to apply a growing proportion of their resources to trying to mobilize popular engagement with their ideas. One approach has been to raise their public profile by commenting more on current policy developments, rather than analyzing their underlying drivers. The danger is that this blurs the line between think tanks and the media.”

What he’s not saying, however, is that these tax-exempt outfits have long collaborated with the news media, even to the point of media personnel speaking at, or moderating, programs produced by these institutions but never reporting objectively on them. In this manner, the think tanks—lavishly funded by uber-wealthy donors, banks, war profiteers, and other well-connected entities—help formulate public policy with almost nothing in the way of general publicity on how their power-centralizing ideas are massaged and implemented as public policy.

Niblett evidently felt compelled to further confess that think tanks, as critics have long contended, really are a bridge between the super-rich and government and supply personnel to government itself, beyond formulating policy.

“In the United States, think tanks became holding pens for future appointees to presidential administrations, where they developed and honed their ideas for future policy,” he revealingly wrote, adding that a 1974 Brookings Institution study resulted in the creation of the Congressional Budget Office, and the Center for Strategic and International Studies in 1986 helped reform the command of the U.S. military.

Such modesty. Authors such as James Perloff have shown—via his highly respected book The Shadows of Power: The Council on Foreign Relations and the American Decline—that these think tanks played a nefarious role in defaming and subduing American “isolationism” and manipulating government policy to assure U.S. entry into World War II and, from there, laid the groundwork for America to police the world, an essential component of building world government.

And while Niblett admits that the world’s think tanks have at times blundered in their pursuit of globalization, and that their worldview has its “inherent weaknesses,” he remains confident that these think tanks, if they combine forces and arrive at a set of lasting principles with which they can re-invent themselves, can continue to short-circuit national sovereignty and real democratic impulses, which they deride as “populism,” and instead promote a false democracy as a cover for rule by an unelected oligarchy—the very antithesis of democratic government. 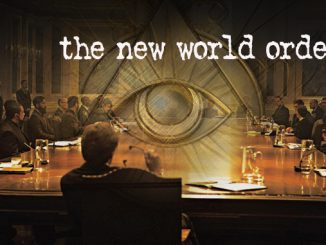