Cliven Bundy speaks with AFP about his son’s efforts to ensure right to worship.

Some significant pushback against a Covid-19 crackdown that is infecting our Bill of Rights started on April 3 in Boise, Idaho. Noted freedom activist Ammon Bundy and a few dozen others—contrary to Gov. Brad Little’s Covid-19 edict banning group gatherings—met inside an old factory to discuss how to protect and restore a Constitution that’s in effect being repealed, one Covid-19 “control” measure at a time. Ammon is the son of famed Nevada rancher and constitutionalist Cliven Bundy and his wife, Carol.

Those at the gathering decided that one of their first actions would be to peaceably assemble for an Easter church service on April 12, according to an interview Ammon conducted with The Free Thought Project.

Several of the 100-plus attendees came from outside of Idaho to attend the service. Ammon—who in recent years has become emblematic of efforts to resist government overreach—posted video footage of the church service on Facebook.

Speaking at a podium emblazoned with the words “Defy Martial Law,” a minister opened the service by praying. “Thank you so much, Lord Jesus, for allowing us this opportunity to gather together. . . . We pray that your spirit will be here, that your anointing will be here; that you will touch each soul . . . as we honor you and talk about your resurrection. We will not operate in fear today,” the pastor said.

Another local pastor, Diego Rodriguez, moderated the service, which included an uplifting singalong video of a prerecorded Easter service featuring a black gospel singer. After the video, Rodriguez remarked: “There once was a time in America when it wasn’t a news story to have church. There was no reason for us to not have a service. . . . The pulpit has never been a place historically that is supposed to ignore the current events of our day, particularly when oppression or tyranny is involved. The church should be a place where people can come to receive guidance, instruction, inspiration, healing, deliverance, and most of all, the truth.”

Ammon himself briefly addressed the service, saying: “It’s part of the rights that have been given to us, to shake hands and share our love and our appreciation of each other. . . . When your liberty has been taken from you, then you begin to understand how important it is, and we stand up for it . . . . When you believe in Christ . . . and the example he showed us, you will never infringe upon your neighbors’ rights. Therefore, where there is Christ, there is liberty.”

At press time, Carol Bundy confirmed that her son was unusually busy. AFP was able to speak with Cliven Bundy. While noting that he recently re-read the First Amendment, the elder Bundy, who’s no stranger to facing tyranny head-on, told AFP on April 13, “I’ve always felt like that Constitution was inspired. Here we are, actually turning against the First Amendment: speech, worship, assembly, and we’re supposed to be able to petition our leaders.” Bundy said:

In my way of thinking, we have to be cautious about this virus and I feel like that’s what our country is doing and what the world’s doing. But on the other side, I look at it like a political thing. I don’t know where we’ve ever lost so many freedoms. I mean, we’re almost down to the point of having no freedoms left if we continue with the attitude of the people and the way the nation’s running. And there is one group of people this is not affecting very much, and that’s the bureaucrats. Have they totally taken hold of this nation?

Asked about the reliability of the Covid-19 statistics that the nation is force-fed by the mass media cartel and government health bureaucracies, he replied: “Well, you want to trust it. You hear one report, and of course the next day you hear another report. We don’t know whether a person died of a heart attack or from this virus, but they’re still counting it that way.”

While describing Nevada as “real restrictive” and noting that it’s surreal to see the world-famous Las Vegas strip deserted, Cliven said a saying common around Nevada is that when the churches and casinos both agree to shut down, meaning “heaven and hell agree,” then “it must be serious.”

Bundy reflected on the standoff and his subsequent arrest, and the arrest of Ammon and others, six years ago, when the Bundy family and scores of supporters resisted a federal attempt to seize the elder Bundy’s cattle over a grazing-fees dispute:

This country is built on the principle of freedom and liberty. And I think “We, the People” are going to have to make a judgment here.

When I was in jail and all those indictments and decisions came down, I always wondered, who’s pushing the button? I watched the Bureau of Land Management and the Forest Service and Park Service—they brought an army against me. And now you see these health departments—is it their turn to bring an “army” against the people? 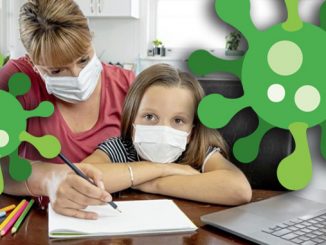