The government has finally caught on to the domestic terrorism threat posed by the far-left, neo-Bolshevik antifa network, which is consistently coddled by the leftist media. This is front-page news in the latest AFP, Issue 41&42, mailed Friday to print subscribers and available online for digital subscribers.

The Department of Homeland Security (DHS), founded in the aftermath of 9/11 ostensibly to safeguard and protect the United States and its citizens from foreign and domestic threats, announced its new counterterrorism strategy earlier this summer.

In the ensuing weeks, the mainstream media latched onto DHS noting the few lone-wolf white supremacist mass killings as cause for concern. What the fake news media totally neglected to mention, however, is that the U.S. agency also cited the extremist, anti-government views and actions of antifa—a radical, far-left group that has been defended by multiple mainstream media talking heads.

“Today, the United States faces an evolving threat environment, and a threat of terrorism and targeted violence within our borders that is more diverse than at any time since the 9/11 attacks,” Acting Department of Homeland Security Secretary Kevin McAleenan stated during a recent event at the prestigious Brookings Institute, where he announced the new strategy. Thus, he said, DHS must “expand its counterterrorism mission focus beyond terrorists operating abroad, to include those radicalized to violence within our borders by violent extremists of any ideology.”

In late August, DHS published the “Strategic Framework for Countering Terrorism and Targeted Violence,” a 40-page report outlining the department’s view of the various and evolving threats facing the country, ways in which it can better coordinate with state and local governments as well as private institutions to identify and counter the threats, and how it will communicate with and educate the public on these matters. The newly announced report does single out the alleged threat of “white supremacist violent extremists,” a policy that organizations such as the Anti-Defamation League (ADL) and Southern Poverty Law Center (SPLC) have lobbied the federal government to adopt for years.

Although threats emanating from foreign terrorist organizations remain a priority, added DHS, domestic terrorists and homegrown extremists, driven by a variety of ideologies, comprise a “growing share of the threat to the Homeland.”

This newspaper has repeatedly debunked the myth that so-called white supremacism is a threat to the country, something that groups like the ADL and the SPLC seek to perpetuate in order to raise money by frightening liberals. The reality is that violence carried out by crazed individuals is not a significant threat to the population at large, and that most people who do harbor views that could be considered racist tend to be law-abiding and peaceful.

But what was not reported by almost all of the media outlets in the United States was that DHS specifically cited “anti-government/anti-authority violent extremism,” which has been an additional “significant motivating force behind domestic terrorism.” Officials referred to the antifa-inspired attempted firebombing of an ICE facility in Washington earlier this year, which this paper reported on at the time.

AFP has repeatedly outed the major media outlets and “pundits” that defend and enable violence carried out by the radical, far-left organization. Highly paid talking heads from CNN, MSNBC, and NBC as well as journalists from major U.S. newspapers have all come to the defense of this group of black-clad, masked individuals, who can be seen on video beating up and harassing innocent people as well as police. As noted, one antifa member went so far as to firebomb a U.S. immigration facility and shoot at law enforcement officials.

Now, U.S. law enforcement is at least acknowledging the growing threat from this organization—but it comes a little too late for the thousands of victims antifa has already terrorized. 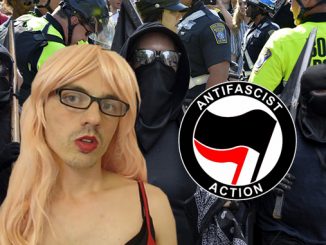