Proof continues to come to light that America has transformed into an outright anarcho-tyranny in which the rule of law is strictly enforced against average citizens while mobs of vandals and looters engage in criminality and destruction with impunity.

A couple in northern California made national news following an incident that took place on July 4 in front of the Wakefield Taylor Courthouse in downtown Martinez, a town in Contra Costa County, Calif. David Nelson, 53, and his partner Nicole Anderson, 42, both lifelong residents of Martinez, have had enough of the destructive Black Lives Matter (BLM) movement and its activists forcing their misguided and divisive agenda on the country.

On July 1, a permit was issued by the City of Martinez to a local resident to paint a Black Lives Matter “mural” on the street in front of the courthouse. Similar murals have been created in major cities around the country, including in New York City near Trump Tower, where radical leftist Mayor Bill de Blasio reportedly has 27 NYPD officers guarding the mural while violent crime skyrockets in the city.

Activists painted the mural in Martinez on July 4. Following its completion, Nelson and Anderson decided to take matters into their own hands. They drove down to the mural with paint and other supplies, and Anderson proceeded to paint over a portion of the mural. Several BLM supporters confronted the couple and video-recorded the incident, which went viral online.

Days later, the Office of the District Attorney in Contra Costa County issued a press release announcing “hate crime” and vandalism charges against both Nelson and Anderson for their actions.

“The Black Lives Matter movement is an important civil rights cause that deserves all of our attention,” Contra Costa District Attorney Diana Becton stated in the press release announcing the criminal charges. “The mural completed last weekend was a peaceful and powerful way to communicate the importance of the black lives in Contra Costa and the country. We must continue to elevate discussions and actually listen to one another in an effort to heal our community and country.”

Nelson has lost his job following the publicity surrounding the incident, while Anderson has been formally charged for painting over the BLM mural. This reporter spoke with Nelson to get a better understanding of the situation and what motivated the couple to stand up to the BLM madness being forced upon the country.

“When I saw there had been BLM graffiti painted on our street in downtown Martinez, it struck a chord with me,” Nelson explained. “Nicole and I were already fed up with the destruction caused by BLM and its followers across the country. Looting, rioting, burning down buildings, monuments, and statues, and causing death to innocent people. We couldn’t take it anymore, especially in our town.”

After the mural was completed in their hometown of Martinez, Nelson and Anderson decided to stage a protest of their own.

“Nicole immediately got together some paint and a roller to undo the politically divisive and terrorist graffiti off our street,” Nelson noted. “I went down there to have her back. The rest is history, more or less.”

Since late May, following the death of George Floyd, a career criminal and drug user who died while in the custody of Minneapolis police, BLM and other radical left-wing terrorists have engaged in outrageous acts of criminality, violence, looting, and vandalism, resulting in the destruction of countless private businesses and public spaces across the country, most often with impunity. The political, media, and corporate establishment in America has largely endorsed and supported the divisive and destructive movement, which has alienated many patriotic Americans.

“Black Lives Matter means different things to different people because it’s intentionally deceptive,” Nelson told this reporter. “At its core, BLM is a Marxist organization with the intention of erasing our history and tearing down our government. BLM is not only funded in part by terrorists, both internationally and locally, they have also drawn massive support from mega-corporations, small businesses, and unsuspecting Americans. They have a clever name that is nothing more than a cover. They could care less for the average black man, woman or child. Only when a black man dies at the hands of a white cop do they raise a stink.”

Nelson argued that BLM has “turned many people against white Americans in particular,” and insisted that the Marxist notion of white privilege is “ridiculous.”

“BLM wants to divide our great country, defund our police, and do away with the prison system,” Nelson concluded. “They clearly have a political agenda that aims to abolish the Constitution and undermine the rule of law. They have infiltrated our government, institutions, and our society, and must be viewed as an imminent threat to our freedom and way of life.”

Nelson and Anderson have set up a fundraiser to help support their legal efforts against the Contra Costa District Attorney’s Office. 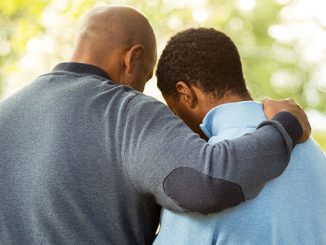