Multiple men claim they are the cult leader’s legitimate heirs. Even in death, Manson remains at the center of controversy.

When Charles Manson died at 83 in November, the controversies surrounding his life should have ended. Yet, in death as in life, Manson’s funeral, remains, and estate were almost instantly in legal limbo since his demise from respiratory failure- and colon cancer-induced cardiac arrest.

As someone who knew Manson and had communicated with and interviewed him many times, Nikolas Schreck, the author of The Manson File: Myth and Reality of an Outlaw Shaman, has been troubled by the events surrounding Manson’s death.

In an email exchange with this writer, Schreck wrote, “No matter what anyone thinks of Manson, all of this is an indignity no human being should have ever been subjected to.”

Toward the end of his life, Manson’s health had been waning. California prison officials had released little information, citing state and federal medical privacy laws that prohibit the California Department of Corrections “from commenting on protected health information for any inmate in our custody.”

Now that Manson’s life has ended, researchers and officials may delve deeper into his medical and psychological history.

The funeral for Manson was stalled for four months over legal wrangling regarding the body—and the organization of the publicity. Entertainment website “TMZ” reported that the body had already decomposed badly and required heavy makeup and gloves. Manson’s former fiancé Afton Burton and Manson “family” member Sandra Good were reportedly in attendance.

The battle for the body and the valuable estate commenced almost immediately upon Manson’s death. Schreck supported the legal claims of Michael Brunner, Manson’s son by Mary Brunner, as what he called “the only legitimate heir.” Brunner was born Sunstone Hawk, also known as Michael Valentine Manson, and was the only child reared by Manson at Spahn Ranch. The court ruled in favor of Jason Freeman, who the media referred to as “Manson’s grandson.” What Freeman did with the body and then allowed at the funeral disgusted Schreck.

“As it turns out, as soon as Freeman won the case, he ordered Manson’s body embalmed (after four months of rotting at a county coroner morgue, refrigerated but not frozen!) so that he could film it for a trash reality TV show called ‘Manson’s Bloodlines,’ ” Schreck wrote. “As I soon discovered, the entire funeral was a phony film shoot paid for and organized by a film production company solely so that they could get footage of Manson’s corpse for their sleazy documentary. It is a grotesque tale of media exploitation that embodies our fake reality TV age. Ultimately, the ‘grandson’ and his partners in crime have sunk so low as to provide some of Manson’s remains to true crime ‘murderabilia’ collectors.”

Schreck calls the evidence that Freeman is the biological grandson of Manson “flimsy” and states that the relationship of Freeman to Manson has never been proven through DNA testing.

Manson had three children: Michael Brunner; Charles Manson Jr., who changed his name to Jay White and committed suicide in 1993; and Luther, born to Manson’s wife, Candy, a prostitute in the Manson stable in the late 1950s and early 1960s.

Much of the debate over the remains and estate evolved from Manson’s own personal communication and his propensity to waver emotionally. Manson pen pal Michael Channels possessed a will dated Feb. 14, 2002, that leaves the body and the estate to him. In contrast, Manson’s friend Ben Gurecki also had a will, dated January 2017. In it, Manson leaves the body and estate to Matthew Roberts, who alleged that he, too, was Manson’s son.

CNN sponsored a DNA screening to resolve the question of Freeman’s relationship to Roberts, who believes that Charles Manson Jr. (Jay White) was his father. Tests proved that Freeman and Roberts did not have a shared ancestry. Roberts was the one disappointed, as it, to him, also revealed that he did not know the real identity of his father. However, if Freeman also has no proof of lineage from Manson, the results simply just show that Freeman and Roberts are not related. They neither prove nor disprove that either is related to Manson.

Freeman had originally agreed to have Manson cremated, which he did on March 20—after maximizing the profits and media attention from the funeral, the murderabilia collectors, and the estate. Unfortunately for Schreck and many other friends and researchers of Manson’s who simply wanted the body respected, Kern County courts ruled that Freeman is the heir.

Manson’s legacy can and will be debated for decades. The Los Angeles Times article announcing the death led with “Mass killer Charles Manson . . . .” The death was another opportunity for the mainstream media to praise Vincent Bugliosi, the district attorney who prosecuted Manson and then wrote the book Helter Skelter about the case. Schreck has spent over 1,000 pages debunking Bugliosi’s myth, an updated edition of which will be available soon. 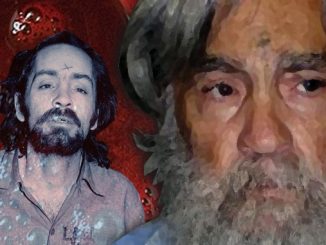