On Jan. 1,  four black men and women  kidnapped and tortured a special-needs white man and broadcast their brutality live on Facebook. The mainstream media has reluctantly reported that the group has been charged with hate crimes and will be in court on Jan. 6, according to law enforcement officials in Chicago, the city where the atrocity took place.

Hate crime charges have been brought against four black Chicago-area residents just days after a gruesome video broadcast on Facebook Live and spread on social media and video sharing sites went viral. The roughly 30-minute video, originally broadcast live to the world on the Facebook page of one of the criminals arrested, documents the savage beating and torturing of an 18-year-old white man with special needs. 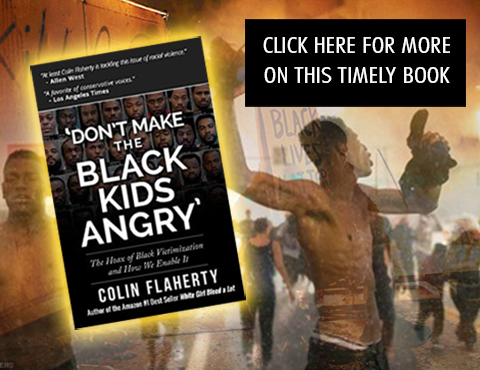 In the video, the young white man is shown tied up and cowering in the corner of an apartment with his mouth covered with plastic. He is beaten, slapped, and verbally assaulted. At one point, his attackers slice his sweatshirt open with a knife and eventually cut a chunk of his scalp and hair off of his head. During the vicious attack, the black criminals can be heard shouting, “F*ck Donald Trump!” and “F*ck white people!” The perpetrators also degraded and humiliated the young man, forcing him to drink toilet water, kiss the floor, and denounce President-elect Donald Trump.

Yesterday, hate crime charges were filed against the four perpetrators. Incredibly, police officials in Chicago and media pundits originally debated whether or not the crimes depicted in the video and later admitted to by the perpetrators amounted to a hate crime. However, the racially and politically motivated nature of the crime was simply too obvious to ignore.

The suspects in the case include Jordan Hill, 18, Tesfaye Cooper, 18, Brittany Covington, 18, and Tanishia Covington, 24. Covington streamed segments of the vicious assault and torture on her personal Facebook page using Facebook Live. The video has since been removed by Facebook, and has been censored by YouTube, though people keep posting it nonetheless on those sites.

All four suspects have been charged with a hate crime, felony aggravated kidnapping, aggravated unlawful restraint, and aggravated battery with a deadly weapon. Hill, Cooper, and Covington have also been charged with residential burglary after barging into the apartment of a neighbor who complained about the noise emanating from the apartment in which the attack was occurring. Hill faces an additional charge of possession of a stolen vehicle.

According to police and the victim’s parents, the 18-year-old victim was dropped off at a McDonald’s on New Year’s Eve where he met up with Hill, a fellow classmate. Hill was driving a stolen van, and eventually took the victim to Covington’s apartment in Chicago where the vicious assault and barbaric torture took place. After a neighbor’s door was kicked down following her complaints of noise coming from the apartment where the attack took place, the police were called.

The victim was found on the street near the apartment on Monday afternoon wearing only an inside-out tank top, shorts, and sandals, despite the frigid temperatures. Police approached the young man, who was obviously disoriented, bloodied, and battered, and took him to the hospital. Police became aware of the video of the beating and torture on Tuesday, and arrested the perpetrators shortly thereafter.

Hill, Cooper, and the two Covington sisters are scheduled to appear in court on Jan. 6.

The barbaric attack, which was clearly racially and politically motivated, has sparked outrage across the country. The fake news media has tried their hardest to downplay the racial and political nature of the heinous crime, emphasizing the fact that the young white victim was mentally challenged, which they claim may have motivated the attack.

Symone Sanders, a black political commentator and former national press secretary for Bernie Sanders, recently appeared on CNN and questioned whether or not the outrageous violence depicted in the video of the attack did in fact constitute a hate crime, despite the explicit statements of the perpetrators. During another appearance on CNN in mid-November, Sanders mocked and dismissed a white man in Chicago who was viciously beaten by a group of blacks in yet another politically motivated hate crime. The double standards and hypocrisy of the left and fake news media could not be more obvious.

While the controlled mainstream mass media and radical leftist agitators continue to hype manufactured and, in many cases, entirely fabricated “hate crimes” purportedly carried out by Trump supporters, actual violence carried out by non-whites against whites continues unabated. White Trump supporters have been victimized across the nation throughout the election cycle and even after the election, which has largely been either ignored, downplayed, or—amazingly enough—justified by the radical left and their spokespersons in the mass media.

John Friend is a writer, who lives in California.