It goes without saying that the killing of innocent Americans is reprehensible, and police who abuse their power and wantonly take lives deserve to be prosecuted to the fullest extent of the law. But are police officers—specifically white police officers—really shooting and killing young black males at levels rivalling the U.S. Covid-19 pandemic?

On June 1, the multi-billion-dollar pop commentary and entertainment website “Vox” interviewed Harvard epidemiologist Maimuna Majumder. She told the far-left media outlet, “One in every 1,000 black men and boys can expect to be killed by police in this country. To me, this clearly illustrates why police brutality is a public health problem; anything that causes mortality at such a scale is a public health problem.”

Ms. Majumder may be good at tracking SARS-CoV-2, the virus that causes Covid-19, but when it comes to tracking police shootings, her figures are way off.

Census figures show that there are 21 million black males in the U.S. According to private firm Statista, which specializes in compiling and tracking trends around the world, in 2019, only 235 black people were killed at the hands of police. In 2018, that number dropped to 209, and in 2017, it was 223. 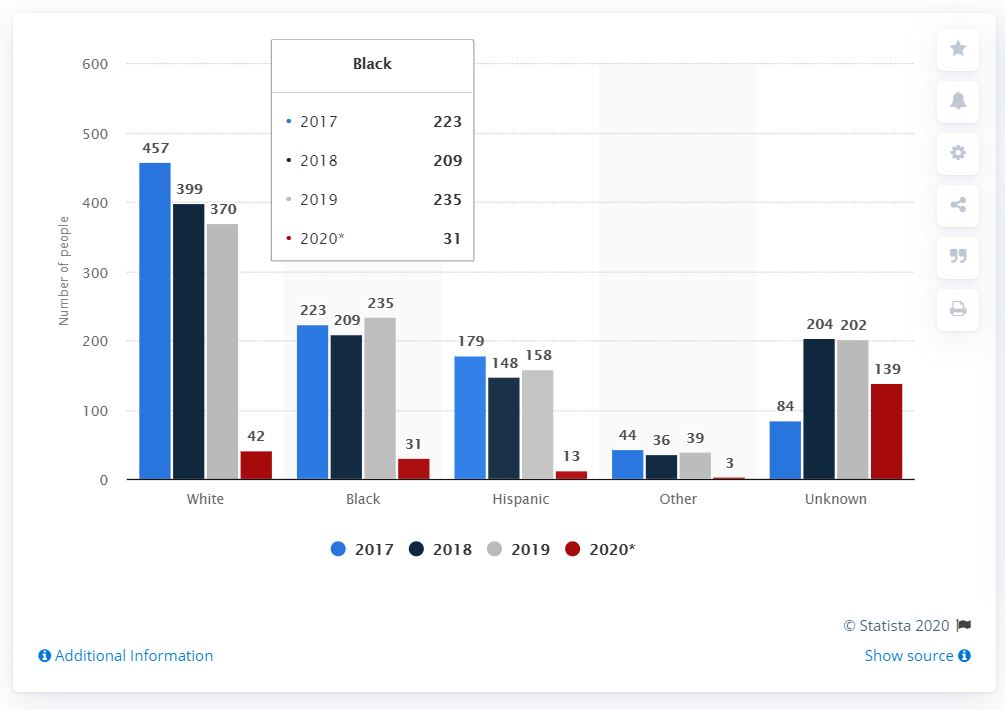 The takeaway from this is clearly that police kill a tiny fraction of the U.S. population every year. How many are innocent is obviously not known, but we cannot forget that there are bad people out there. Police work is an extremely difficult job, and police officers have a legal right to use force when attempting to arrest people—especially when suspected criminals resist violently.

AFP has reported at length on the militarization of police forces across the country. With crime rates in the country at historic lows, a discussion needs to be had about the use of excessive force in law enforcement. Police killing innocent people is a tragedy and should be condemned in no uncertain terms, but facts don’t lie. The killing of all races of Americans at the hands of police officers is statistically small.

Elders rightfully notes that police killings of black males has been at an all-time low since at least the 1970s.

2 Comments on Are Police Killing of Young Black Males Really at Epidemic Levels?