It is evident that powerful players intend to destroy President Donald Trump. Similar to the “deep state conspiracy” that eventually took down President Nixon, Buchanan explains, “If you wish to see the deep state at work, this is it: anti-Trump journalists using First Amendment immunities to collude with and cover up the identities of bureaucratic snakes out to damage or destroy a president they despise.”

“It is becoming more obvious with each passing day that the men and the movement that broke Lyndon Johnson’s authority in 1968 are out to break Richard Nixon,” wrote David Broder on Oct. 8, 1969.

“The likelihood is great that they will succeed again.”

A columnist for The Washington Post, Broder was no fan of Nixon.

His prediction, however, proved wrong. Nixon, with his “Silent Majority” address rallied the nation and rocked the establishment. He went on to win a 49-state victory in 1972, after which his stumbles opened the door to the establishment’s revenge.

Yet, Broder’s analysis was spot on. And, today, another deep state conspiracy, to break another presidency, is underway.

Consider. To cut through the Russophobia rampant here, Trump decided to make a direct phone call to Vladimir Putin. And in that call, Trump, like Angela Merkel, congratulated Putin on his re-election victory.

Instantly, the briefing paper for the president’s call was leaked to the Post. In bold letters it read, “DO NOT CONGRATULATE.”

How could Trump congratulate Putin, whose election was a sham? Why did he not charge Putin with the Salisbury poisoning? Why did Trump not denounce Putin for interfering with “our democracy”?

Amazing. A disloyal White House staffer betrays his trust and leaks a confidential paper to sabotage the foreign policy of a duly elected president, and he is celebrated in this capital city.

If you wish to see the deep state at work, this is it: anti-Trump journalists using First Amendment immunities to collude with and cover up the identities of bureaucratic snakes out to damage or destroy a president they despise. No wonder democracy is a declining stock worldwide.

And, yes, they give out Pulitzers for criminal collusion like this.

The New York Times got a Pulitzer and the Post got a Hollywood movie starring Meryl Streep, for publishing stolen secret papers from the Pentagon of JFK and LBJ—to sabotage the Vietnam War policy of Richard Nixon.

Why? Because the hated Nixon was succeeding in extricating us with honor from a war that the presidents for whom the Times and Post hauled water could not win or end.

Not only have journalists given up any pretense of neutrality in this campaign to bring down the president, ex-national security officers of the highest rank are starting to sound like resisters.

Ex-CIA Director John Brennan openly speculated Tuesday that the president may have been compromised by Moscow and become an asset of the Kremlin.

“I think he’s afraid of the president of Russia,” Brennan said of Trump and Putin. “The Russians, I think, have had long experience with Mr. Trump and may have things they could expose.”

If Brennan has evidence Trump is compromised, he should relay it to Robert Mueller. If he does not, this is speculation of an especially ugly variety for someone once entrusted with America’s highest secrets.

What is going on in this city is an American version of the “color revolutions” we have employed to dump over governments in places like Georgia and Ukraine.

Goal: Break Trump’s presidency, remove him, discredit his election as contaminated by Kremlin collusion, upend the democratic verdict of 2016, and ash-can Trump’s agenda of populist conservatism. Then, return America to the open borders, free trade, democracy-crusading Bushite globalism beloved by our Beltway elites.

Trump, in a way, is the indispensable man of the populist right.

In the 2016 primaries, no other Republican candidate shared his determination to secure the border, bring back manufacturing or end the endless wars in the Middle East that have so bled and bankrupted our nation.

Whether the Assads rule in Damascus, the Chinese fortify Scarborough Shoal, or the Taliban return to Kabul are not existential threats.

But if the borders of our country are not secured, as Reagan warned, in a generation, America will not even be a country.

Trump seems now to recognize that the special counsel’s office of Robert Mueller, which this city sees as the instrument of its deliverance, is a mortal threat to his presidency.

Mueller’s team wishes to do to Trump what Archibald Cox’s team sought to do to Nixon: Drive him out of office or set him up for the kill by a Democratic Congress in 2019.

Trump appears to recognize that the struggle with Mueller is now a political struggle—to the death.

Hence Trump’s hiring of Joe diGenova and the departure of John Dowd from his legal team. In the elegant phrase of Michael Corleone, diGenova is a wartime consigliere.

He believes that Trump is the target of a conspiracy, where Jim Comey’s FBI put in the fix to prevent Hillary’s prosecution, and then fabricated a crime of collusion with Russia to take down the new president the American people had elected.

The Trump White House is behaving as if it were the prospective target of a coup d’etat. And it is not wrong to think so. 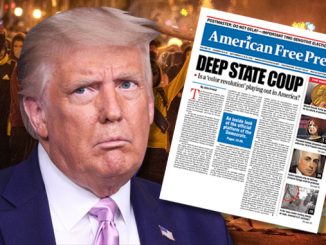 2 Comments on Will the Deep State Break Trump?