With the South African government intent on giving all of the nation’s farmland to blacks and white farmers being slaughtered in heinous, horrible violence, Russian President Vladimir Putin has opened his nation’s doors to South Africa’s white population. Now, about 15,000 Boers are planning to take advantage of Putin’s offer and take sanctuary in greener—and safer—pasture in an agricultural grassland region of Russia.

For many South African farmers, who have witnessed their country descend from a first-rate economic marvel to a country now barely registering on the Human Development Index—with an unemployment rate approaching 60%—enough is enough. A good number of these hard-working folk have pulled up stakes and headed to the Russian grasslands between Ukraine and Kazakhstan, where more than 65% of the land is dedicated to agriculture.

A large part of the exodus has been brought on by South Africa’s government, led by President Cyril Ramaphosa, who “has pledged to return the lands owned by white farmers since the 1600s to the black citizens of the country.” The South African government “is planning to put an end to what it calls the legacy of apartheid, where most of South Africa’s land is still in the hands of its minority white population.”

Ever since blacks supplanted whites in South Africa’s governing structure, the country has been on a downward tear, with regular rolling electricity blackouts and the world’s highest murder rate, as well as one of the highest rates of rape on the planet. Sadly, children make up a large percentage of rape victims in South Africa, believed to be a result of a myth that having sex with a virgin female cures a man of AIDS and other sexually transmitted diseases; if a woman is raped, there is a 25% chance her attacker had AIDS. Although signs are posted throughout the country explaining that raping children will not cure AIDS, this heinous crime continues to increase.

Carjackings and kidnapping are now an everyday occurrence with which the white minority has had to contend since blacks took over. A notable part of the obscene murder rate in South Africa is the assault on white farmers.

Last year this newspaper interviewed 47-year-old South African Simon Roche (pronounced “rosh”), who along with his group Suidlanders (pronounced “sightlahnders”), believe their country is on the verge of complete collapse, and they need to prepare for a civil war between blacks and whites.

Roche explained to this reporter that while around 80% of South Africa’s 55 million inhabitants are black, and while whites comprise a mere 8.1% of that total, the murder rate is “something like 1,370% greater than the murder rate of all Americans, regardless of what race they are and by which race they are murdered.”

Roche highlighted how stark the South African murder rate is for this reporter by noting that, as of a year ago, “Over 74,000 white people have been murdered by black people since the beginning of this new South African ‘rainbow nation’ multiracial democracy.”

Many of those brutally murdered have been farmers—which is why they are heeding Russia’s offer—although you wouldn’t know it if you relied on the fake news media’s reporting on this tragedy. All of the corrupt media refers to the targeted murders as a “conspiracy theory” dreamed up by white nationalists and that “farm attacks are part of a broader crime problem in South Africa, and do not have a racial motivation.”

An Aug. 22 tweet this year from President Donald Trump helped to shine the light on this fake news media blackout. He wrote, “I have asked Secretary of State [Pompeo] to closely study the South Africa land and farm seizures and expropriations and the slaughter of farmers.”

This past July, a few weeks before Russian President Vladimir Putin visited Johannesburg for an economic summit, a group of 30 South African farm families visited Russia, claiming they face “violent attacks and death threats at home,” making the case for the more than 15,000 Boers who are planning to move there.

Putin’s government made it easier for South Africans to visit his country when, this past April, they “scrapped tourist visa requirements . . . meaning all planned visits by South Africans are no longer reviewed in advance.” Currently, fewer than 10,000 South Africans live in Russia. 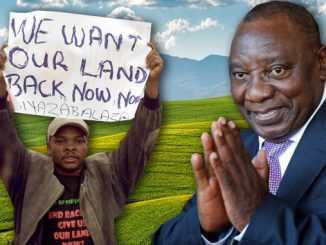